November 24, 2012
4
Story about tank PT-76 would be incomplete without mentioning two floating combat vehicles, although formally and not structurally related to it, but, nevertheless, continued this direction in the domestic tank building.

In the middle of the 1970-ies, marines and airborne troops expressed their interest in a well-armed and adequately protected floating combat vehicle. So, to the requirement of buoyancy added and the requirement of aerotransportability. Apparently, the airborne troops, dynamically developing in those years both quantitatively and qualitatively, became the main developer of tactical and technical requirements. 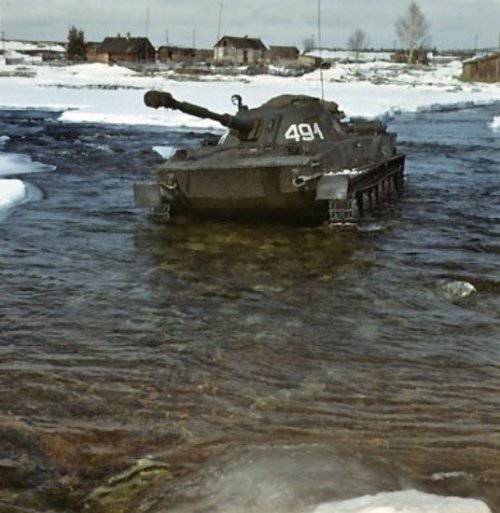 In accordance with them, in 1975, on VgTZ under the supervision of Chief Designer A.V. Shabalina designed and manufactured a prototype of a light airborne amphibious tank under the symbol “934 object”. Its welded hull and turret are made of aluminum alloy, which provides protection against armor-piercing shells of 23 mm caliber at a distance of 500 m. Steel linings are installed in the frontal part of the tower. Combat weight is 17,5 t, the crew - three people.

The turret houses a 100-2, a lightweight 48-mm rifled gun stabilized in two planes of guidance, equipped with a two-chamber muzzle brake, an ejection device for purging the barrel and a loading mechanism. 7,62-mm PKT machine gun is paired with a gun. Ammunition consists of 40 artillery shots (19 of them in the loading mechanism) and 2000 ammunition. A portable Strela-3 air defense missile system and four missiles to it fit inside the tank. The gun is equipped with an 2-43 electro-hydraulic two-stage stabilizer. For firing from a cannon and a machine gun, a laser sight is used - a TPD-K1 range finder and a ballistic computer. The car has a full range of night vision devices, an automatic software system and an ESD system. 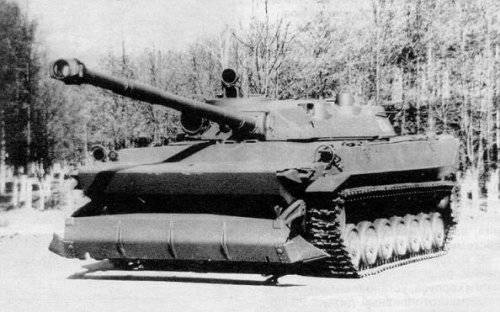 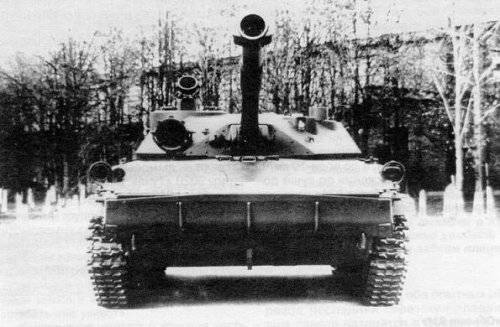 The four-stroke multi-fuel diesel 2В-06 with turbocharging and air cooling in the heat exchanger is installed in the engine-transmission compartment located in the aft part of the hull. Engine power - 400 HP Transmission - manual, with a two-line mechanism for gears and turns. Suspension - pneumohydraulic, provides variable ground clearance ranging from 120 to 530 mm. A water jet is used for driving on water.

Installing a powerful engine (power density - 22,8 hp / t) and modern transmission provides the maximum speed of movement on land 70 km / h, and on water 10 km / h. Cruising when driving on land reaches 600 km. The “934 object” is equipped with built-in equipment for self-digging with a hydraulic drive. The design of the tank is adapted to airborne parachuting.

In 1976, a prototype KSHM “934 object” was made on the basis of the “940 object” at VgTZ. In the armored wheelhouse, located in the forward part of the body, there are three isolated compartments - control, command-staff and communications. An 7,62-mm PKB machine gun was installed on the cabin roof, on a swivel, and on its stern wall were smoke grenade launchers of the 902В “Tucha” system. In general, the layout of the "940 object" strongly resembles the BTR-50PU.

In parallel with the “934 object” on the same technical task in 1975, at Kurganmashzavod under the direction of the chief designer A.A. Blagonravov designed and manufactured a prototype of a light amphibious tanker, the “685 object”.

The 16,5 t tank has a steel welded hull and turret welded from titanium alloy. Armor provides protection against 23-mm projectiles. Armament: 100-2 48-mm gun (2-48-1), stabilized in two planes, PKT machine gun and Strela-3 SAM system. The ammunition consists of 40 shots, 2000 cartridges and four missiles. The tank is equipped with a loading mechanism, a laser range finder, a night trailer, an air conditioner, PAZ and PPO systems, and a P-123M radio station. 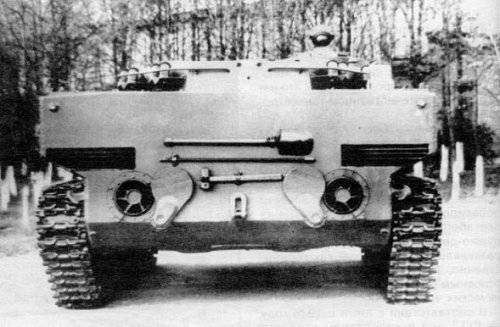 934 object. Back view. The water cannon valves are open. At the stern of the turret two blocks of smoke grenade launchers are clearly visible 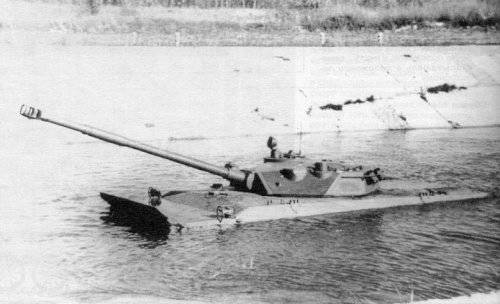 The 934 object is afloat. Because of the large departure of the gun barrel, the tank was kept on an “even keel” only in the position with the cannon forward. When turning the turret, the car acquired a noticeable roll on board and trim aft

Multi-fuel 6-cylinder diesel 2В-06-2 with gas turbine supercharging and intermediate air cooling and manual transmission are located in the rear part of the hull. Individual torsion bar suspension. Water jets are used as a water propeller. The maximum speed when driving on a highway is 70 km / h, afloat - 10 km / h. Cruising on the highway - 600 km.

Tanks - "934 objects" and "685" - were tested, but they were not accepted for service and were not launched into mass production. Being, in fact, representatives of the group of combat vehicles for the so-called rapid reaction forces, they anticipated the appearance in the West of such tanks as the American M8 and Stingray. At the same time, the latter, with the same combat mass and similar weapons with Soviet machines, are not able to swim.

The hull design and the undercarriage of the tank - the “685 object” were subsequently used to create the BMP-3 infantry fighting vehicle (the “688 object”).

Currently, both prototypes of the last Soviet amphibious tanks are in the Military History Museum of Kubinka armored weapons and 8 equipment. There you can see the KSHM - "940 object". 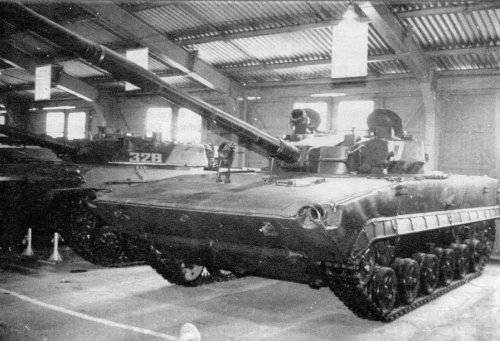 A prototype of a floating tank "object 685" is now in the exposition of the Military History Museum of armored weapons and equipment in Kubinka. You can also see the “934 object” (in the background)