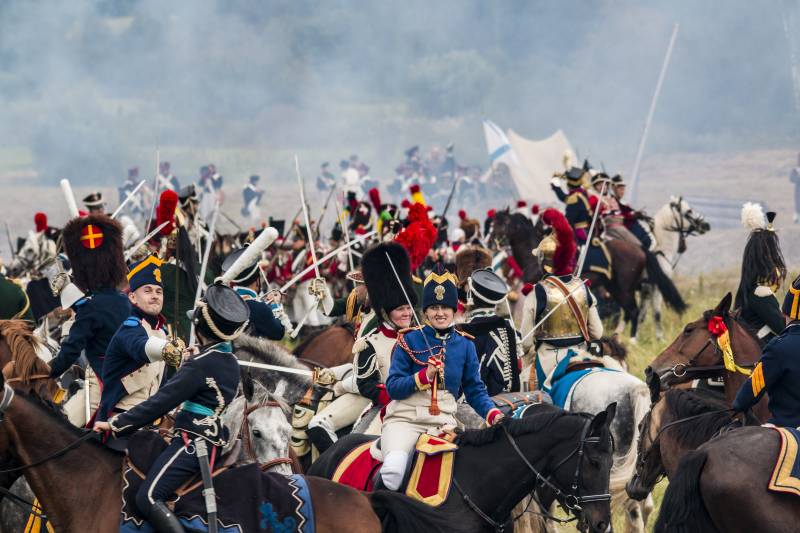 Sunday, September 3, ended the militaryhistorical Borodino-2017 festival dedicated to the 205th anniversary of the battle. And today's material is like a pen test in a chronological narrative about this event.

Unfortunately, at the festival in honor of the 200 anniversary of the battle, we were not present, as well as the rest. Correct and enlighten.

6-00.
Behind the usual 600 km, the traffic police ahead of us with flashing lights, immediately blocked the road. “Pushing is not commanded! Is there a pass? ”

This question has already filled the edge. Of course not! But having carefully studied the press certificates, the police begin to think that it is still possible to miss. "And what's in the trunk?" Will you open it? ”Yes, with pleasure! The contemplation of the food character of a gastronomic nature significantly reduces the level of trust in us. Well, are we on the way to eat?

Open the salon. Seeing the tripods, cameras and everything else, the guards of the roads sigh with relief and let us through. 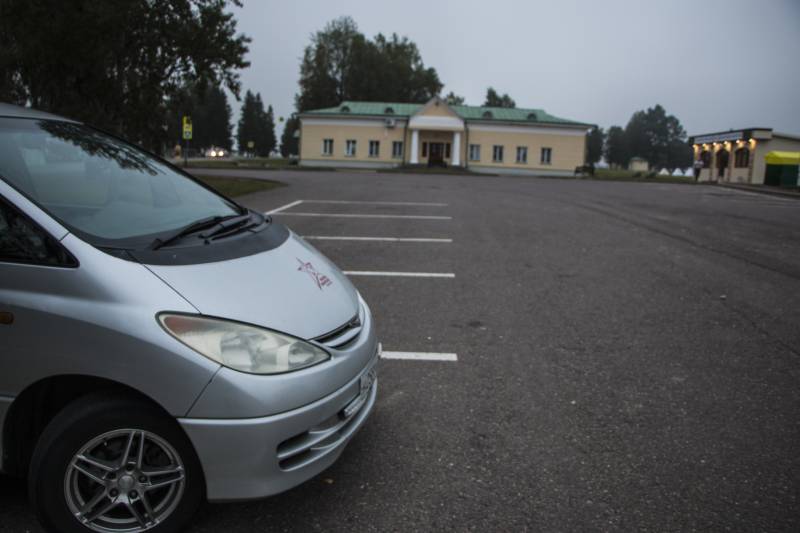 We fly over to the parking lot at the museum, withstand another battle of a similar nature, and exhale. It remains to wait for the museum staff.

7-00.
Joyful such a police colonel still throws us out of the parking lot at the museum. There will be buses and buses only. Where do we go? The colonel does not know, so we drink his blood and nerves for another half an hour and still we move to the field, to the improvised parking lot of “everything” half a kilometer from the museum. Okay, not the first time.

We arrange a sumptuous breakfast on the grass, then we go to spoil the mood of the colonel, demanding the protection of parking. Nothing, y'know ... the Colonel loses some of the charm and joyful mood, but after 20 minutes, there are already three people on the field. To protect and defend the press machine, which slowly begin to pull up.

True, it is worth noting that on the site of the museum there really were only buses with sightseers.

Weather in the meantime, happy with such a fog that the mood to match. 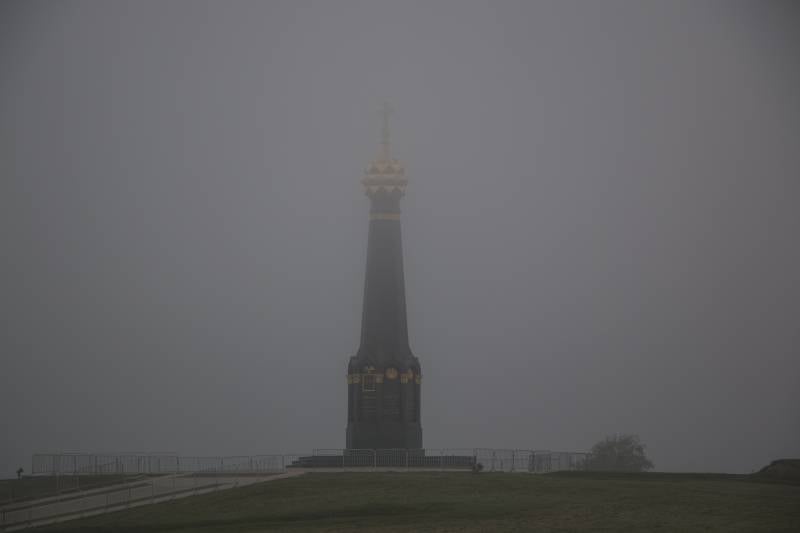 8-00
Arriving museum staff. They hand the accreditation certificates and notify that all movements are either on foot or by bus. Gladly we grab the camera, returning to the parking lot and go to the field, to the camp, where the perturbations already begin.

The camp and interactive sites are somewhat puzzled. For the most part, for some reason, there were opponents of the Russian army with all the consequences. French inscriptions are, of course, historically correct, but not everyone owns them? 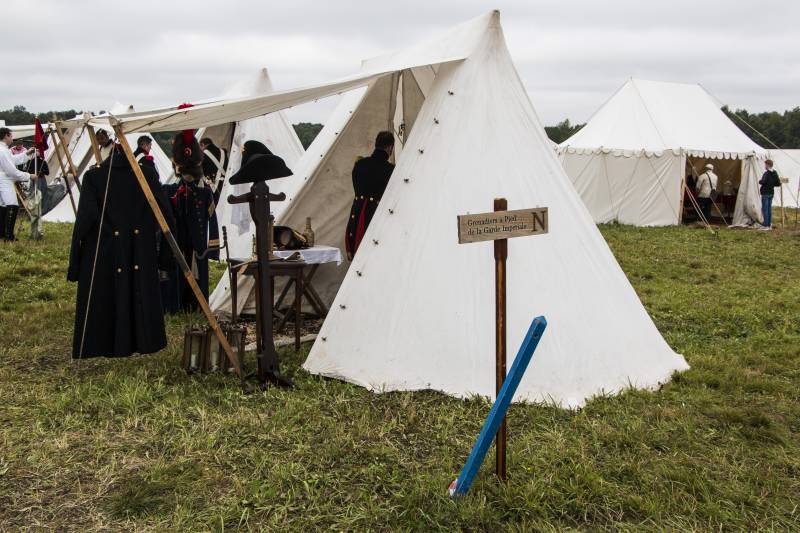 9-00
Began active stirring. Buses with excursions from schools drive up, and in the camp with interactives almost silence. Empty exhibition tents. 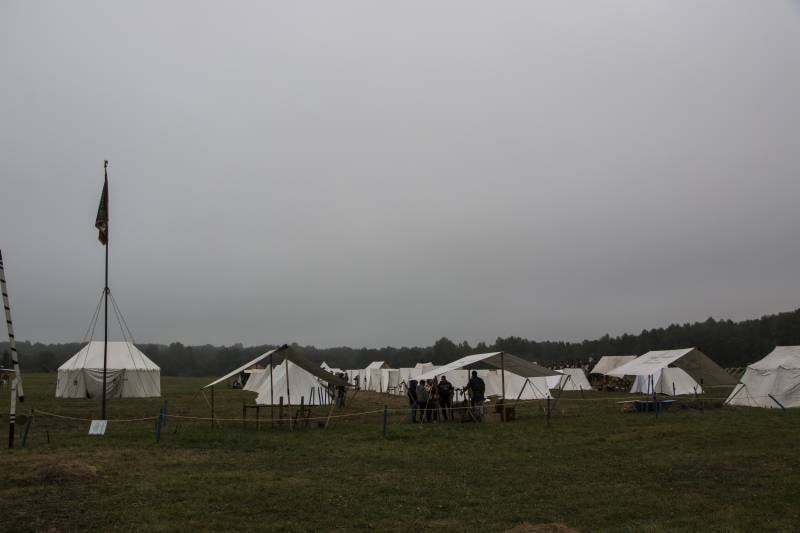 Not quite like one moment yet. It is clear that 360 days in the year, this museum is not much visit. Both in terms of remoteness, and in terms of non-mailing of the event series. And we must earn good money on everything that we can.

We don’t know how much the ticket to the square theater cost, but the admission to the interactive field is 250 rubles. How strange, especially for those who first arrived. Money collected - collected, but to show how there was nothing and no one. Ugly nuance, I must say. For the first or second time it is forgivable, but this was already an 30 event.

But on the other hand, we saw such a thing that we hadn’t seen at the renovations before; moreover, we didn’t even know what it really was. Showers for reenactors. 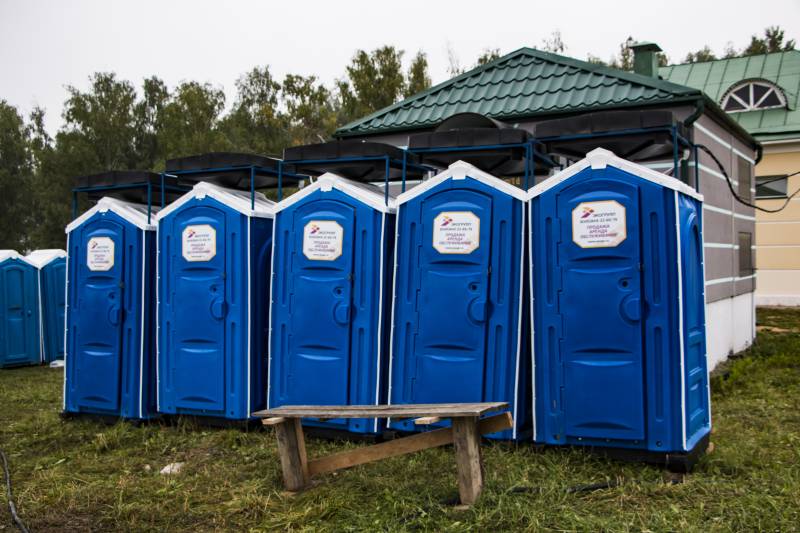 9-30
Grand opening. It went unnoticed by the word “absolutely”, since there was no sound equipment. Just the directorate of the museum and the representatives of the RVIO said a few words, and that was it.

But really interesting business has begun. It became clear why nobody was allowed into the museum.

There was a confectionery exhibition in the museum! 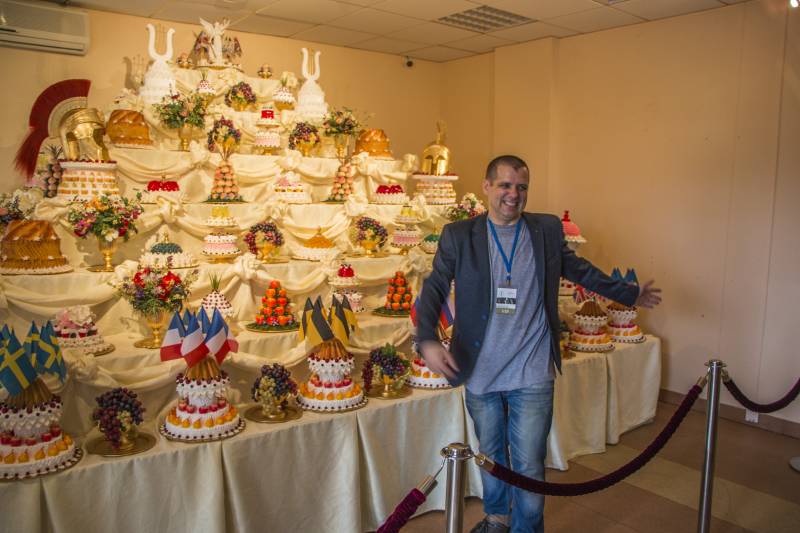 Aldis Brichevs, a connoisseur of historical cooking from Lithuania, restored a fragment of the dessert composition, which Alexander I treated allies at a reception in Vienna on the occasion of the victory.

Gentlemen, monarchists, are you aware that Alexander Pavlovich and his wife Elizaveta Alekseevna were not just sweets, but masters of this work? So we were not ... Now we know.

Just killed the cake 4 x 2 meters (there is a video, I could not push through) with a portrait of the emperor. The cake was then eaten ...

Moreover, especially for the press, Aldis prepared a separate composition from Alexander's favorite desserts. In general, we were fastened for a long time, talking to Master Bricheus and not daring to touch this historical magnificence. 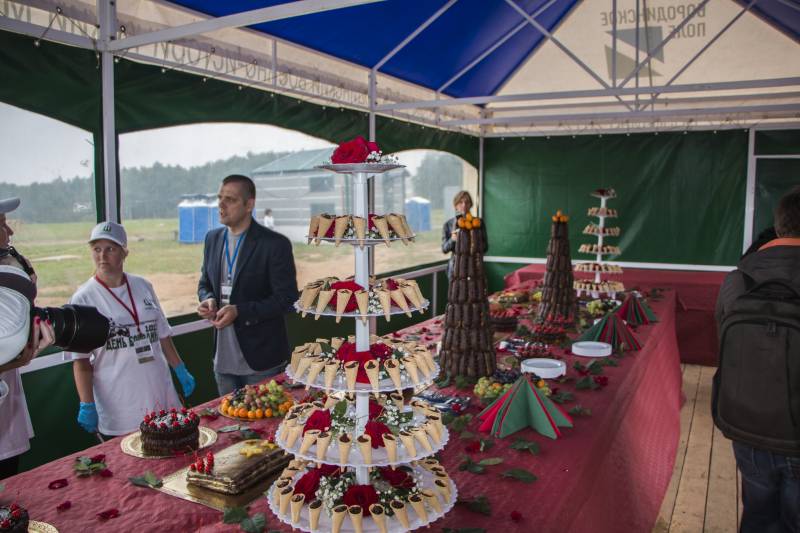 You know, Alexander Pavlovich understood a lot about sweets ...

10-00
We quickly load onto the bus and head to the monument to the “Dead Great Army” in Shevardino. There is something like a lookout of Napoleon's troops and the laying of wreaths at the monument.

The review was conducted, of course, by Bonaparte, together with the military attache of France, Eric Kunzelmann. Here we really felt our inferiority. Understanding of what was happening was not. Not only are we not specialists at all in the forms of the armies of the time, the whole ceremony was held in French. 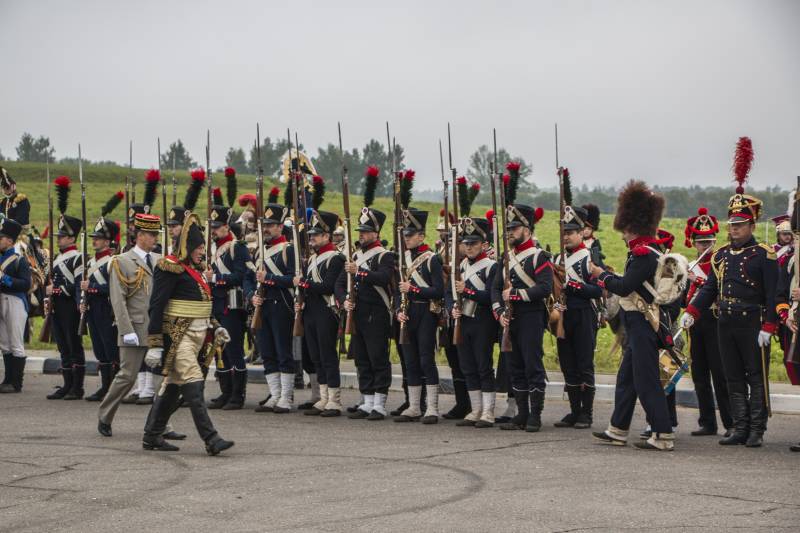 With the exception of Polish ulans, who shouted at everything, “Neh live Polska!”. Well, at least something is clear ...

The military attache said a small speech in Russian. The wreaths were laid by the staff of the French military mission, our orchestra played Marseillaise, the troops marched. Everything. 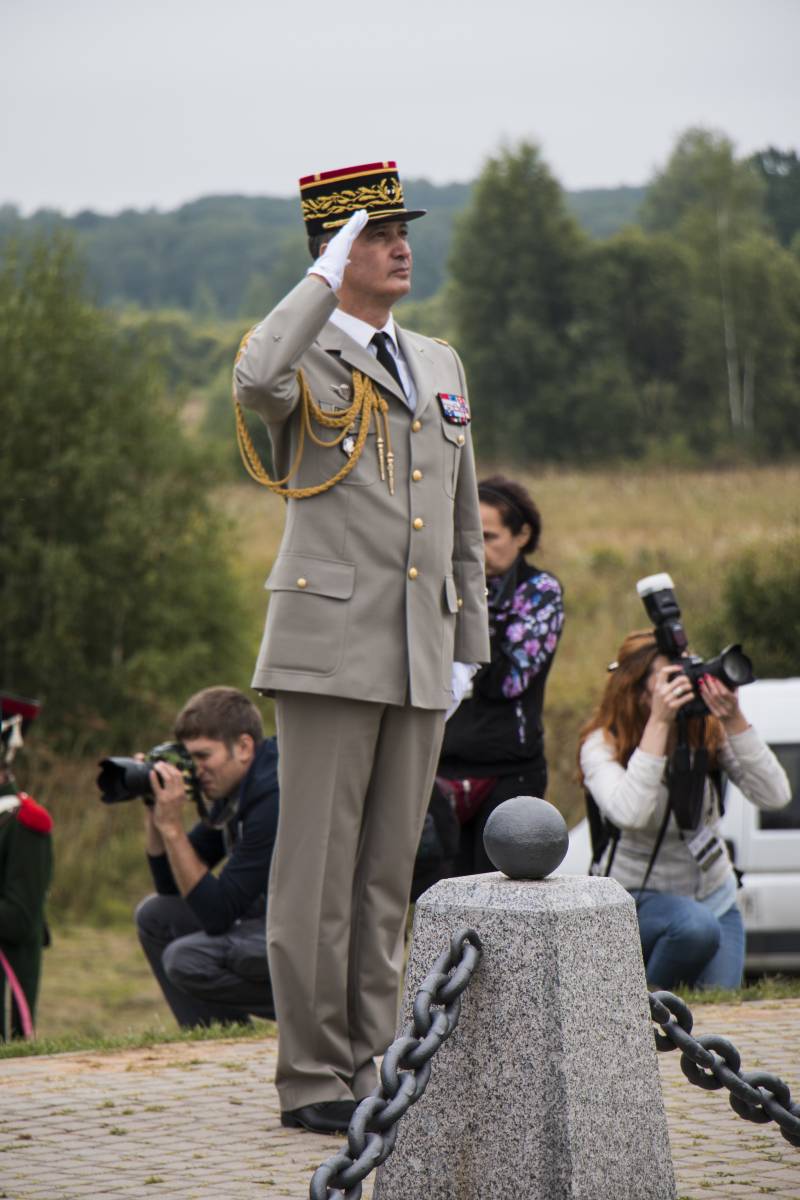 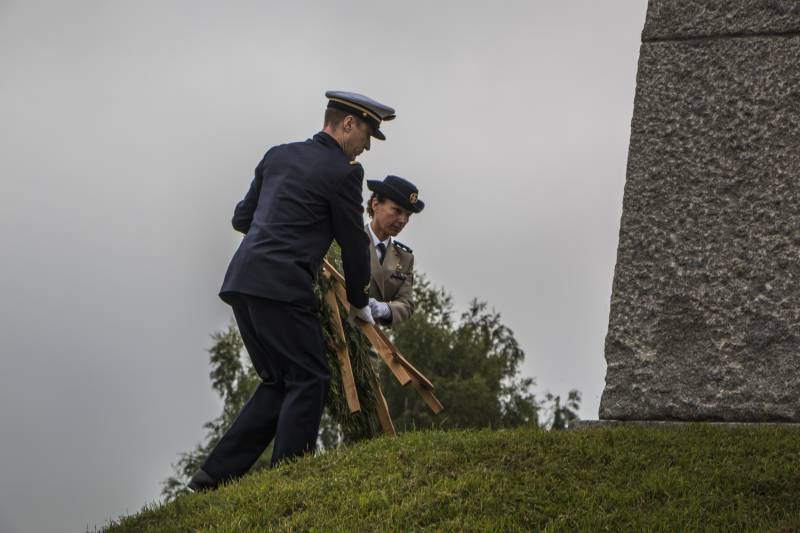 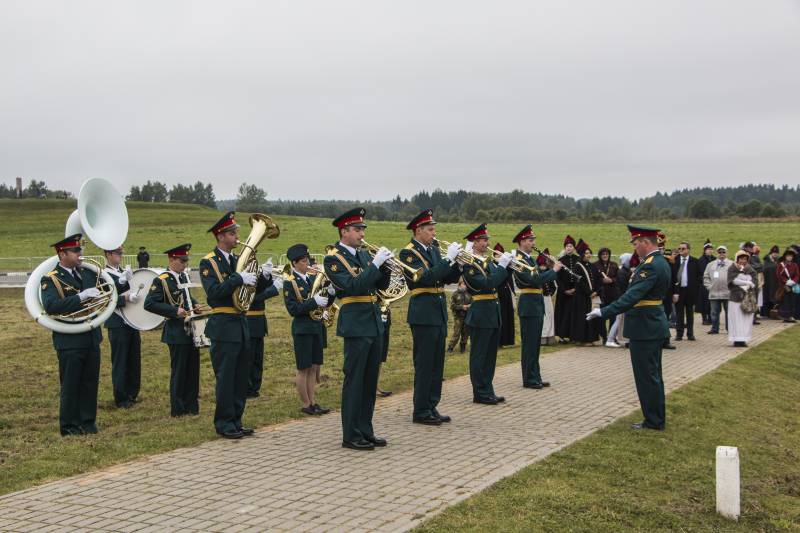 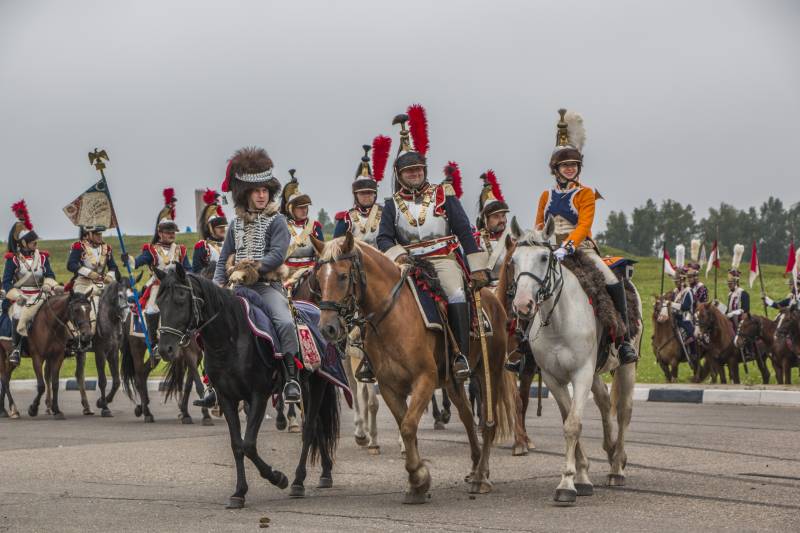 We left with a clear understanding that in order to cover such events, we need to slightly tighten the story. At least in order to understand who is in front of you.

11-00
Interactives came to life almost everything, there appeared shoemakers, masters, drummers, hornmen, blacksmiths. But there was nothing such a masterpiece, although the children had a great interest. 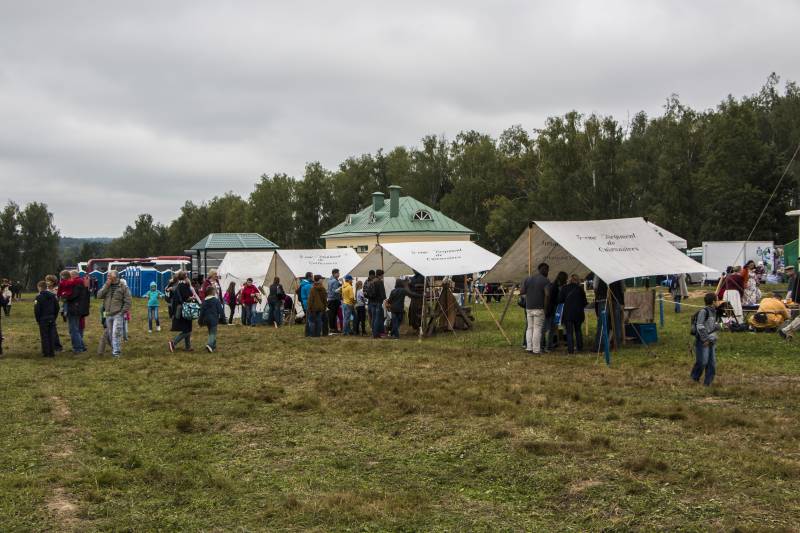 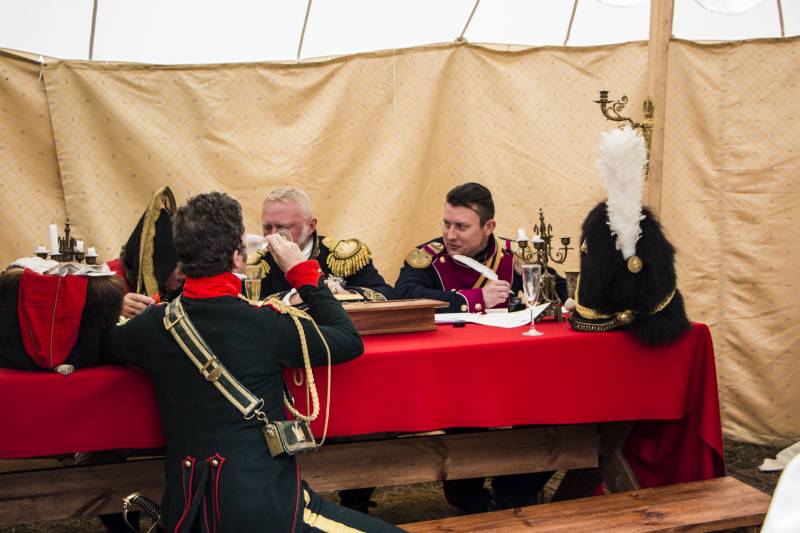 Headquarters tent of the French. All conversations are beautiful, but incomprehensible.

There were more and more people; even at the nursery on the other side of the road, queues formed. Even despite the frankly horse prices (in comparison with the ARMY-2017). Here either the Ministry of Culture did not invite those, or it couldn’t or didn’t want to insist on pricing. 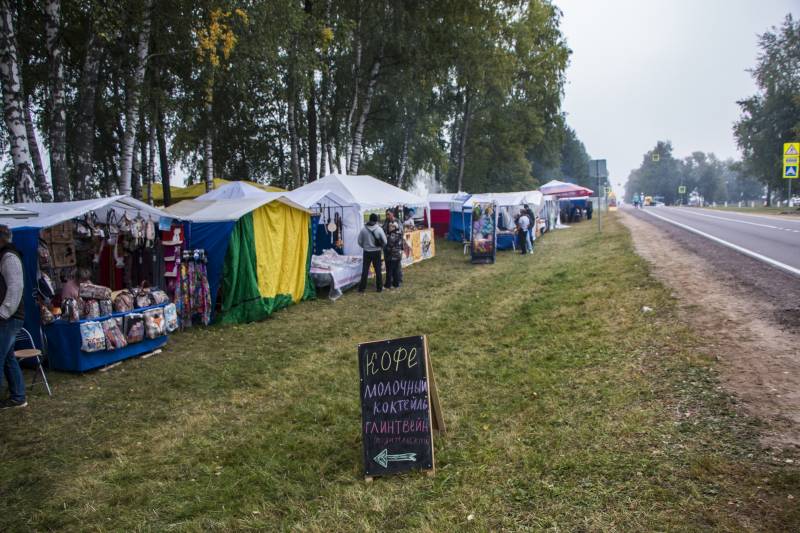 In general, the festival visitor flew not a lot of money. But - dissatisfied people were not observed (well, almost), which means who was driving for what he received.

12-00
A similar event in Shevardino, only in the center of Borodino, on the Raevsky battery. Review of Russian troops, prayer, laying wreaths and flowers at the monument to Russian soldiers.

And then a funny (almost) and sad (for us) event happened. Seeing the columns of the Russian troops leaving the forest to the monument, the people not only rushed to the monument, but made it so that it was possible to envy.

In general, with our equipment, we (like many colleagues) simply didn’t pass through a thousandth crowd. Slowly running. 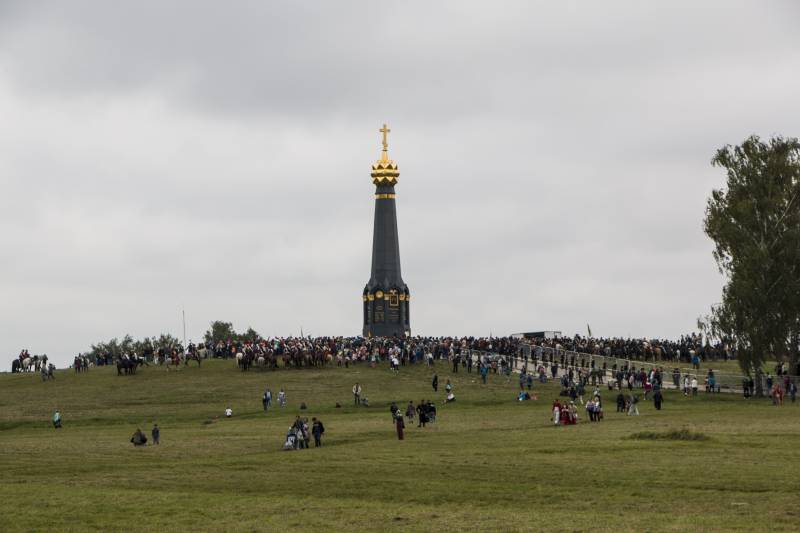 From the event in Shevardino did not differ almost anything, a few speeches, prayer, laying on. After that, the soldiers went to the battlefield, to the square-theater. 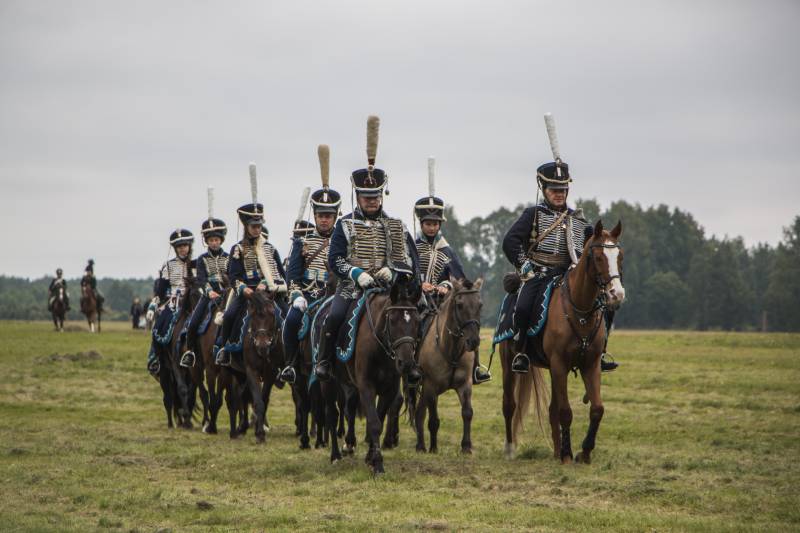 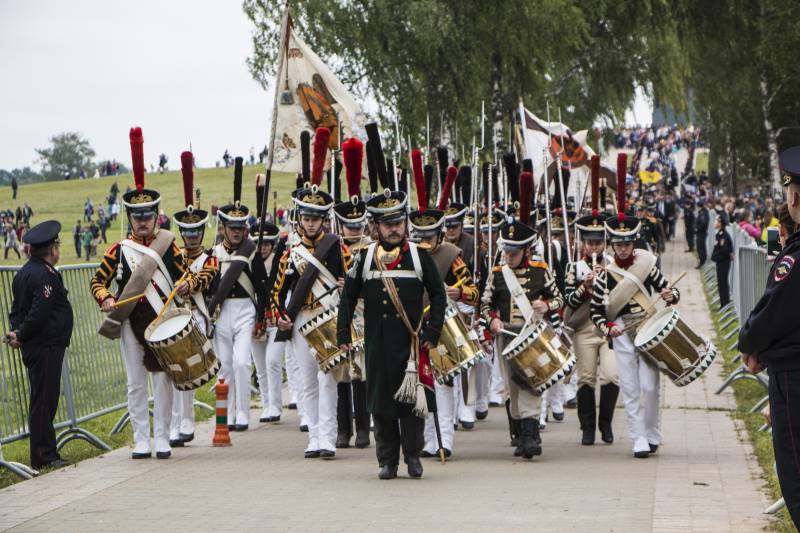 Actually, we did the same thing, after a short dupe with a bus. We were immediately told that by bus there, and from there - as soon as all the people left the parade ground.

13-00
When we arrived at the theater, we realized that we, too, are infantry. According to our estimates, several thousand people came to look at the reconstruction of the battle. If they say that there were about 10 thousands or even more, we will not be surprised and believe. There were a lot of people. 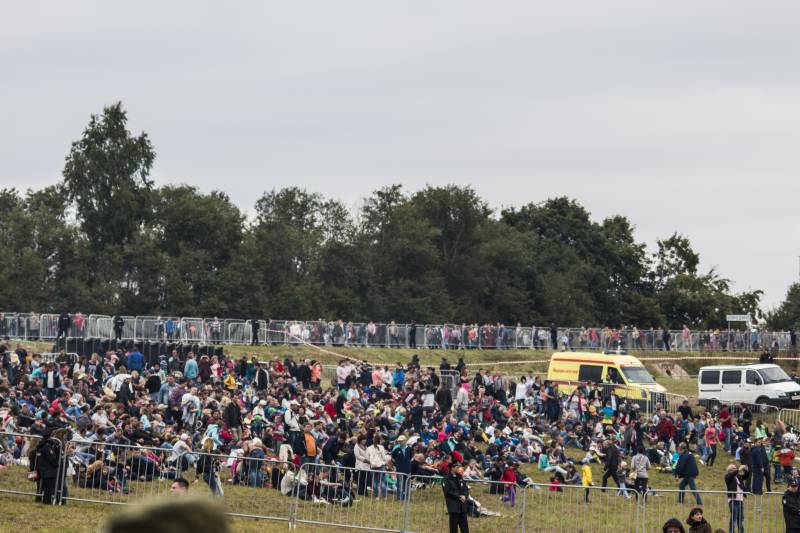 The fact that you can not use the copters, we were notified in advance. In general, some fashionable nonsense went, with the prohibitions.

You can only shoot from two points: below the field and above, from improvised (enclosed sections of the hill) stands. We decide to shoot at the bottom, because we have only 1 equipment, camera and camera. Actually, and not particularly regretted.

And here for us a new surprise. It turns out that reconstructions like this one are very different from those we are used to in World War II. 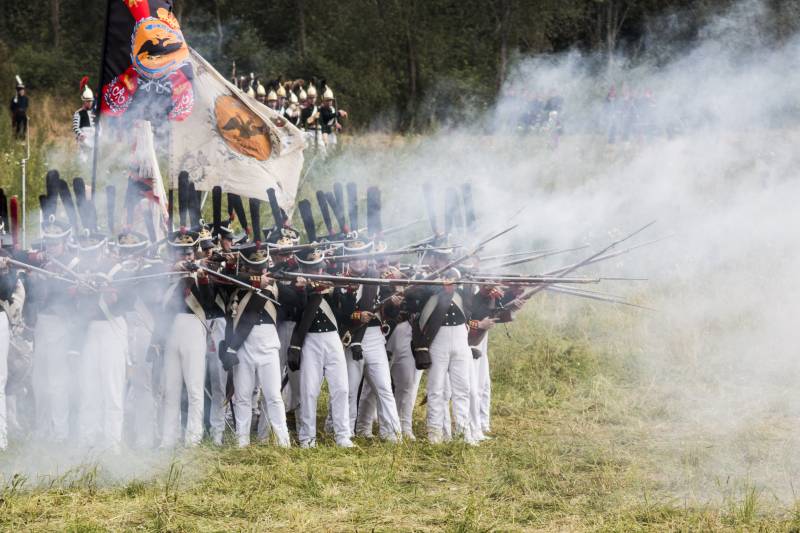 Here people do not "die." Columns are marching, rebuilding in a square, artillery firing, cavalry attacking the enemy, but no falling people. 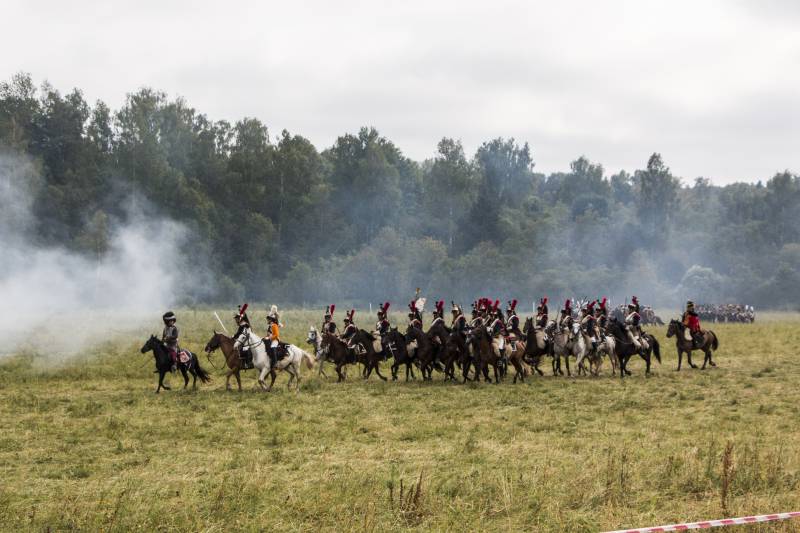 Cavalry in its attacks does not fit in the focus to the attacked. Here, obviously, the safety rules. And the elementary thing is manure. Horses, they are ... Do not choose places where to go and where to crap. Because no one falls to the ground. In order not to impede the life of themselves and horses. 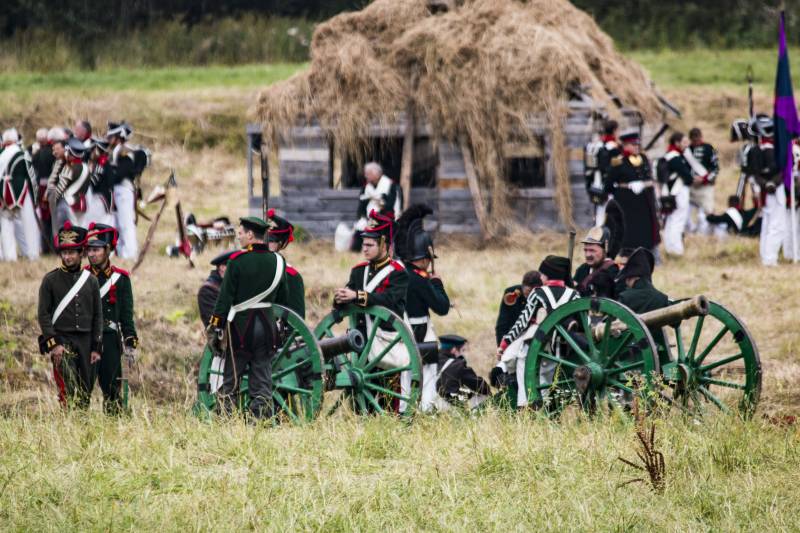 It turns out a tactical picture of the battle. Colorful. Elements dashing attack cavalry, logging, are present. The infantry shoots volleys and runaway fire. Everything, in principle, like 200 years ago. But - without the dotted earth tel. Beautiful, to be honest.

Loved the cavalry ownership of their horses. It was evident that they can. And the number also impressed. The organizers said that 1200 people took part in the action. We will not dispute. The cavalrymen were 100-150. The rest are infantry and artillery.

Accompanying the action was also on top. Of course, it was very difficult to switch, but understanding was the place to be. For us, beginners - very impressed. But unequivocally, we must tighten our knowledge of history in order to simply understand who and where.

A very colorful sight. And it is not 10-20 minutes, as the reconstruction of the Great Patriotic War. Actually one hour and twenty minutes. And, most interestingly, after the announcer announced the end of the action, the participants continued to fight. While there was gunpowder and enthusiasm.

Then, of course, all the participants approached in a single line for applause. Deserved, I must say. It is unlikely that there was at least one person on the field who did not like this performance. 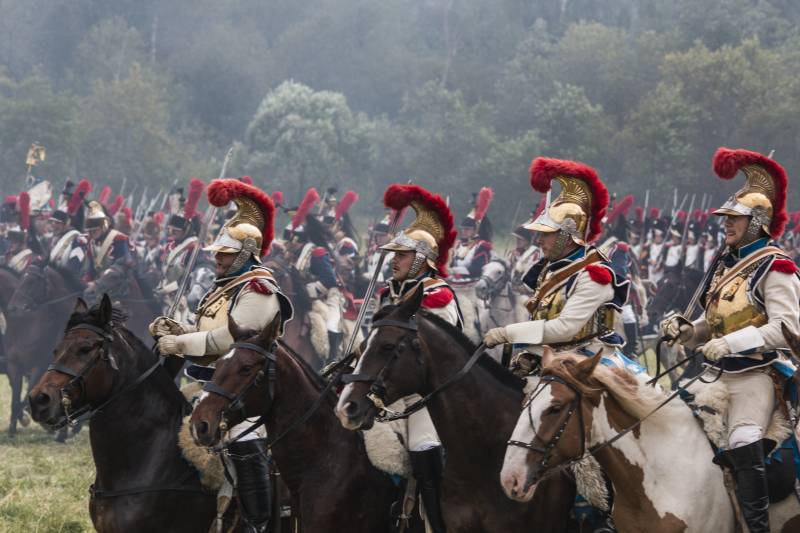 The French from the 5 regiment cuirassier. Real french.

Unity? Yes, definitely. All were participants of one performance. Assault Shevardinskih fortifications. Many thanks to all for the beautiful action.

16-00
The end. Thanks to everybody, you're free. We were still rewarded with coupons for a free lunch, but since no one knew where it would take place, we decided to throw it quickly. While not faded impressions of what he saw.

Our experience allowed us to be among the first, which we were very, very pleased. Marsh cast was performed in the best traditions. 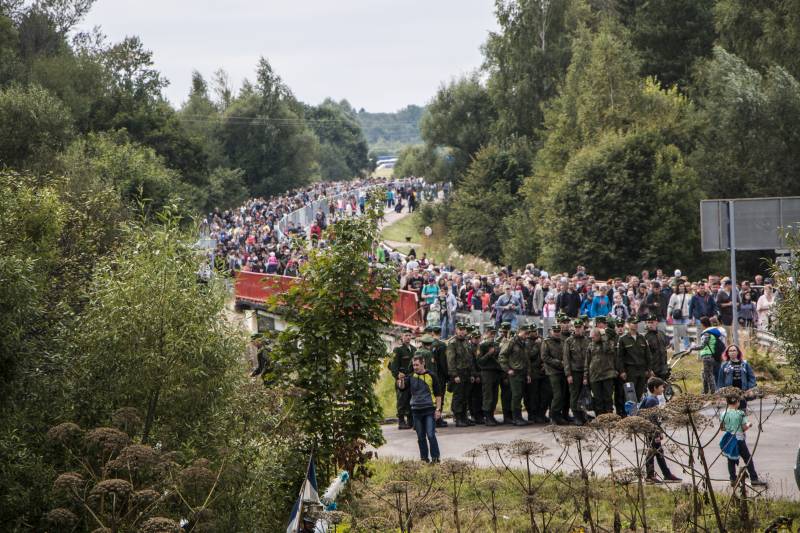 - somewhat excessive monetization of the event.
- lack of awareness of the events.
- long pedestrian crossings.
- interactivity shook for a long time.

If in general - we recommend this festival to visit. Colorful and interesting, and “shoals” in the organization can be forgiven and understood.


P.S. This is not a report on the reconstruction itself, beautiful pictures of what is happening on the field will be in the following material.