On the "Pella" launched another "Raptor"

4 September 2017
48
At the shipyard "Pella" launched another boat of the project 03160 "Raptor". As reported on Monday, September 4, the official representative of the Russian Navy, Captain I Rank Igor Dygalo. According to him, it is planned that after testing the boat will be transferred to the Naval the fleet and will become part of the forces of the Caspian flotilla.

At the St. Petersburg shipbuilding enterprise "Pella" the next patrol boat of the 03160 "Raptor" project was launched
- said in a statement 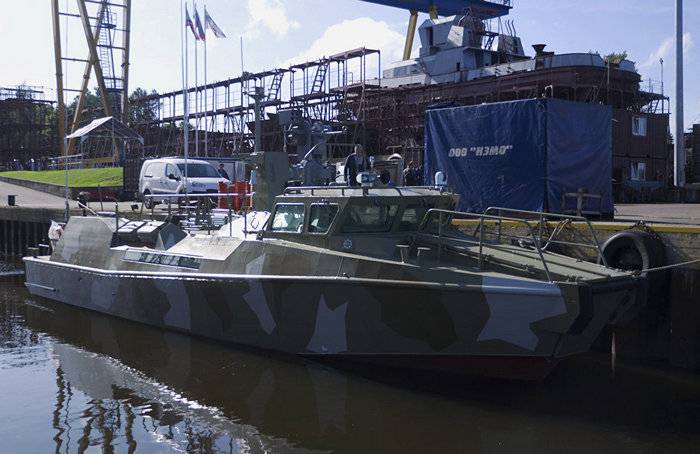 The Raptor patrol boat series is being built by order of the Navy for patrol service in sea areas. The Raptor boats are distinguished by high maneuverability and effective armament for their class. The boat of the 03160 project is designed to perform the delivery of military personnel at daylight and at night - no less than 20 people, carrying patrol service, intercepting and retaining small targets, search and rescue operations.

The navigation area of ​​the boat of the 03160 project is the coastal zone of the seas, straits, estuaries in the ice-free navigation period in the daylight and at night with the distance from the basing point - 100 miles. "Raptor" is capable of speeds up to 50 nodes, its crew is 3 person, draft 0,9 meter. It is equipped with windows with bullet-proof glass 39 mm thick, as well as weapons - a remote-controlled complex with a gyro-stabilized optical-electronic module (GOEM) of 14,5 mm caliber; has a target detection range 3000 m; sighting range of shooting - 2000 m; and two 6P41 "Pecheneg" machine guns of 7,62 mm caliber on swivel installations, reports RIA News.

We are in Yandex Zen
The eighth Raptor transferred to the Russian fleet
Ships of the Caspian Flotilla in Volgograd
48 comments
Information
Dear reader, to leave comments on the publication, you must to register.