5 September 2017
99
At present, very interesting phenomena are observed in the market of commercial launches of spacecraft. One of the relatively young private commercial organizations not only brought its rocket and space technology to operation, but also shows the most serious results. Its share in the field of commercial launches is constantly increasing, while the recognized market leaders have to make room. To cope with the existing competition and prevent the loss of their share of launches, old and experienced organizations will have to take appropriate measures.


The main threat to the commercial performance of the old market participants in recent years has become the American private company SpaceX. With certain financial, organizational and technological support, this organization was able to develop new models of rocket and space technology and then bring it to the practical use stage. The introduction of non-standard solutions and profitable commercial proposals, complemented by an aggressive advertising campaign, led to the results.

Since the beginning of 2017, the SpaceX digging company has performed 12 launches of Falcon 9 launch vehicles with a payload on board. Until the end of the year it is planned to launch more 11 missiles of this type. Three launches this year were held in the interests of NASA. Another rocket carried a military payload. Customers for the remaining launches were various commercial organizations from different countries. The situation is similar with the upcoming launches, which will mainly be carried out in the interests of private companies in various industries. 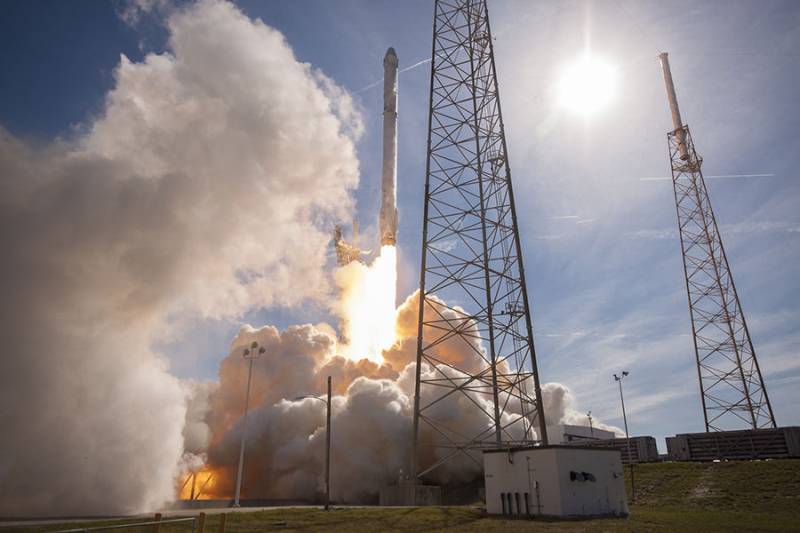 For comparison, the Russian space industry has so far performed 11 launches, including 2 from a space launch site in French Guiana. 11 starts are scheduled for autumn and winter. This year, Russian launch vehicles launched a military device, an 3 spacecraft for the International Space Station and one scientific payload into orbit. Two more launches were performed with the participation of the Arianespace organization. Only one launch was carried out by Russia on the order of a commercial organization.

Not so long ago, SpaceX announced its plans for the near future. Its experts believe that, by the end of 2017, the Falcon 9 missiles will be able to occupy the 45% of the international market for commercial launches. The European Space Agency in this analysis is given 40%, Russia - only 15%. Next year, 2018, American merchants intend to increase their share in this market to 60-65%. European launches will not exceed 30% of the total, Russian - up to 10%.

No less interesting are the financial indicators of the rocket and space industry. So, last year, world companies in total earned billion dollars from commercial launches of 2,5. The gain in comparison with the previous year was 300 million. American businesses earned $ 1,185 billion on such services, while European enterprises earned 1,152 billion. The commercial launches of rockets brought Russia only 130 million US dollars. In this case, only one private SpaceX earned about three times more than the entire Russian space industry.

It should be noted that the rocket and space sphere is not limited to commercial launches alone. The payload of military, scientific or other non-commercial purposes still has a large share in the overall structure of launches, and therefore in a certain way affects the rocket and space sphere. However, we should not forget the fact that commercial launches, unlike “state” ones, allow companies and countries to earn serious money on advanced technologies.

Thus, in the existing situation, recognized market leaders need to take certain measures aimed at maintaining a favorable situation and obtaining the maximum possible market share. At the same time, it is necessary to take into account the recent successes of SpaceX merchants who claim leadership positions. Taking into account the peculiarities of this company, as well as the current market trends, it is possible to imagine which projects should be developed and which areas should be given special attention.

As events of recent years show, commercial spacecraft operators are interested in middle-class launch vehicles capable of bringing low-Earth orbit up to 5-10 t. At the same time, the launch cost is an important factor influencing the choice of contractor. American specialists involved in the implementation of ideas for the return of individual units have already managed to obtain certain results in this area, which has become a clear competitive advantage.

Over the next few years, Russia will have to use several types of launch vehicles. This technique has already managed to show itself in a good way, and therefore can remain in operation. Nevertheless, the events of recent years may show that the existing Russian missiles are far from fully meeting the requirements of potential customers, and there is a need to create new samples. 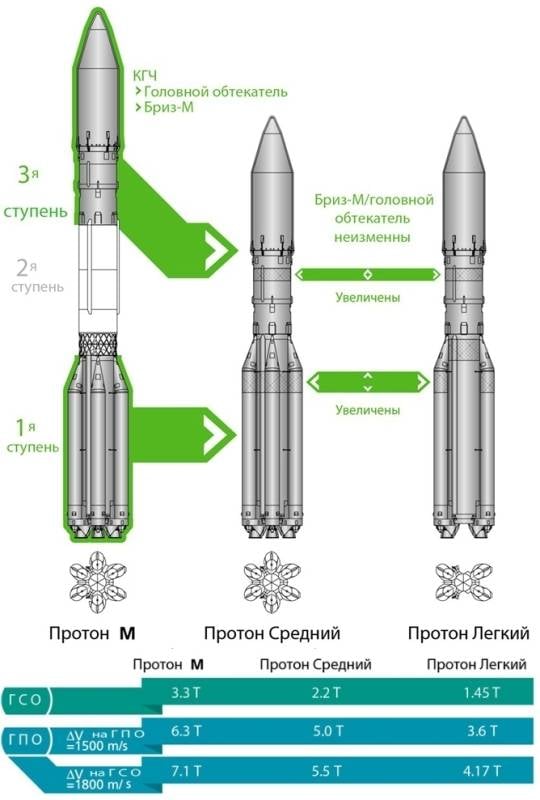 The principle of building missiles Proton Medium and Proton Light

Russian organizations are currently developing several projects of promising launch vehicles suitable for solving several basic tasks. Thanks to their appearance, Russia will be able not only to ensure the existence of a group of spacecraft or to conduct various scientific programs, but also to count on increasing its share of the global market for commercial launches.

Back in 2015, the leaders of the rocket and space industry announced the launch of the Soyuz-5 project, which should result in the emergence of a promising medium launch vehicle. In the future, the main Russian enterprises were busy forming the overall appearance of the rocket and the technical specifications for it. At the same time, approaches to the implementation of the project were determined with a certain participation of foreign countries, and the approximate dates for the completion of the main stages of the project were announced.

Just a couple of weeks ago, it became known that the project "Soyuz-5" passed into the stage of preliminary design. In the course of these works, it is planned to work out a variant of the rocket equipped with one RD-171М engine at the first stage and two RD-0124 engines at the second. It was reported that the draft design will be ready in November of this year. Apparently, after this, the industry will be able to proceed with the full-fledged design and preparation of all the necessary documentation.

According to existing plans, the modernization of one of the launches will begin at the very beginning of the next decade at the Baikonur cosmodrome, after which it will be able to operate the Soyuz-5 missiles. The first start will take place no earlier than 2022-23's. One of the first payloads for a promising rocket will be the Federation spacecraft. Not earlier than the mid-twenties, the rocket will be put into full operation. It can be launched both from Baikonur and from the East. Having received such a launch vehicle, the Russian specialists will be able to send up to 15-17 tons of cargo of one sort or another into low earth orbit.

Just over a year ago, the leadership of the State Space Research and Production Center (GKNPTs) them. Mv Khrunicheva spoke about plans to create promising launch vehicles, originally intended for commercial operation. New domestic missiles will have to compete with foreign counterparts in the launch of five-ton geostationary satellites. It is noteworthy that, commenting on new projects, the leaders of the Center were directly talking about creating an answer to the development of SpaceX.

GKNPTs them. Mv Khrunicheva and the company International Launch Services talked about the development of two projects at once, designated as “Proton rocket variations”. These developments have received the working names Proton Medium (“Proton” Medium ”) and Proton Light (“ Proton ”Light”). As it is clear from the names of the projects, their goal is the creators of the light and middle class, capable of solving problems in different niches of the market. To simplify and reduce the cost of the project, it was proposed to use the most widely used components and assemblies of the Proton-M production missiles currently in use.

According to the 2016 of the year, “Proton” Medium ”was supposed to be a basic“ Proton-M ”without a regular second stage. Own two steps should be complemented by the Briz-M upper stage. As part of the “light” project, it was proposed to rework the design of the serial first stage. Instead of the six engines installed in the side units of the case, you should use only four, which will lead to a corresponding change in the basic characteristics. According to calculations, the middle class rocket will be able to send a payload of up to 5,5 t of the payload to the geostationary orbit, and up to 4,17 t of the lightweight class. 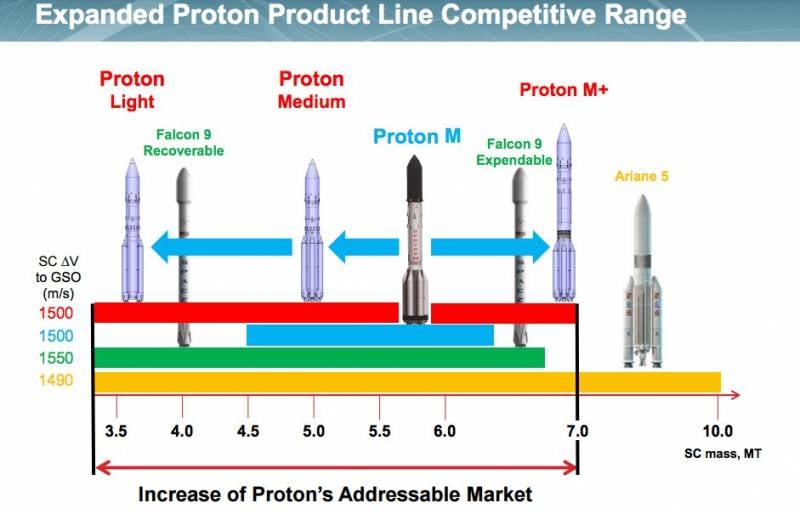 Comparison of the Proton family of missiles with foreign counterparts

A year ago it was reported that the first Proton Medium rocket will be able to go to space for the first time already in 2018. It was supposed to be launched from the site №24 of the Baikonur Cosmodrome. The first launch of Proton Light was supposed to be done already in 2019. Such an early realization of a bold project should have contributed to the widest use of ready-made components and assemblies. Being a rebuilt Proton-M, the new “rocket variations” did not need a significant number of specially designed parts. The development of the required new devices, in turn, should not take a lot of time.

According to the latest reports received at the end of August, at the moment, an average version of the updated Proton has been chosen for implementation. At the same time, the project implementation dates were changed. So, the first flight of the Proton Medium was moved to the beginning of the 2019 of the year. The timeline for the start of assembly and launches of the “light” launch vehicle is not yet specified. In the framework of the new project Center. Khrunicheva plans to use the so-called principle. dispatch. Thus, a specific person will be responsible for internal and external cooperation, as well as for the technological chain.

Modernization projects of the Proton-M rocket are still at the development stage and the new equipment is not yet ready for operation. However, their first commercial successes are already known. International Launch Services, which will organize the operation of Proton Light and Proton Medium rockets, announced it has received an order from Eutelsat Communications. One of the largest satellite communications operators intends to put its new device into orbit with the help of a promising Russian rocket.

Over the past few years, very interesting trends have been observed on the international market for commercial launches of spacecraft. Not so long ago, private development companies simply were not taken seriously, but now the situation has changed completely. The merchants not only managed to bring new models of equipment to the market, but also to show quite remarkable results. For several years, the most successful company, using certain assistance from third parties, has managed to win a significant part of the market.

How long this redistribution of the market will last, and what results will it lead to - it’s too early to say. However, it is already clear that the recognized leaders of the industry, whose positions are threatened by the activities of new participants, will take all the necessary steps and try to preserve the most advantageous situation for themselves. This means that in the very near future new information about the plans of the rocket and space industry and its new developments of various kinds may be made public.

Ctrl Enter
Noticed a mistake Highlight text and press. Ctrl + Enter
We are
ARMY-2016. Cluster VCS. Part of 2. Space is space!State and private space: Russia's competitive opportunities
99 comments
Information
Dear reader, to leave comments on the publication, you must to register.