Who treats the Bible like that ... About the new "quirks" of the American administration

5 September 2017
80
It turns out that the longer President Trump is in power, the more I become a hawk. Is this my degradation or surrounding reality forcing? Washington's hysteria and some ridiculous "assaults" on Russian diplomats simply scream about the weakness and inability of the American administration to solve at least some serious questions. 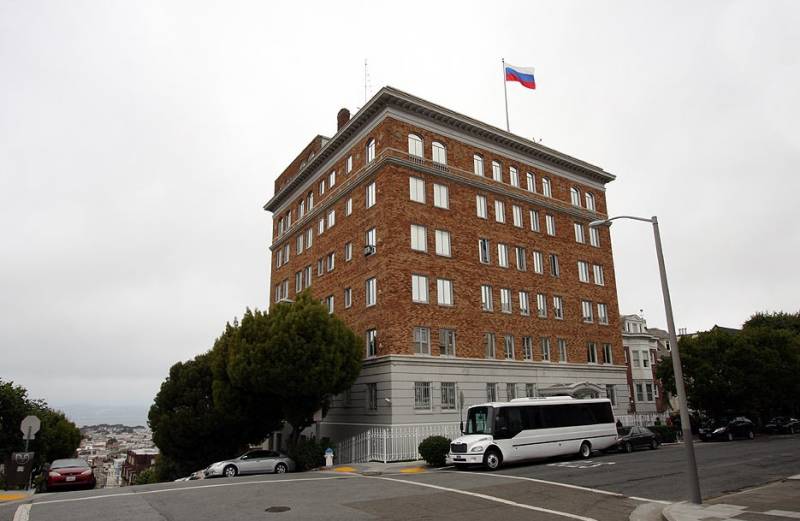 These people violate all laws and treaties. They spit on international norms ... And at the same time they demand the fulfillment of these very norms and other "rights" from others. And why on earth would you allow it? If a dog bites me, then I absolutely do not intend to engage in a discussion with it. Easier and much more effective will be a kick! Or, if you kick laziness, stick, picked up next.

What is happening in the world today, I have not for nothing called the American hysteria. Countries that recently not only were afraid to open their mouths at the sight of the American flag, but generally speak about themselves as independent states, are now openly “sending” American brothers to ... Well, somewhere far away. I am not strong in foreign languages ​​to translate slang words ...

I wrote about the DPRK. He wrote about what is happening in this region and how. Readers will remember the main message of that article. Kim Jong-un wanted to spit with a high bell tower, no, pagodas, to all the warnings of the United States. He is well aware that in the conditions when the guys from Washington "have ceased to be friends with the head," the only chance to survive and preserve the state lies in a strong army, in the presence of weapons of mass destruction, including nuclear weapons.

No matter how I feel about the regime in the DPRK, I can’t help but admit that the Koreans accomplished the feat by the fact that under the conditions of sanctions and other intrigues of the “powerful people of this world” they were able to create not only missiles, but also nuclear warheads to them. From my point of view, it deserves a lot of respect. And about the regime ... So what is the better regime in Pakistan? And there are plenty of such examples.

But these are all known facts. And others? Other countries were able to just like the DPRK? Think no one else dared? And Venezuela? How much dirt spilled from the US State Department at Maduro? How many times have we heard of the "last warning" of the US president? And how many times did President Maduro openly send the American president to the address I mentioned above! The US Army has even its jeeps refuel fuel for the invasion. So what? Another rally, the next ridicule of the Venezuelan president and ... Until we invade ...

And why? Maduro is so strong? Is Venezuela a powerful military power? Ha. Everything is easier. There, the "Asian" interests. Asians are us and the Chinese. And we will defend our interests! That "growling behind the bars", like tigers in a zoo, American jeeps ...

Okay, Maduro. And Duterte? I always thought Spanish blood was hot. But it turned out that the Philippine is hotter. Maduro, the lessons must be taken from Duterte! How beautiful and insulting to "bestow" Americans with their faqs. Interspersed with their own popular expressions from among the particularly "acute". And what about Trump? What is omnipotent America? And America "fell ill" hearing loss and blindness. Does not see and does not hear ...

Few? Then another well-known to us President Assad! Remember the main slogan, which last year sounded every day from the mouth of the Americans, and the Europeans (they didn’t have pinched the tail then)? Assad must go and then ... So what? Gone? Well, yes, "left." I sent to this very "left" almost everyone who then shouted after the Yankees. How he did it is not particularly important. And with whose help. But what has saved the country and the people is important.

I grew up in a Siberian city in Soviet times. He grew up, one might say, on the street. We then all grew on the street. Parents worked, and after school we were provided with this very street. Good or bad, I do not know. But I would not want another childhood. It was the street that taught the simple truth. Beat is not weak. Beat panties. Even if several opponents "squeezed you" - attack! You'll get your slap in the face anyway. But the respect from the attackers you will have for many years. And, if this happens, it is these “enemies” of yours that will stand next to you when necessary. Stand shoulder to shoulder.

I am annoyed today with the conversations that are conducted in our media about the response to the American hysteria. We should not contribute to the slide into war ... We need to understand that in the US now there is "internal political struggle" ... Russia is inferior to the United States and NATO in the number of weapons and in the economy, therefore we need to sit and not rock the boat ... We are responsible for the planet and should not allow a nuclear war ...

I will not now justify my position with "smart words." Moreover, I think that this information is in abundance today. I will remember youth again. One against the "crowd"? Beat the leader! Bey so as not to rise. Bay so that the blood in the face. And immediately to the next ... Then you have a chance that the instinct of self-preservation will work for the rest. "Well, him, this idiot" ...

We have long been harnessed. Oh, this is our feature. Too lazy to hit back. Well, "hit us" last December "on the cheek." We are Christians, we read the Bible. What I personally doubt. I tried. Difficult to understand. And I think modern translations are a surrogate. Probably not "ripe" for such books. But, about "hit on the right cheek, turn left ..." everyone heard.

I will not quote the Bible for the reason that I have not read it completely ... But I will tell you a parable. Just about this topic. For the accuracy of the words do not answer, but in fact. So, a modern young man comes to the temple, who is educated from Wikipedia and ... She comes up to the priest and hits him on the cheek. "So what? Substitute the left ...". The priest, a former boxer, with one blow sends the "connoisseur of the Bible" into the knockout. "What measure you measure, so it will be measured to you." Granny parishioners ask the deacon: "What is it?" To which he thoughtfully replies: "The Gospel is interpreted" ...

We are told that we must prevent ..., understand ..., contribute ..., know our place in the economic and military situation ... And to whom should we? World community? Humanity? Cosmos? Yourself? To whom should we, if no one took anything?

Why has Trump repeatedly said everywhere about the readiness to use nuclear weapon against North Korea, and the same words from the mouth of the UN cause the wrath of "the whole democratic world"? Why is NATO at our borders, and we are the aggressors? I think that's enough already. Does Trump want a war with Korea? Let him risk his health. Does NATO, through its former brothers, want to destabilize our situation? Go ahead and with the song.

I will return to where I started the article. To spitting in the direction of the United States. Great we "wipe", but for some reason Iran does not. So what? Again sanctions and threats. Pakistan for some reason not. China for some reason not. Moreover, China openly declared yesterday that the DPRK would be defended in the event of a US attack. Open! Without "let's talk" and "express concern." Hit the Koreans, get from the Chinese. And the US is silent!

The United States understands a single language. Not English! This language is the language of power. Exactly when American soldiers and officers have a real chance to "war" with an equal opponent, they have no desire to fight at all. Exactly when someone "shows teeth", the myth of the omnipotence of the United States quickly breaks.

Remember the capture of American hostages in Iran? In November 1979 of the year? How is it over? Vaunted American special forces obgadilsya in full. The Eagle Claw cost 8 paratroopers life. And the hostages ... redeemed! For the big money! 444 of the day of shame for the USA.

Today, most Russians, it seems to me, will understand our power, if it responds not mirror, but asymmetrically. To complete. And it is not necessary to give a damn what the "international community" will say. Spit and grind soldier's berets. Why do we need a community that notices only what the Americans point out to it? Can this community be taken seriously?

It is silent when Trump talks about a nuclear strike on the DPRK. And what, the life of a Korean is less valuable than the life of an American? It is silent when fascists are marching in some "former" countries and notices a poor boy, whom his father kicked his ass for absenteeism at school. It justifies the destruction of states and the destruction of entire ethnic groups in some territories and does not recognize the exact same actions on others. Why do we need such a community?

Some will now remind me of the League of Nations. The author pushes the world to a big war! Oh. I am not pushing the world into this pit. I just see that the world does not want to stop. And I understand that it can be stopped today with much less blood than tomorrow. Our blood. Chinese blood. The blood of other nations ... And about the League of Nations. Wait a few days, and you will see very interesting proposals for reforming the UN. Naturally from the US ... At the upcoming session of the UN General Assembly.

I'd like to stand next to the Iranians and spit relish in the "impudent face" of the United States. After all, once our fathers were able to do it. What about us? A gut for now?