4 September 2017
21
The city of Akerbat was freed from the IG grouping (ISIS, banned in the Russian Federation), the Russian Aerospace Forces caused considerable damage to terrorists in the west of Deir ez-Zor, reports FAN with reference to Syrian sources. 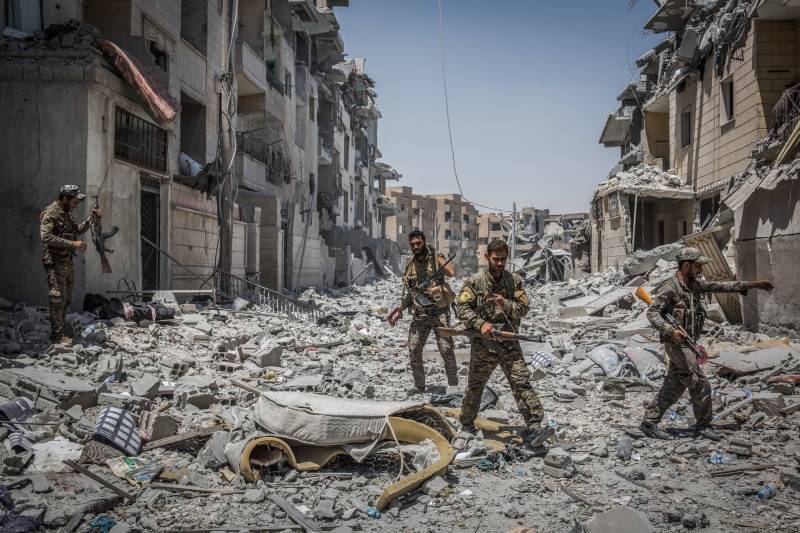 After rocket attacks, the SAR government forces attempted an offensive against militant positions in Ain-Tarma (Damascus), but the attack was repelled. In addition, the Syrian troops lost the tank T-72 and BMP. Armed clashes in the area of ​​Harasta and Zamalka were also noted.

An unexpected attack by IG radicals occurred near the border with Iraq in the southeast of Homs. The militants who were in an ambush captured and shot two fighters of the Popular Mobilization Force. In the southwestern part of the region, units of the National Defense Forces (NDF) and units of the Syrian Arab Army advanced slightly to the east and took a number of strategic positions of the Syrian Free Army (FSA) militants who retreated to the At-Tanf border crossing.

The Russian Aerospace Forces continued to support the units of the Syrian Arab Army (SAA) and its allies advancing in the province of Deir ez-Zor throughout the day. As a result of several sorties, the Islamists lost two tanks, two stores with ammunition, as well as several military pickups with weapons. After that, the militia units on the side of the SAA managed to occupy the village of Kobajip, as well as two small villages near it. On the border between Deir ez-Zor and the neighboring province of Homs, Western Alliance forces are still blocking a convoy of IS fighters evacuating from the Western Kalamun Mountains to the city of Abu Kemal. Buses with radicals are under the gun aviation Western coalition.

Thanks to the support of the Russian Aerospace Forces, the Syrian government’s army managed to break through to Deir ez-Zor and lift the siege of the city, which lasted three years. Ninth tanks and other equipment of the Syrian army entered the territory of the 137 artillery brigade. In addition, with the support of the Russian Aerospace Forces, government troops liberated an oil field 15 kilometers from the city of Deir ez-Zor. After the breakthrough of the siege, the militants of the "Islamic State" began to storm the areas controlled by the army of the Syrian government. Militants are storming the areas of Kusur, Jaradi and Rashidiya.

In the past 24 hours, fighting continued between the Kurds and the IS forces in Rakka. As a result of clashes in the Al-Haramiah region in the south of the city, 18 fighters of Kurdish units were killed. Nevertheless, the Kurds managed to completely capture the quarter of Al-Murur.

Militants of the IG, surrounded in the Akerbat area, began to resort to extreme measures in the fight against the elite squad “ISIS Hunters”. The terrorists sent several suicide bombers at once to the strongholds of the Syrian army. The explosions killed at least 13 military personnel. In the second half of the day, the forces of the 4 Division of the CAA, as well as part of the Kalamuna Shield Brigade, joined the fighters of the special detachment. After that, the government forces, with the support of the Russian Aerospace Forces, again occupied Akerbat. However, battles are still ongoing in the vicinity of the city.