As I was preparing for war with Ukraine. Notes in the breaks of performances of teams at the festival of fireworks

4 September 2017
28
Readers are probably already used to the fact that most of my more or less interesting thoughts are born far from the “sofa”. I do not know, maybe the furniture acts on me like this, and maybe, on the contrary, the lack of furniture and the conditions “close to the fighting ones”. Sometimes I even wonder if I should leave the house at all. Sit like a snail in your own shell, and give out "smart" thoughts. So that no one scolds. So that no one praises. So that no one is offended. Only then can I hear the voice from the other shoulder. "And why the hell do you even write? Have an idea? Share with people and get answers to your own questions. And no thoughts, do not waste the time of readers! ..".


It so happened that on the night from Friday to Saturday I decided to go to the international festival of fireworks, which is becoming popular in our city. The spectacle, who has ever seen this action, fascinating. Lights in the night sky under classical music ... Lights "pop-up", lights "falling", lights "sizzling", lights "ripples" ... Simple "breaks" are not even perceived by the audience ... Primitive ...

But there is one in this spectacle, rather inconvenient for a modern viewer who is used to “speed,” a drawback. Between the performances of teams from different countries, some time must pass, which is necessary, probably, for the preparation of charges ... The organizers are trying to “score” this time with performances of artists, contests and other “entertaining”. But we came to watch the fireworks.

And modern mobile communications provide an opportunity to do what you are interested in in these gaps. Naturally, I sat on the bollard on drying hay (local residents for cows mowed down) and "climbed" on the Internet. Well, "climbed into the woof ...". In short, I got one fairly knowledgeable Ukrainian colleague at a press conference in Kiev. Valentin Badrak, Director of the Center for Army, Conversion and Disarmament Studies, spoke about ... my readiness to start World War III! .. 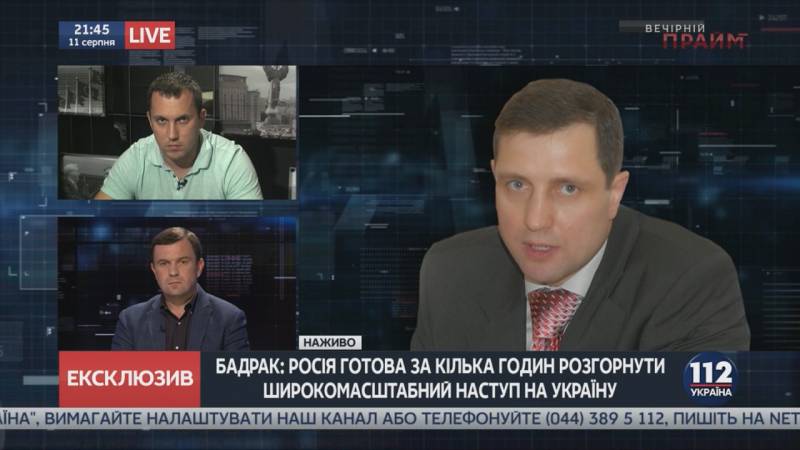 “Relations between the Russian Federation and the United States have greatly deteriorated.” In particular, the symbolic support of Ukraine and the arrival of the head of the Pentagon and representatives of other NATO countries caused furious hysteria in Russia. ”

Strange somehow. I looked around. "Cubs" run, they eat all kinds of fruits and berries, young people embrace, they kind of warm each other in the twilight, mothers spread something on the tables, poured ... Won men smoke solidly on the sidelines (somehow we came to the conclusion that smoking "on the spot" was not comme il faut ...). And no one hysteria about Russian-American relations. People are just waiting for the next show. What's the matter?

I listen further. Well done Badrak. answered my, not yet asked, question:

"In general, the Western world is satisfied with the situation when Ukraine is a buffer zone between the West and Russia itself." "In Europe, they understand this, and especially the Europeans are satisfied with it."

So that's the thing! Europeans are vilely confronting Russia with the United States and Ukraine. And everything suits them completely. Here it is cunning of Europe. And we, Russians, led this way. We have a tantrum. Not where I am at this conference, but in general. We in Russia in general, like that in Badrak, right.

I repent, a new performance has begun. More interesting than Badrak. That's why I put the conference on the recording and enjoyed the spectacle. And people followed. An interesting reaction. No one is afraid of breaks and "broads". On the contrary, clap their hands and shout “Hurray!”. People do not know and, most importantly, do not want to know how warheads explode! People do not want to be afraid. People want everyone not to be afraid! We're celebrating. And we will be happy to share this holiday with everyone!

The next break gave me the answer to the main question. Why do we need a war? Have you ever asked this question? I honestly do not. For some reason, he was always sure that no one needs war. Probably because I understand the essence of this filth. I understand that the soldier has no second life. Not a computer game. War is the last solution. When all the measures have been tried and all the words are repeatedly spoken.

“The presidential elections in Russia are coming, and in March 2018, Putin needs some victories, we need certain things that he can present to his society in order to claim another victory and continue his“ reign ”.”

Strange. Someone in Russia doubts Putin’s victory in the next election? Does someone see a real opponent for the current president? Alas, today there is no more popular politician in Russia. Good or bad, I do not know. Probably bad. We are not forever ... Then what is the expert about? As always about his? About Ukrainian?

I am more and more amazed at what is happening today in Ukraine. I’m not talking about a "hybrid war", not about "the machinations of the FSB," not about "separatists and terrorists." I mean the understanding of our country. Our people. This is despite the fact that in the majority of Ukrainian families today there are relatives who work in Russia. See us "in the house coat". Without all these stamps of television and other media. And they see that the popularity of our president does not fall. Even though there are a lot of "shoals" inside the country.

And then the press conference went the way, quite expected and quite predictable. Sentry, Ukraine is not ready for a large-scale war! Our military needs to be reformed. We need western weapon... mortal boredom. The main thing that Russia knows about (about the state of the Armed Forces of Ukraine) is prepared!

"According to our data, those units that are on the first line ... in these structures, in these units, the level of equipment of military equipment has reached 58% as of 2016 year. As of the end of 2017, it was planned to achieve 62% rearmament system, "this is a very serious challenge for Ukraine."

Do you know what our main task today is? Do not believe it, especially after the latest reports on the construction of the Kerch bridge.

"For Russia, the issue of breaking through the land corridor to the Crimea remains relevant. Any development of military success, if it takes place, will also be a formal achievement for the Kremlin." "Therefore, the probability of a military operation before the election is quite high."

The next performance was from the series of the beyond ... We watched the fiery extravaganza and admired the skill of the pyrotechnics. Curb this element, make it be beautiful, make it be a peaceful and good lot of the masters. Crack artists. More precisely artists! And what about Badrak?

Again, gray and primitive. The rhetoric has not changed for three years. Probably, for the perception of the Ukrainians, this is enough. Dupe system works.

"Already today we see very serious work, the revitalization of the work of the pro-Russian movements, Russian agents. And in fact, the center of gravity of the information work has shifted to the political plane." "Russia reserves the opportunity to use force measures, including terrorist acts, to influence society and provoke a distrust of power."

I watched the last part of the speech already in the car. When warmed up the engine. And she pleased me. It is pleased. His helplessness. Just a fabulous conclusion after the whole press conference ...

"In fact, we are currently stating the completion of Russia’s preparations for a major war. Whether it will or will not be - this is a different matter."

I often write that for me a lot in this world becomes incomprehensible. Much gets just wild. I, if you follow the logic of Badrak, did not watch the holiday, I was preparing for war. And I cooked children. To the explosions were not afraid. And mommy cooked them. We were all preparing for war ...

To what degree do you need to bring people to such experts as authorities for them? So that such arguments were perceived by people. I, and I do not hide it, have long been "exactly" what is happening in Ukraine. For me, Ukraine today "narrowed" to the Donbass. The fate of these people is not indifferent to me. The fate of their states is not indifferent to me. The rest of the territory of the former USSR is an ordinary “foreign country” for me.

And about the Director of the Center for Army Studies, Conversion and Disarmament Valentin Badrak, I had one single thought. He would change the letters in the names. The third with the fourth. Mostly. So that you can immediately see in what condition the brain of this expert ... And who do the people consider as independent are its leaders, if they give an opportunity to speak to such experts ...