2 September 2017
39
22 December 2000 to revive and develop the Russian military traditions, increase the prestige of military service, and also in connection with the 300 anniversary of the Russian Guard, by a decree of President Vladimir Vladimirovich Putin, a new memorable date was set - Russian Guard Day. September 2 was chosen as the festive date. In addition to all the above, this memorable day was established in recognition of the merits of military specialists in solving the tasks of ensuring the defense and security of the country.


Guard (from the Italian word guardia - guard, security) traditionally called the privileged, selective, trained and equipped part of the troops better than others. In many countries, the guard was the core of the army. Often these were well-armed detachments that were directly under the monarch and sometimes also performed the functions of his personal guard. At the beginning of the 15th century, the guard was organized in France, later becoming widespread in many European countries.

The appearance of guards in Russia is inextricably linked with the name of Peter I. The so-called amicable troops of Peter the Great, who were trained in the “foreign system” (modeled on the Western European armies in terms of training and organization), became the forerunners of the Russian Guard. Sergey Leontyevich Bukhvostova is considered the first Russian guard, who was the first in 1683 to enroll in amusing regiments. In the 1692 year, they were consolidated into the 3 Moscow Elective Regiment under the command of A. M. Golovin (already divided into two regiments: Preobrazhensky and Semenovsky). In 1700, these two regiments began to be called Life Guards. Already in the battle of Narva in 1700, both guards regiments were able to distinguish themselves. For three hours they, despite the general chaos and panic, as well as the wounding or surrender to the Swedes of all the staff officers of the Russian army, with unprecedented resilience and courage restrained the onslaught of the enemy, which ultimately saved the army from complete defeat and destruction. In a sign that in the battle of Narva, the guards fought "knee-deep in blood", Peter I ordered to replace their stockings with green to red. 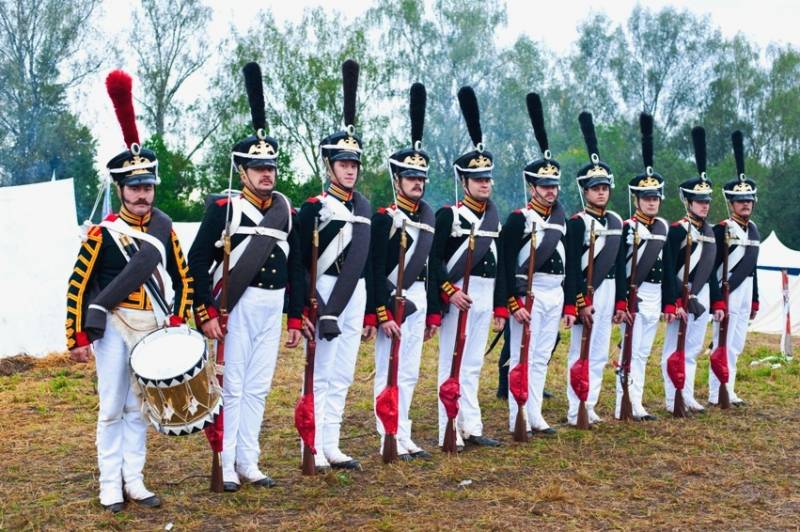 Guardsmen of the Semenov regiment, 1812 year
Guards Preobrazhensky and Semenovsky regiments existed in the Russian army until 1917, after the revolution and the collapse of the Russian Empire, they were abolished. The revival of these regiments took place already in the XXI century. 12 December 2012 of the Year in his Address to the Federal Assembly, Russian President Vladimir Putin stated the need to revive the Preobrazhensky and Semenovsky regiments. 9 on April 2013, the 154-th separate commandant regiment was given the honorary title "Transfiguration". And on April 16 of the same year, the 1-th separate rifle regiment was given the honorary title "Semenovsky". So the glorified parts found a second life.

In the XVIII century, the Russian Guard in full force took part in the Northern (1700-1721) and Russian-Swedish (1741-1743) wars. Separate guard detachments also took part in the Russian-Turkish (1735 1739 and 1787 1791) and Russian-Swedish (1788-1790) wars. At the same time, the guard in Russia had a very large political influence, taking an active part in the famous palace coups of the 18th century. In those years, the Guards regiments prepared officer cadres for the entire army and were staffed almost exclusively by nobles, for whom military service was compulsory. From the middle of the 1730-s, the rank-and-file Guards also began to be supplemented with recruits from the tax-paying classes, and in the 1762 year after the manifesto on freedom to the nobility, this method of recruitment became the main one.

The guard was an elite part of the Russian army, so enjoyed a lot of privileges. So according to the Table of Ranks (1722 year), the officers of the guard had the seniority to ordinary army officers in two ranks. In 1813, the Young Guard was also approved in the country in addition to the Old Guard. This name was later assigned to the two Grenadiers and one cuirassiersky regiment, they were noted for their military successes during the Patriotic War 1812 of the year. The officers who served in these regiments were given one rank advantage over their army counterparts. This order existed in the Russian Empire until the end of the 19th century, when Emperor Alexander III cut down the privileges of the guard: in the Old Guard, the seniority of officers was reduced to one rank, and the officers of the Young Guard were abolished altogether. 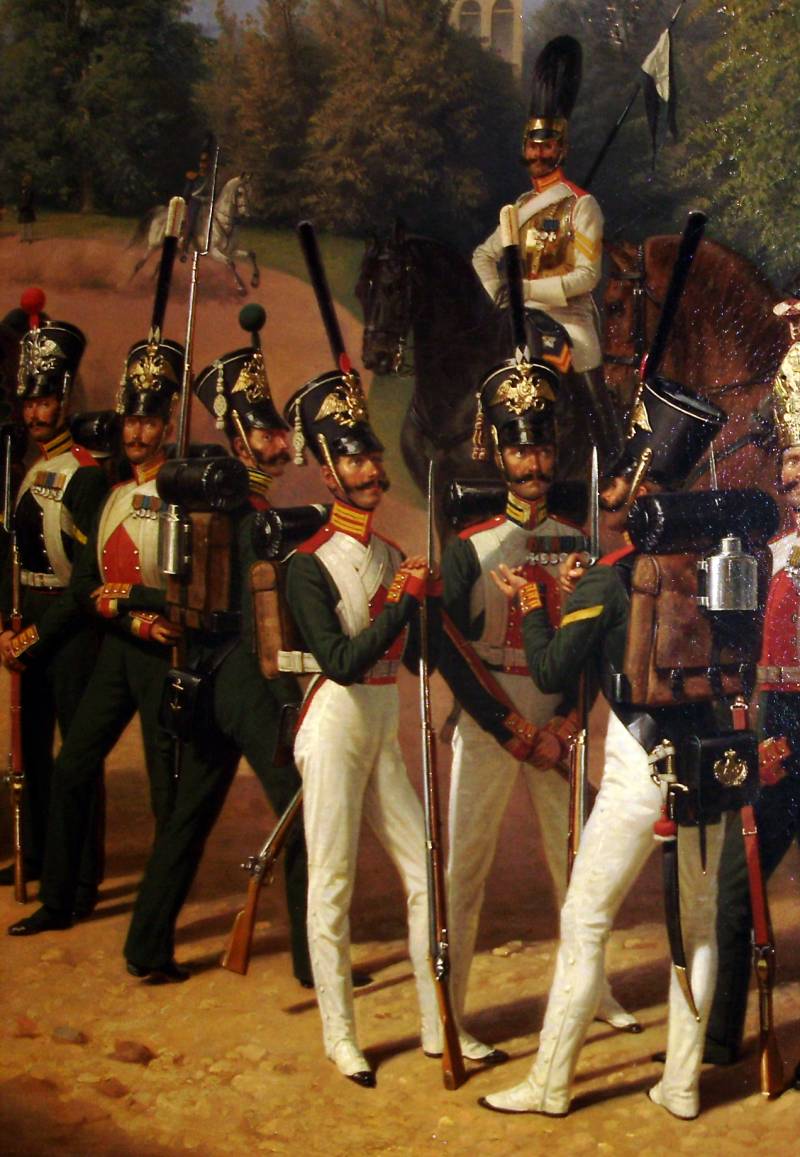 Franz Kruger, Russian Guard at Tsarskoe Selo in 1832 (1841).
If the officers in the guards overwhelmingly were nobles, they tried to select the soldiers first of all for “quick mind”, skillful possession weapons, courage and courage in battle. In addition, of course, good physical data were taken into account. In the end, a large role was played by the appearance of military personnel. The tradition to select recruits by color of hair, eyes and facial features was formed in the Russian Empire in the 30-s of the XIX century. In the Preobrazhensky regiment they picked blonde and the tallest; in Semenovsky they took blondes, in Izmaylovsky regiment - brunettes, in the leyb-huntsman - light-built people with any hair color. In the Life Guards, the Moscow Regiment recruited red, in the Grenadiers - brunetov, in Pavlovsky - red and snub-nosed, in the Finnish criteria were the same as the rangers. The Cavalry Regiment tried to recruit the tallest blond and bay horses, while the Equestrian Guard had brunettes and black horses. The Cuirassier Regiment of Her Majesty - blondes on Karak (dark bay) horses, Cuirassier of His Majesty - red on red horses.

The privilege of the guard, its difference from ordinary army units, was emphasized by the special status of service, special insignia, as well as a special form of clothing. Each Guards regiment of the Russian army, as well as each separate unit, had its own uniform, badges, pennants, standards and banners. From the beginning of the 19th century, the St. Andrew's Star served as a symbol of the Russian Guard (from the Order of St. Andrew the First-Called), on which the motto “For Faith and Loyalty” was inscribed. 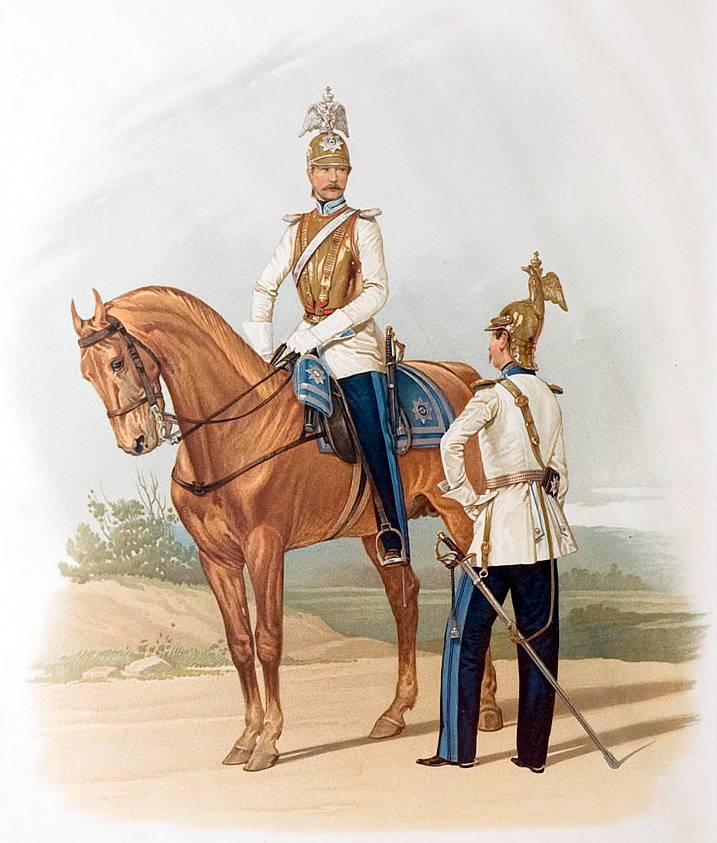 Pirate K. K. Ober officers of His Majesty’s Life Guard Cuirassier and Her Majesty’s Life Cuirassier regiments, 1855 year
For more than two centuries history Russian guard organizational structure of units has changed many times, while maintaining a steady upward trend in the number of such units and their numbers, and increased military capabilities of the guard. If under Peter I in 1700, the guard consisted of only two regiments (total number of about three thousand people), then in 1812 there were already 12 regiments, an artillery brigade and several other units (about 18 thousand people). At the beginning of World War I, the Russian Imperial Guard was already consolidated into 4 Guards infantry divisions, two Guards cavalry divisions, a separate Guards cavalry brigade and a number of separate Guards units and divisions of the regiment-battalion (division) - company. In total, it consisted of about 50 parts and more than 90 thousands of people. The cavalry general was commanded by the Grand Duke Nikolai Nikolayevich, who also headed the Petersburg Military District. After two revolutions of 1917 and the collapse of the empire, parts of the Russian Imperial Army were disbanded, and the Guard was abolished along with it.

In the Soviet Union, the first Guards units appeared only during the Great Patriotic War, when the Soviet Guard was born. The Soviet Guards are military units, formations and unions of the USSR Armed Forces, as well as warships that received the honorary title of the Guards for mass heroism, courage, and high military skills that they showed in combat during the Great Patriotic War, as well as rocket artillery and newly formed formations (formations), which included units (formations) that had previously received the honorary title of the Guard. 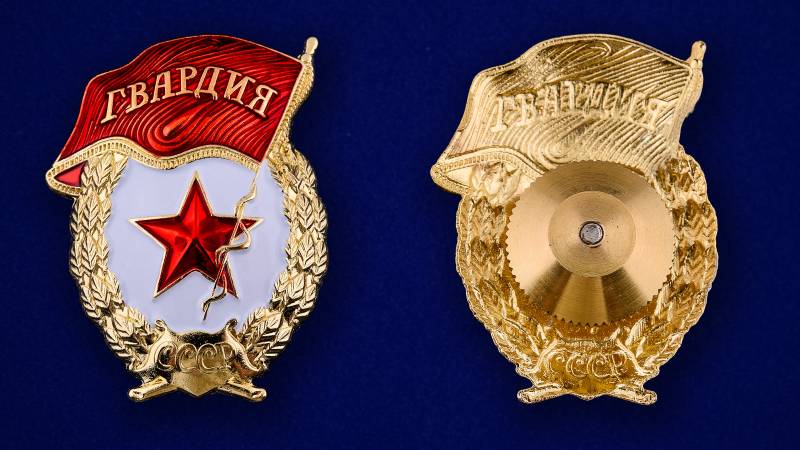 Badge "Guard"
Guards units, formations and ships in the USSR were awarded Guards battle flags. 21 in May 1942 was a special “Guard” badge for military personnel of the Guards units, and a rectangular plate with orange moire ribbon with black longitudinal stripes was established for the guardsmen of the RKKF. At the same time, the military ranks of the Guards were introduced, after which, before the military ranks, soldiers and officers who served in the guards units on ships added the word “Guard” (for example, private guard or lieutenant guard).

The birthday of the Soviet Guard is considered to be 18 September 1941 of the year. On that very day, in accordance with the decision of the Supreme Command Headquarters for mass heroism and courage of personnel, four rifle divisions were ordered by the order of the Soviet Union Commissar of Defense: 100, 127, 153 and 161, respectively, were renamed 1, 2-th, 3-th and 4-th Guards infantry divisions. 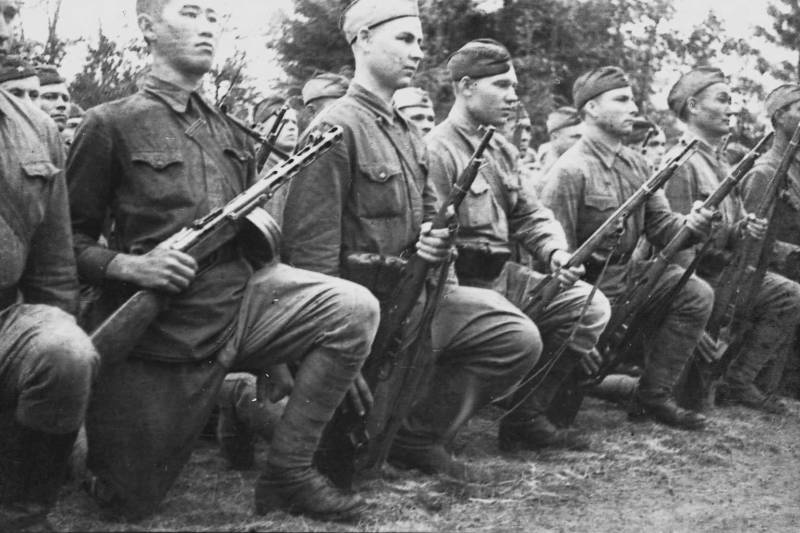 The soldiers of the Red Army during the ceremony of the Guards banner, photo: waralbum.ru
By the time the Great Patriotic War ended, the Soviet Guard already included 11 combined arms and 6 tank armies; 40 rifle, 12 tank, 9 mechanized, 7 cavalry and 14 aviation buildings. They numbered 215 guards divisions, consisting of fleet there were 18 guards surface warships, as well as 16 submarines. After the end of World War II, differences in the states of formations and units were abolished. In peacetime, the conversion of military formations into guards was not carried out. At present, as part of the Armed Forces of the Russian Federation, the name of the guard is retained as part of the units, ships and formations, as an honor.