How the Germans and the Swiss considered their gold 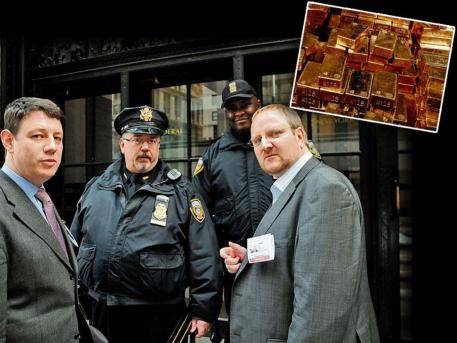 The German edition of Bild (bild.de) March 6 published an article by Ralph Schuler "3401 ton of gold". Yes, even with a photo: "The picture near the gold reserves of the German people in New York."


The author of the article reports from New York that “the most valuable treasure” owned by the Germans is 3401 ton of pure gold, which equals “about 1800 euros for each.” R. Schuler exclaims: “It is completely crisis-free, distributed among the safes of high reliability in Frankfurt, Paris, London and New York! And Bundesbank doesn't care about that! ”

“An incredible golden scandal!” The correspondent exclaims again. He notes that “for the last time in 2007, Bundesbank took one glance at our gold reserves in New York and even disturbed the Federal Audit Office (the test continues).”

According to Professor Jörg Betg, whose words are quoted by R. Schuler, there is a clear violation: "The control calculation of ingots must be done at least once in 3 of the year." But this Bundesbank did not.

Further in the article it is reported that in the annual balance of the Bundesbank gold reserves (their actual value - approximately 147 billion euros) make up a very large share - over 17%. R. Schuler asks a question: are there any mistakes in the balance sheets of the Bundesbank in recent years?

Ralph Schuler writes: “Alarmed by the message“ Bild, ”the Bundestag deputy from the CDU and foreign policy expert Philip Missfelder wanted to know it more precisely.” Referring to the “Bilda” note, a member of parliament demanded from the President of the Bundesbank Jens Weidmann “a list of gold bars. Missfelder said "Bilda": "I was shocked. At first they said that there is no list. Then there were the secret lists. Then they told me that my questioning threatened the trust between the Bundesbank and the Fed. ” (By the way, Mr. Weidmann does not seem to worry about German gold at all. His words are quoted by the American newspaper "New York Times" March 13: "The German economy is in amazingly good shape." The author of the article is Jack Ewing).

When the Bundesbank learned about the search for “Bild” of German gold, “the head of the public relations service, Michael Best, even tried to prevent the deputy from visiting and reporting to Bilda ...”

“What does the Bundesbank want to conceal?” R. Schuler asked himself.

However, "Bilda" in the person of Ralph Schuler (the company he was Missfelder) but managed to visit Manhattan - in the US Federal Reserve Bank. Schuler went down into the depth, on the fifth floor down, level "E". “Clean floors, droning ventilation, giant steel doors. And - 7000 tons of gold! "

The stubborn German reporter asks: “But where is German gold?”

And Jack Gatt, a spokesman for the Fed's vice president, says that German gold is “in some of these 122 steel barred offices. I can’t say more. ”

R. Schuler notes that Bilda has no chance to see precisely German bars.

Jack Gatt, however, assures the correspondent: “There are lists with all the bars. Each ingot has a number, a stamp for the degree of purity of gold and a seal. ”

But the journalist knows: the German gold reserve must be calculated according to the law. And he is echoed by Bundestag deputy Philippe Missfelder, who suspects that something is unclean on the balance sheet of the Bundesbank: "This is a case for parliament." Missfelder requires a clear inventory of the gold reserves of Germany.

The article ends there, but the case with Germany’s gold reserves went further.

The next day, March 7, was posted on goldcore.com "Germany: to the consideration of the gold reserves of the Bundesbank in Frankfurt, Paris, London and the Federal Reserve Bank of New York".

Among other things, the article deals with the fact that German legislators should consider “managing Germany’s gold reserves. The Parliamentary Budget Committee will assess how the central bank manages its inventory of gold bars in Germany, which are believed to be stored in Frankfurt, Paris, London and the Federal Reserve Bank of New York, according to the materials of the German newspaper “Bild”.

Immediately posted a photo from the "Bilda": Schuler and Missfelder in front of a building in Manhattan.

It further states: “The German Audit Office criticized the weak revision in the Bundesbank and the control over the state of Germany’s relatively large gold reserves - 3396,3 tons of gold, or approximately 73,7% of Germany’s national foreign currency reserves.”

The next paragraph: “This caused an increase in nervousness among the German public, German politicians and the Bundesbank itself about the enormous risk in the balance sheet of the central bank of Germany, which led some people in Germany to comment on the location problems and the exact amount of German gold reserves.”

Public issues are related to the fact, it is noted in the article that the system of the Central Bank of the Eurozone was unbalanced due to the fact that the volume of assets on the balance sheet of the ECB reached 3,02 trillion last week. euro (3,96 trillion. dollars), which is "by 31% more than Germany's GDP ..." "Record" is associated with the issuance of the second part of three-year loans to banks in Europe.

That is why in Europe they worry: they are already thinking about the collapse of the Eurozone. At the same time, “losses of the Bundesbank can amount to half a trillion euros - more than one and a half of the size of the annual budget of Germany.

In such a gloomy scenario - the collapse of the European Union - “gold reserves would be necessary for Germany to maintain the currency - will it be the new euro, or will it be a return to the Deutschmark”.

“German lawmakers,” the article says, “followed in the footsteps of American presidential candidate Ron Paul, who has long been calling for an audit of US gold reserves.

It is estimated that approximately 60% of German gold is stored outside of Germany, and most of it is stored in the Federal Reserve Bank of New York. ”

The article proposes a scenario for the Germans: “Germany and other central banks can follow Hugo Chavez and repatriate their gold to Germany in order to directly own it and own gold reserves for better preparedness for a system or monetary crisis.”

As noted resource zerohedge.com, "Germany is not alone." In the article “Switzerland wants to get its gold back from the Fed” it is reported that recently four members of the Swiss parliament launched the so-called “Golden Initiative”. The original source of the Initiative in English, French and Italian can be found on the website. http://www.goldinitiative.ch/ (in the upper right corner, under the links: FR, IT, EN; in .pdf format). In the original language, i.e. German, here: http://www.goldinitiative.ch/initiative/wortlaut-der-initiative/index.html.

The “golden initiative” is simple. It has only three points:

1) the gold reserves of the Swiss National Bank are not sold;

2) gold reserves of the Swiss National Bank must be stored in Switzerland;

3) The Swiss National Bank must store its assets in large part in gold. The share of gold should be more than 20%.

And here are some quotes from another page. "Golden Initiative":

“Did you know that during the 5 years the national bank sells an average of 1 tons of gold every day? The fact that already more than half of the national gold wealth, namely 1550 tons, was sold at the lowest prices? The fact that the responsible person of the federal council answered the question of where the national gold is stored answered in parliament: “Where these gold bars are now located, I, unfortunately, can’t tell you for sure, because I don’t know this either, I don’t need to know I don't want to know that. ”

“Until the nineties, there was nothing more reliable than the Swiss National Bank. Under domestic and above all foreign pressure (from the USA), the national bank declared most of its gold and foreign exchange reserves “redundant” - and sold during the period from 2001 to 2006. at a negligible price of 1300 tons. Later - more 250 tons to buy foreign exchange. This hastily sold gold would today be equivalent to an amount of approximately 75 billion francs. ”

Further, it is noted that only 1040 tons of gold remained in the Swiss National Bank. The Swiss are afraid that this remnant will not disappear, therefore they put forward the “Golden Initiative”.

“Gold reserves belong to the people,” say its authors.

Thus, there is a nascent European initiative to return gold reserves to their historical homeland. The “gold rush” has been caused not only by the fact that central banks can make erroneous decisions subject to fair public criticism, but also by that (in the case of German gold) that they cannot find it - neither in the Bundesbank, nor in the US Federal Reserve.