3 September 2017
20
On August 16, the Norinko corporation held a “Day of armored vehicles and anti-tank weapons” at the test site near the city of Baotou (Inner Mongolia). Second time in stories Chinese defense industry.


In the closed pavilion 34 samples of tracked and wheeled armored vehicles were presented. To demonstrate the acceleration and overcome the standard obstacles involved a part of the production site with an unpaved surface.

BTR in the Russian style

Chinese gunsmiths showed a light battle tank VT-5 (curb weight - 33 tons). It is equipped with a 800 horsepower turbodiesel engine and automatic transmission. The main armament is a 105 mm smoothbore gun. The ammunition includes feathered and sub-caliber armor-piercing, high-explosive fragmentation shells, laser-guided missiles. Ammunition designed to combat tanks, from a distance of two thousand meters they pierce a sheet of homogeneous armor with a thickness of 550 millimeters. In the version for the mountain rifle brigades of the PLA, the tank tower is equipped with mounted modules of dynamic protection of the Reaction-4 series.

The same gun was installed on the new wheeled assault vehicle under the designation ST-1, created on the basis of the floating Type-08 armored personnel carrier with the wheel formula 8 х8. Diesel BZ6M1015CP from the German company DEUTZ provides an armored vehicle weighing 23 tons of maximum speed 100 kilometers per hour. Power reserve with full refueling - 1000 kilometers. When driving on water, the maximum speed is eight kilometers per hour. The turret has mounting points for an anti-aircraft machine gun and eight launchers (launchers) for smoke curtains of 76 caliber of millimeters. Inside the tower, you can install a twin 7,62-mm machine gun. It is known that the welded hull is made of composite armor, which protects the crew from firing from the 25-mm gun into the frontal part and automatic weapons 7,62 caliber in the side and back surface from a distance 100 meters. The machine is adopted by the naval infantry of the PLA. 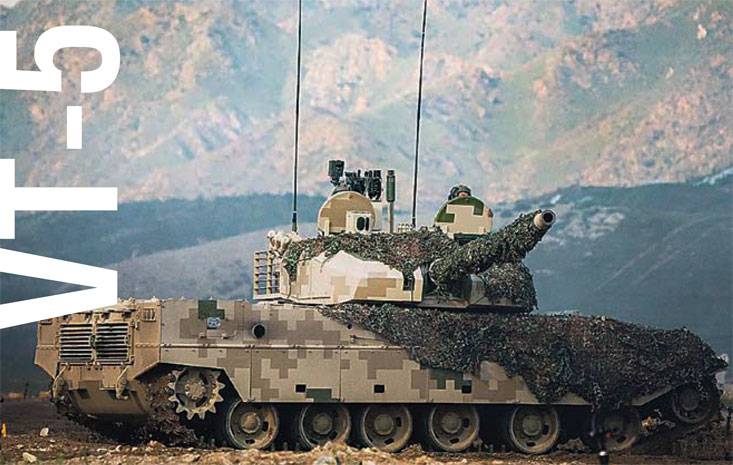 Another new product from Norinko was a heavy infantry fighting vehicle under the designation VN-17, built on the basis of a light tank VT-5 using the same type of engine, automatic transmission and communication systems. It is noticeable that the designers were impressed by the Russian BTR-T and T-15. The weight of the Chinese heavy BMP reaches 30 tons due to enhanced dynamic protection, which reliably covers the entire body of the machine. On the VN-17, an off-board turret with an 30-mm automatic cannon, two “Red Arrow 12” ATGM and 12 PU for smoke grenades. Arming guidance is provided by a two-channel opto-electronic station with a laser rangefinder.

On the basis of the time-tested BMP-3, Chinese designers created for export fairly heavy (23 tons) BMP VN-11А. In the habitable WA333T1B turret, an 30-mm cannon is installed, on the external points - the classic “Red Arrow 73D” ATGM and six PUs for the installation of a smoke screen. The power of the VN-11А engine is 440 kilowatts, the power reserve at full refueling is 500 kilometers. The crew - three people, in the landing compartment seven seats. A distinctive feature of the BMP is the bolted scheme for attaching additional sheets of armor. Both the driver and the landing party are provided with side triplexes to monitor the situation.

At the Baotou proving ground, for the first time, a heavy infantry fighting vehicle developed on the basis of the tank "Type 59D" (the Chinese version of the Soviet T-54 / 55) appeared to people. Engineers upgraded it with the aforementioned WA333T1B turret with the 30-mm gun and the Red Arrow 73D. Chinese observers state that the body armor protection is seriously enhanced due to both thickening up to 600 millimeters and the use of a large number of dynamic protection units. BMP is designed for buyers from more than 20 countries of Asia and Africa, in the armies of which a significant number of tanks "Type 59D." The approach was borrowed from Israeli specialists, who continue to work on the modernization of heavy Timer BMP for the IDF.

It should be noted that the designers of Norinko offer to install UW-4 uninhabited modules in which the 30 caliber millimeter and 12 PU guns are mounted for the smoke screen, and for light armored vehicles they offer an option with an 12,7-mm machine gun.

The armored vehicles that participated in the dynamic display were covered with camouflage kits of special fabrics that hide it in the radar and infrared ranges. Such an approach allows both to reduce the cost of repainting and to increase survivability in combat conditions.

Also in the pavilion and in the open area were presented armored wheeled vehicles with different levels of armor and armament, including for the first time - transport VP-22, modeled on the Russian "Typhoon-K" taking into account information about the operation in Syria.

It is known that in the closed pavilion PU heavy ‑ missiles “Red arrow 10” were demonstrated. These anti-tank ammunition are placed in eight units on the basis of tracked infantry fighting vehicles VN-11 (a copy of the Russian BMP-3), which, according to the Chinese military, should allow the division of such anti-tank guided missiles consisting of nine vehicles to confidently destroy enemy armored vehicles in four minutes around 60.

At the stands, one could also see the “Red Arrow 12” ATGM (production designation GTS7), which looks like the famous American FGM-148 “Javelin”. Chinese manufacturers do not hide the fact that they borrowed some constructive solutions from American gunsmiths. PU provides a cold start of the ammunition at 30 meters, after which a single-stage solid-fuel engine is triggered, providing an average flight speed of 200 meters per second.

Some tactical and technical characteristics of the Red 12 boom: missile weight - 17 kilograms, PU - 5 kilograms, missile length - 1,25 meters, caliber - 170 millimeters. The launch range for infrared hover is 2000; when using a television system, it is 4000 meters. At a distance of 2500 meters, the tandem warhead pierces 750 millimeters of homogeneous armor.

For the first time, the Chinese military observers were presented with a heavy increased range ATGM “Red Arrow 11”, the missile of which, with a launch mass of 30 kilograms, has a maximum launch range of 10 kilometers and is actually a multipurpose ammunition that can fight any enemy armor, even in fortified positions.

Helmet for the tank

At the "Day of armored vehicles" a video was shown showing the operation of the GL-5 active protection system (SAZ) installed on the roof of the Type-96 MBT tower. According to information from the manufacturer, over the past two years, engineers have made great efforts to refine the SAZ - problems with radar power supply with an active phased antenna array and its cooling have been fixed.

The GL-5 system includes four panel radars. Each includes six receiver-emitters, of which two are responsible for target detection, two for tracking and two for targeting interceptor shells. The destruction of anti-tank ammunition is assigned to four launchers, each with three shells. They are installed in guides with 30 degrees of rotation from the mount axis, which allows covering the sector in 90 degrees.

For the GL-5 computing station, Chinese specialists have developed a special algorithm. When an anti-tank projectile is detected, it will immediately use two interceptor munitions, which according to calculations is guaranteed to remove the threat. The maximum effective interception range is 100 meters, while the minimum can be ten times less, which, however, does not ensure the safety of optical-electronic systems and anti-aircraft machine guns located on the roof of the tank. The turret provides space for additional 24 interceptor shells, which allows SAZ to be reloaded twice.

Some Chinese experts note that while the GL-5 is capable of intercepting only ammunition that flies up to the tank at a speed of no more than 1800 meters per second. It is obvious that the designers are trying to create a system that should not be inferior in efficiency to the Russian Arena and the Ukrainian Knife.

Note that the equipment presented in Baotou is intended mainly for export.