August 31 2017
32
In Lithuania, they understood how to secure themselves from the Russians. Need to build a fence. Two meters high. “We know how it feels to live next to Russia,” they say in Vilnius. However, experts object: how a two-meter fence will hold back Tanks? It turns out that the money on the fence will be wasted. 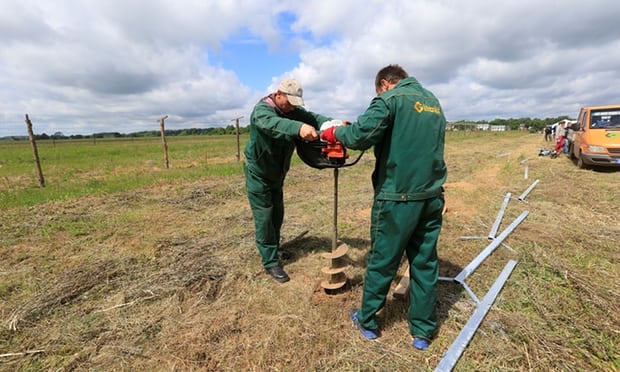 Lithuania is building a fence on the border with Kaliningrad, writes D. Boffi in a British newspaper «The Guardian».

Vilnius responds in this way to Russia's Baltic activity: large-scale military exercises, cyber attacks, the deployment of missiles and the "capture of an Estonian official."

45 kilometers of the land border, on which the Ramoniškiai crossing is located, are worried by the government in Vilnius. Soon, Russia will begin large-scale military exercises “West 2017”, and “approximately 100.000 military personnel” and technical equipment will approach the eastern borders of the European Union and NATO, the journalist writes. Vilnius also takes into account “ongoing cyber attacks on Lithuanian government departments,” which officials describe as a “massive information war”, and the deployment of Iskander missiles based on the Baltic last year fleet Russia in Kaliningrad.

1 August. NATO members have spotted 18 Russian military aircraft in international airspace over the Baltic Sea. According to the Ministry of Defense of Lithuania, most of them flew to the air base in Kaliningrad or from the base “without flight plans and with transponders turned off”.

This year, NATO deployed four battalion groups in Poland, Estonia, Latvia and Lithuania. In a word, “the times are alarming,” notes the journalist. Therefore, Lithuania is building a two-meter border fence from the Ramonishkiai checkpoint located opposite the barbed wire stretched by Russians five years earlier.

Opposition politicians in Lithuania have condemned the construction as a meaningless waste of money.

“This is stupid,” says Eugenijus Gentvilas, leader of the Liberal Movement in the Lithuanian Parliament. - What can we hide from? From the tanks? Of course not".

There is also the opinion of local residents. They hardly hope that resistance at the border can stop the invasion. “If this happens, it means it will,” they say.

Lithuanian Interior Minister Eymutis Misiunas told the Guardian correspondent that the fence will serve primarily the fight against the smuggling of alcohol and tobacco. It is also being built to prevent illegal border crossings. True, the official further acknowledged that this is not all.

According to him, "everyone knows the second reason." “Estonia has accused Russia of kidnapping a scout, and we in Lithuania do not want this to happen to Lithuanian officers. This [fence] is similar to the red line for Russia, ”said the minister.

The incident to which Misiunas referred in his commentary occurred three years ago. Since September 2014, when the “armed Russian men” took Eston Kohvera, fear settled in the hearts of the Baltic politicians. Tallinn insisted that this officer was kidnapped on Estonian territory. However, the FSB continues to "successfully declare" (in Russian courts) that Mr. Kokhver was a "spy" on Russian territory and deserves punishment.

It is curious that the incident with the aforementioned “spy” occurred only two days after the visit of the American President Barack Obama to Tallinn, where he swore that the attack on Estonia would be considered an attack on the whole of NATO. Mr. Obama also hinted at the creation of an American naval base in Estonia.

How can save the fence from the Russian invasion? Obviously, none. For what purpose is it built?

Political analyst Vladimir Bruter states that the construction of the Lithuanian fence looks ridiculous, because the Russians do not seem to run to Lithuania. “The Lithuanian authorities are trying to show their citizens that they are supposedly protecting their interests, although it would be better for them to create jobs for them,” said Bruter Reedus.

Stanislav Byshok, an analyst at the CIS-EMO international monitoring organization, believes that jobs can be a positive result of the intake initiative.

“Still, Lithuania is a small country, with a declining population, with a fairly small amount of work for the remaining citizens,” he told the agency. - By and large, if they really implement such a large-scale project, it will at least provide employment for a sufficient number of people. Because, in addition to the wall, there still must be some kind of infrastructure, additional roads, warehouses, houses, logistics points. If you tackle it wisely, you can arrange 10% of the working-age population of Lithuania for the year of receiving money for this work. ”

“We need to show some kind of activity that protects here and now. And since laws and rules do not protect anything, here is a wall for you, ”adds Bruter to this.

The construction of the border fence, as indicated by the press, will cost Lithuania 3,6 million euros.

We should not think, let us note, that the Lithuanian intake initiative represents something special or even unique. “Fences from the Russians” are being built simultaneously by several countries, while others have already been built.

In Latvia, in 2016, a long fence was planned, and in early February, 2017 was erected on the border with the Russian Federation a fence with a height of 2,7 m and a length of 23 kilometer. They also equipped the border strip with a length of 65 kilometers. According to the plans, in 2017, it is supposed to equip the strip in 150 kilometers. As for the fence, by the end of the year, the authorities promise to extend 60 kilometers of the fence. The fence and the strip will take until the end of the year 6,3 million euros. Work will continue until 2019. An 193 kilometer of barbed wire fence will be built. By the time the Russians will attack, or not, it is not known.

The total cost of the “fence” will be, according to the plan, 17 million euros. By the way, the Latvians will not cover the entire border: the total length of the border with Russia is almost 270 kilometers. 193 kilometer fence - these are only those areas where there are no natural obstacles.

On a more expensive project, Estonians waved. At the same time, their fence will climb only 2,5 m and stretch just 90 kilometers. Here and there water will prevent. Well, the way out is found: where it is impossible to put a fence, Estonians will put buoys. The government allocated 74 million euros from the budget to strengthen the border zone with Russia.

They started talking about construction plans in Estonia in 2015, in the spring of 2016, they repeated. Works are expected to be completed by 2020 year.

The fastest was Norway. While the Estonians and Latvians are planning or building little by little, the Norwegians took and set up a fence on the border with Russia. This was done last fall. The goal of the construction was not the “invasion of Russia”, but the desire to protect themselves from illegal emigration: following 2015, more than five thousand “guests” arrived in Norway - refugees from Russia who crossed the Norwegian-Russian border in the winter.

This fence turned out to be more serious than Baltic crafts. Its height is three and a half meters, it is made of steel rods. True, it is relatively short - 200 meters.

The Norwegian intake construction challenged the head of the Secretariat of the Council of the Barents / Euro-Arctic Region Lars Georg Virdal, recalls "BBC". He noted that the construction of the barrier would not solve the problems of the border guard over the 200-kilometer border with Russia. The very idea of ​​enclosing has a taste of the cold war.

Those who like the "taste of the cold war", we note, got a taste and start to rivet fences from all sides. Latvia, Lithuania, Estonia, Norway ... Who is the next participant in the socialist competition?