7 September 2017
176
“Their tongue is a killing arrow, speaks insidiously; they speak to their neighbor with their mouths in a friendly way, and in their hearts they build coves for him. ”
(Book of the Prophet Jeremiah 9: 8)

All revolutions, especially if they are “colored,” have the same structure. Like any other social structure, it has the shape of a pyramid and also includes three types of people. Higher, middle and lower. On the top "floor" are high-ranking patrons of those who make the revolution, that is, people or a group of people who prepare and finance its cadres, direct them, prepare the "process" and optimize the information environment in which it goes, in their own interests. Such patrons of revolutions are usually very influential, but they themselves never act directly, but prefer to use the services of intermediaries. This allows them to always maintain a decent view in the eyes of the world community. 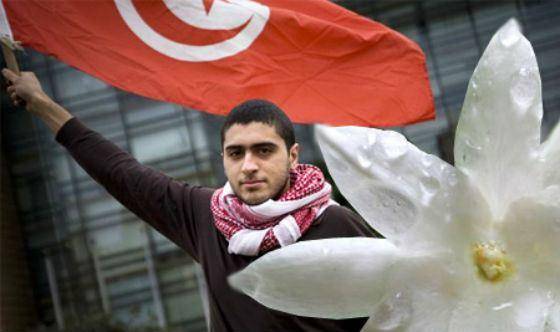 The Jasmine Revolution in Tunisia led to the resignation of the government of al-Ghannushi.

The middle ones are the direct organizers of the upcoming coups. As a rule, they become young people of a clearly pro-Western orientation. In turn, this large group is subdivided into two small ones, or rather, differing in the specifics of their actions. The first consists of specialists in the field of PR-technologies, as well as professional psychologists, sociologists and journalists. In short, people who manage information. They create the necessary background to create a negative attitude of the people towards the official authorities. In the future, it helps to lose this power, of course, provided that no one will defend it. Many of these specialists are citizens of foreign countries, often with no relation to the country of the “color revolution”. They can write anything and about anything equally talented. For this they pay, and very well.

The second category is nothing more than the “face” of the revolution. These are also quite young people, but these are politicians, leaders of the revolution, well recognized by representatives of the popular masses. Usually these people after the victory of the revolution become the new leading elite of the country. Some of these leaders, such as Mikheil Saakashvili, for example, studied in the US, have connections and support there, and it is clear that they will eventually have to pay for this very support.

Below are the very “simple people” that leaders take to the streets and squares. Often they do it for ideological reasons they have, but it happens that they get paid for it and why not “cut the money at an easy price,” then, they argue. After all, shouting in the square is not a roll of bags!

Well, now let's see what, in fact, and why the “color revolutions” differ from the “non-color revolutions”. To begin with, in former times, it was also necessary to dismantle political regimes. But then the main tool of such dismantling was a force decision. That is, it was usually an armed coup - “pronunciamento” (as it is commonly called in the countries of South America), a local military conflict, a civil war or foreign military intervention.

It was a time when human life cost very little. But ... time passed, its value increased, the media began to report on the human losses in 1-2 in a way that they had not previously reported thousands of losses, so the power deprivation of the power of an undesirable government became ... "not popular."

Therefore, we note the main thing - “color revolutions” - this is a technology of a coup d'état, when pressure on power does not occur in the form of direct violence (“The guard has tired! Free the room!), But with the help of political blackmail. Moreover, its main tool is the youth protest movement, that is, the most valuable part of society participates in it, because there are few children and, therefore, young people themselves, and besides, everyone knows that “the future belongs to the young!”

Although the states where these revolutions took place, and differ in their geopolitical, economic and social position, they all have the same organizational scheme. That is, they occur as a youth protest movement (they say, how to shoot young people while dispersing such speeches, this is a crime!), And then marginals, old people and old women who want to “shake old things” and even stand next to young people join it from which it breathes with the energy of youth and enthusiasm. In this way, uneven-aged crowds are being created, about which the necessary media immediately report that this is a “people”, and thus the opposition has a real tool of political blackmail. This alone directly indicates that the color revolutions, even in principle, cannot ultimately fulfill the objective hopes and aspirations of the majority of the country's population. But there is also the “Pareto law”, which generally “prohibits” any revolution, since even a victorious revolution only changes the situation of 20% of the population, while the rest of 80% gets only beautiful slogans and promises of a “bright future”.

Thus, any “color revolution” is a coup d’état, signifying the seizure of power by force, designed in the form of a peaceful protest movement. There are no shots, and there seems to be no reason for the authorities to use six-barrel machine guns capable of sweeping away any crowd rally from the streets and squares. In addition, there is “world public opinion”, which the government fears, “sanctions against the regime that suppresses democracy in its country,” that is, everything that, under the conditions of the international division of labor, any government has to fear.

The object of the "color revolutions" is state power, the subject of which is the political regime existing in the country.

Today, the “color revolutions” have everything necessary for their victory, provided that they are well prepared and organized. Let's start with the most important condition. This is the presence in the country of a certain political instability or a crisis of the existing government. However, even if the situation in the country is still stable, one can try to destabilize it artificially.

It is only necessary to have a specially prepared protest movement of young people.

The characteristic features of the “color revolution” are as follows:
- the impact on the existing power occurs in the form of political blackmail, they say, if you do not “give up”, it will be worse.
- The main tool - the protesting youth.

It should be borne in mind that the “color revolution” only outwardly resembles the “classic” revolutions, caused by the objective course of historical development. “Color revolutions” are just technologies disguised as a spontaneous revolutionary process.

True, there is such a point of view that these “events” can have a spontaneous start, that is, some objective social contradictions, in which quality usually lead to poverty, fatigue from the political regime, people's craving for democratic changes, and unfavorable demographic situation. Most often, however, this is not the only reason for them. For example, in Egypt, before the color revolution, “subsidies for flat cakes” were heard, that is, the government gave the poor people money for bread cakes - the staple food, but at the slums of Cairo one could see a satellite television dish on every roof of the hut. The same was true in Libya, where the citizens were paid natural rent (and a lot of other additional payments), which is so significant that the aboriginal population did not want to work, and guest workers from Egypt and Algeria began to work in Libya. In Tunisia - the most democratic state among the authoritarian countries of the African continent, the standard of living is very close to that of Southern France (Provence and Languedoc), and the standard of living in Southern Italy even surpassed. The most “amusing”, if I may say so, reason for the start of the protest movement in Syria was related to the fact that President Assad decided (and without any external pressure!) To soften the authority of his regime and began to carry out liberal reforms. In theory, it would be necessary to rejoice and support such a leader, but this seemed not enough for the “people” (like in Russia in the case of Alexander II), and as a result we have what we have today.

Supporters of the dramatization of the “color revolutions” indicate that they all look as if they were made for a carbon copy, and the probability of such a phenomenon in nature is extremely small. They also have their own signs that allow them to say that they are happening “not just like that”:
First, in the foreign policy arena, “color revolutions” are generally supported by the United States and its allies.
Secondly, all the “color revolutions” follow a very similar scenario, one might say, according to one pattern.
Thirdly, they use technologies of reflexive control, which are also an American invention.
Fourth, they do not have their own revolutionary ideology, which is caused by the fact that the Americans themselves, being the authors of all these revolutions, have a poor understanding of the mentality and psychology of different peoples, therefore they cannot create for them their “own” ideology, which would organically accept all strata of the local community. Instead, someone else’s ideology is being imposed with the expectation that the majority of the people will consider "what will not be worse." And the most interesting thing is that it often happens. Someone gets worse, someone is better, but how do you know the percentage ratio of those and others, when all the media are controlled by the winners. “Stop paying rent”? But now you have freedom, but before that Gadhafi’s tyranny was and ... what could you argue against that? That life was better economically? But now it depends on you to make it the same as ours. You just need to be patient a little ... "Moscow was not built in one day either!"

“Color revolutions” are considered to be an instrument of “soft power,” since they use no forceful means to change the political regime in the country. However, it is wrong to consider them, by virtue of this, a more progressive, less bloody, and therefore a far less dangerous form of popular protest against totalitarianism. Why? Yes, first of all, due to the multiplicity of features of the historical and cultural development of a particular nation and its historically developed mentality. It should be remembered that in any case the “color revolution” is a form of organizational state blackmail, the object of which is a sovereign state, but disguised by a legend and beautiful slogans of the “real” national liberation revolution.