August 30 2017
20
The VKS of the Russian Federation destroyed the jihad-mobile plant in Deir ez-Zor, the Syrian army lost more than 70 soldiers in a day, civilians fleeing from Akerbat, reports FAN with reference to Syrian sources. 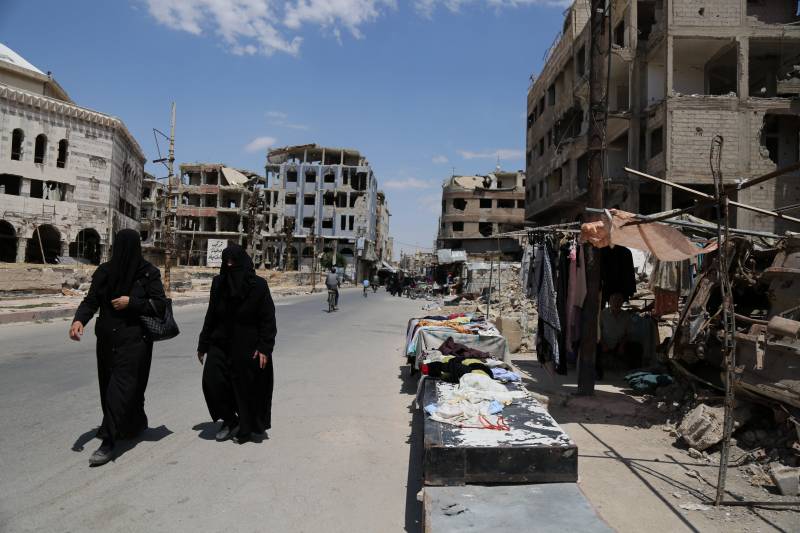 Hezbollah announced its full release from the IG West Kalamun terrorists on the Syrian-Lebanese border. During the sweep of the territory of the province of Damascus, seven soldiers of the SAR army and 11 soldiers of the Lebanese detachment were killed.

In East Gute, Damascus is gaining momentum in the confrontation between the CAA and the militants of the armed opposition. The SAR Army inflicts mortar strikes on militant positions in the Jobar and Ain Tarma areas. Armed clashes were also observed in the Al-Manashir district near the Harmal Bridge and the Al-Hansa school in Jobar, Zamalka and Ain Tarme. An attempt by the Syrian army to advance at Ain Tarme was unsuccessful. The CAA met with fierce resistance from the armed opposition. By the end of the day, it was reported that the SAR army had established control over seven buildings near the Sumbul gas station in Ain Tarme.

In Aleppo, clashes continued between the Kurdish militia and the Syrian Free Army (SSA) supported by Turkey. In the northern suburb of Aleppo, SSA militants opened mortar fire at positions of the Syrian Democratic Forces (SDF). In addition, the location of Kurdish troops in the village of Kastal came under artillery fire from Turkey. The Kurds, in turn, fired on the positions of the "free army" near the city of Mara in the north of the province. In an exchange of fire between the SSA and the Kurds, 11 civilians from the northern villages of Tal Malid and Kalzhibrin, including four women and two children, suffered. Russian military police arrived in Afrin to monitor the ceasefire declared in the city.

In the east of Homs, terrorists of the IG (grouping banned in the Russian Federation) killed the colonel of the Syrian Arab Army (CAA) Luay Ali Rahiya. The militants who remained in the province of Homs put all their strength to prevent the advancement of government troops to Deir ez-Zor. Military experts believe that terrorist attacks should be expected in the area of ​​the Su-Suhne-Deir ez-Zor highway, where the IG managed to transfer a significant part of the forces from Al Mayadin and Abu Kemal, creating several defense lines.

In the morning, the Russian Aerospace Forces destroyed a jihad-mobile plant in Deir ez-Zor. In addition, the commander of the IG Abu Abdullah al-Tunis and 12 militants were eliminated. At the same time, the leaders of the IG began to strengthen the defense line of the occupied center of the province. In Deir ez-Zor and surrounding suburbs, new checkpoints are established. Militants also strengthen the protection of existing checkpoints. It became known that tribes from different territories of Syria were sent to the fronts of Deir ez-Zor. The people's militia is sent to the province to support the Syrian Arab Army (CAA) in the fight against the IG.

In the past few days in the province of Raqca there has been an increase in the number of IG terrorists. The radicals went on the counteroffensive and caused significant damage to the units of the SAR army. In the south of the village of Ghanim al-Ali militants detonated three bombs at the location of the CAA. As a result of the attacks killed 50 soldiers. Later it became known that ISIS seized the large Al-Jarayh oil field in the north-west of the province. The Syrian Army (CAA) was unable to seize the initiative from the militants and continued to retreat, allowing the radicals to establish control over the strategic territory.

The air forces of the Western coalition struck the alleged positions of IG terrorists in the Al-Haramiah district of the city of Rakka, but the intelligence of the alliance pilots was inaccurate, so the Syrian Democratic Forces (SDF) were hit. Under fire coalition killed 15 Kurds.

As a result of another attack by IS militants in the province of Hama on the location of the SAR army, the radicals managed to destroy a military truck. The incident occurred near the village of Al Castal al-Shimali in the vicinity of Akerbat. At the same time, the terrorists were able to redeploy two units from Akerbat occupied by government troops to Al Castal ash Shamali and Al Castal ad Janubi settlements. Such a measure is aimed at strengthening the positions of militants in those areas where it is necessary to prevent the advance of the Syrian army. Sources emphasize that IG fighters are forbidden to surrender. In case of failure, the Islamists should die on the battlefield. Civilians flee Akerbat, trying to get to the territories controlled by opposition groups.

The Syrian air force inflicted several blows on militant positions in the villages of Briget, Al-Kantara, As-Sathiyat and Al-Madagin to the west of Salamia (Hama province). Militants of the radical opposition launched a counterattack and struck several blows at the positions of the SAR army. During the fighting on the southern fronts of the province of Hama, the radicals killed more than 20 soldiers of the Syrian army.