The Soviet economy lost? Why do we still live by its fruits? 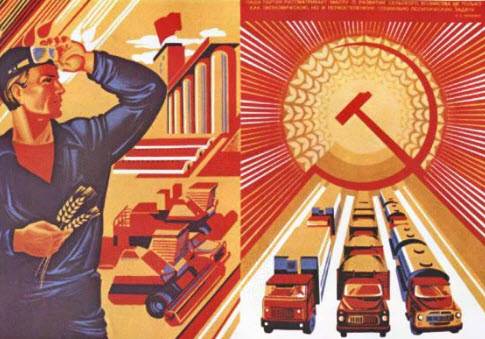 We often hear that the planned economy turned out to be insolvent, could not provide the country with goods, could not withstand competition from the market economies of western countries, led to the decline and then the destruction of the Soviet Union.

Someone thinks that there is nothing left of the Union, and decades of shock work of an entire people were wasted. But is it?

If you take a closer look, you can find that almost everything we use today is either left from the USSR in the most direct way, or obtained thanks to Soviet industry, which means that the planned economy, which many consider untenable.

Most of the population still lives in Soviet-built houses. And if Khrushchev gradually demolished, then the houses of Stalinist buildings will stand and stand, because the apartments in them are very much appreciated.

And modern houses built in the post-Soviet period are also partly of Soviet origin. Because almost all brick and cement plants, ZZHBI and metalworking plants that produce materials for modern homes - again built in the USSR.

Infrastructure, communications - also mainly from the Soviet government. Recently, asphalt was mainly shifted on the existing roads, and even then not at all. New roads are built mainly around Moscow, and in the rest of the regions roads are built a little and a little. On some roads, even the asphalt was not updated - and it is from Soviet times.

Most of the CHP, HPP and NPP, almost all administrative buildings are of Soviet construction. Ostankino and regional telecentres - again built in the USSR.

Almost all the large factories that still operate today were also built during the Soviet era. RusAL, MMK, Norilsk Nickel and many other giants, whose shares are now traded on exchanges, and products are exported - built in the Soviet period.

AvtoVAZ as a development bought from the Italians, but bought by the Soviet authorities and paid for with money earned by the Union. And built in the Soviet period. And until recently, the plant continued to produce Soviet models of Zhiguli. "Nine" and "ten" were Soviet developments. Only recently the Soviet models of the Zhiguli were finally replaced by new ones. Although the plant itself, production facilities and office buildings - still remained the same, Soviet-built.

GAZ - again built in the Soviet period, so all the Gazelles, which are produced today, are produced thanks to the same Soviet government, which once built a car factory.

Uralvagonzavod, shipyards, aircraft factories, design bureaus and everything else - built during the Soviet period. Even Armata is the completion of the development begun in the USSR.

Helicopter construction is one of the few high-tech industries in which Russia retains its leading position - again left from the USSR. Russia still produces Soviet-made helicopters and they are in demand. A new model of helicopters are created on the basis of the Soviet and in fact are their modernization.

Engines for launch vehicles developed in the Soviet design bureau.

Space launches are still carried out from Baikonur, the Soviet cosmodrome. The Eastern cannot yet fully replace Baikonur and whether it will ever be replaced is unknown.

Akademgorodok - one of the largest scientific centers not only in Russia, but also in the world - was built in the Soviet period. Skolkovo in comparison with Akademgorodok is a mere trifle. Add to this Zelenograd and many scientific institutes, laboratories and test sites throughout the country - almost all were built during the Soviet era.

Most of the offices today are located in the buildings of the former design institutes, which were again built in the USSR ...
And I have not listed it all yet!

So now say that nothing was left of the USSR and the 70 years of hard labor were gone in vain.

This 30 years of democracy were lost in vain, because in the last 30 years less was built than in the USSR it was built in one five-year plan. But more destroyed than during the Great Patriotic War.

Show me at least one large factory built in the post-Soviet period.

What has been built seriously over the past 25 years?

Vostochny Cosmodrome is a pale likeness of Baikonur, it’s not yet ready to accept the baton of the new cosmodrome, and it’s not known when it’s ready, therefore, it’s still premature to speak of it as a major project.

Skolkovo is generally a misunderstanding, a puzzling instead of science. In comparison with Akademgorodok - zilch. Regarding Rosnano, it is also unclear what is being done there - tangible results zero point horseradish tenths.

Rostec is simply the name of the corporation into which several Soviet plants related to the military industrial complex were assembled. Shvabe is a new name for the Lenin plant in Novosibirsk, where military optics have been made since Soviet times.

Olympic facilities in Sochi, please do not show - small wonder.

About the Zenit Arena, you can say about the same thing - for the money spent on construction, you could build a dozen similar stadiums, so there is nothing to be proud of.

We only do that we use the Soviet legacy, day after day.

Imagine for a second that the factories built during the Soviet period — Kamaz, GAZ, AvtoVAZ, MMK, Norilsk Nickel, Uralvagonzavod and all the others — have disappeared?

Imagine that Stalin's skyscrapers, Ostankino, former design institutes and other administrative buildings of the Soviet period have disappeared - what will remain? Moscow City and rare hypermarkets?

Imagine that the entire housing stock built during the Soviet period, as well as buildings built of brick, reinforced concrete and steel structures produced by plants left over from the USSR, has disappeared - what will remain? The Kremlin and St. Petersburg palaces? Peterhof? What else?

How many roads will remain, if you imagine that everything laid during the Soviet period suddenly disappeared?

If you mentally remove everything that was built during the Soviet period, on Soviet projects, by Soviet factories or from the materials produced by them, hardly any 5% of the entire economy will remain.


Every day we use what we have left of the Soviet Union, we simply do not notice it, we do not look closely, we do not think about it, we don’t attach importance to it.

Your TV works only because the Soviet government carried out electrification, built a CHP, hydro and nuclear power plants, power lines and telecentres, including Ostankino - the country's main television center.

Your house is warm for the same reason.

And your house was built either in the Soviet period, or from materials produced in the factories left over from the USSR.

Even the imported goods that you use today - computers, iPhones, iPads, televisions and everything else - and those purchased thanks to the USSR.

Almost all imported goods are bought for the currency derived from the export of oil and gas, and most of the oil and gas fields were developed during the Soviet period. Siberian deposits discovered by Soviet geologists. The gas pipeline, part of which is the Ukrainian gas transportation system, through which a significant part of gas is still supplied to Europe, was also laid during the Soviet era.

Do not develop the Soviet power of the Siberian fields - we would have remained without oil and gas after the division of the USSR.

Gazprom is the former Mingas privatized after the liquidation of the USSR. They just took and turned the ministry into one big corporation. And this corporation today provides half of the country's currency earnings, for which everything is bought - from cars to Chinese slippers.

Even that currency, which is not obtained from the export of gas and oil - still comes from the exploitation of the Soviet legacy - either Norilsk Nickel, or RusAL, or helicopter building, or launch vehicles.

And even this is not the end of the Soviet legacy.

We are still watching Soviet films. Most schools and universities also built in the Soviet period.

The best textbooks were written in Soviet times — students are still taught about them. Even in schools, teachers return to Soviet textbooks, because they don’t have a quality replacement.

In Novosibirsk, there is a network of butcher shops in Torgovaya Square - among sausages and sausages, the centerpiece is boiled sausage and milk sausages called “Then.” Why did the manufacturer choose this name and put it in a prominent place? Yes, because they buy! And they buy because they remember that boiled sausage in the USSR was delicious and consisted of meat.

The same situation in the line of ice cream - one of the most expensive and high-quality ice cream stylized under the Soviet.

Recently, I ran into an interesting case - I found a canned meat in a shop called “Made in the USSR”. The label is made in red and yellow colors, with a deliberate stylization of Soviet symbols. On top of a large red flag with a large inscription "made in the USSR."

At the same time the stew itself is made according to modern GOST, not even Soviet. But it is stylized under the Soviet production, very deliberately. There is a marketing ploy to attract a buyer. But why did the manufacturer decide to stylize their products in this way, in this way to attract a buyer? Yes, for the same reason - high-quality Soviet products remained in people's memory.

So much for the USSR, of which, according to some, nothing is left!

We not only continue to use the infrastructure and housing stock left over from the USSR, factories and entire industries such as astronautics, energy and helicopter construction. But even we return to the Soviet GOSTs and the Soviet stylistics, because the Soviet GOSTs ensure quality, and the Soviet style evokes memories of high-quality products and attracts attention.
Everything that we have been doing for the last 30 years is simply exploiting the Soviet legacy, repairing and updating in some places, and destroying and inundating in some places.

Even those who left Russia, settled in London, bought a yacht, surrounded themselves with European goods - they also live at the expense of the Soviet legacy. Because their capital is the result of the privatization and sale of Soviet property.

But why then did not the USSR become, if the planned economy was so strong and allowed to build all of the above?
Yes, and therefore was not ...

The USSR eliminated the party elite, guided by personal interests, in order to exchange state ownership of personal property and property in Russia for property in Europe.

The party elite decided that it was enough to build already, it's time to take advantage of the built - and for personal gain.

That is why the USSR did not become so much built that it became possible to sit on the fifth point and live in clover, squandering a rich legacy.

Of course, it didn’t happen to everyone to live happily ever after, but only the most nimble, who managed to grab more. At the same time, Gorbachev, Yeltsin, Chubais, Gaidar and others who destroyed the USSR were the Soviet party and Komsomol elite, which means they were also made in the USSR.

Even the elimination of the USSR was made in the USSR!

And Putin, without whom some cannot imagine the future of Russia, was also once made in the USSR, like the entire Resource Federation, which matured in the depths of the Soviet Union in fertile oil and gas fields discovered by Soviet geologists and in the pipeline infrastructure built during the Soviet period .