August 28 2017
39
The Missile Defense Agency (MDA) of the United States is looking for a drone capable of destroying ballistic missiles with a laser. According to the portal flightglobal.com, Northrop Grumman plans to upgrade its unmanned aerial vehicle (UAV) RQ-4 Global Hawk to meet the stated requirements of the MDA, reports "Warspot"

In June of this year, the US Missile Defense Agency issued a request for information to create a HALE-type UAV (high-altitude, long-endurance) capable of carrying a combat laser. The request indicated that the drone must be able to rise to a height of more than 19 km and carry payloads from 2,3 to 5,7 tons. The military command believes that the drone equipped with a certain power laser can destroy intercontinental ballistic missiles in the so-called acceleration phase. 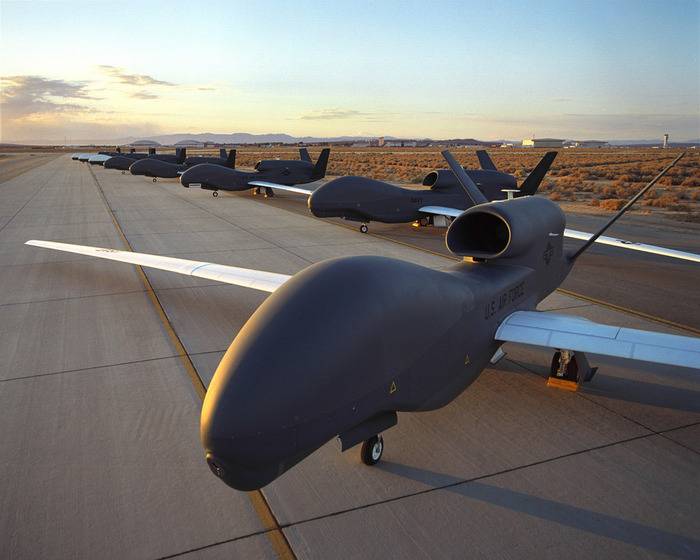 The MDA request goes far beyond the capabilities for which the Global Hawk was designed. We are ready to quickly upgrade our drone to the minimum requirements of the missile defense agency, and then work on new modifications that will fully satisfy the request of the MDA
- said Mike Lyons, Global Hawk Program Manager at Northrop Grumman.

According to the technical documentation, the RQ-4 Global Hawk UAV can climb to a height of up to 18 km and carry up to 1,3 t of payload. But, according to Mike Lyons, part of the equipment of the drone has not changed since the 90-s, when it was developed, and if you replace it, you can significantly increase the payload.

For decades, the US Missile Defense Agency has been ordering the development of aircraft capable of carrying laser weapons and destroying ballistic missiles. It is known that even in 80, the first prototypes of this type were tested. weapons, and in 2014, the program to build the Boeing YAL-1 aircraft was closed, which successfully destroyed the missiles during testing, but due to the reduction of the military budget, its development was discontinued. But in recent years, the US Department of Defense has once again actively financed programs to create laser weapons and MDA is trying to recreate programs that were previously closed on the basis of a drone.