Along the valley of the river Dashigouhe 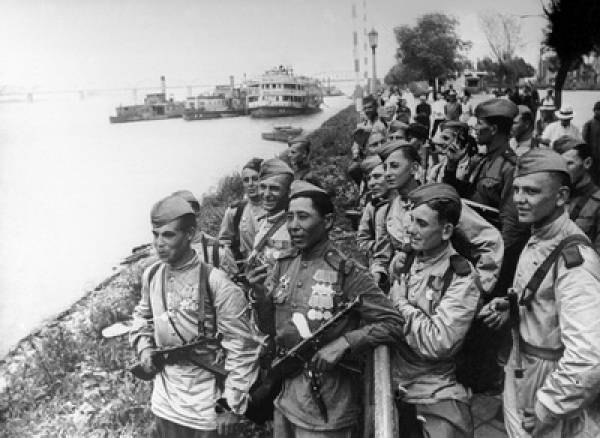 August 15 1945 Commander 5 Army 1 of the Far Eastern Front, Colonel-General N.I. Krylov, whose troops were breaking through to Mudanjiang, decided to bring the 84 separate cavalry division into battle, which came under 11 August 1945 in the year and arrived in the Miagou region (4 km southeast of Mulina) by the end of the previous day.

The commander of the 84 th separate cavalry division, Major General Nikolai Dedeoglu, received the task of making a flank march, moving along the Mulin-Dashigouhe-Xiaoshitouhe route along the Dashigouhe river valley to the south-west and then Ninganom, to cross the Liao Helyn ridge and reach the level of 92 o. , providing the left flank of the 17 Army, and establish the presence of units of the neighboring 1945 Army at the Taipinglin-Dadyantszy border.

The area in which the divisions had to operate, up to the line of Xiaoshitogo, was a narrow stony valley of a small mountain river Dashigouhe, on both sides of which steep taiga hills stretch along the path repeatedly crossing this river. Then the path disappears, and a continuous virgin taiga begins, a marsh turning into a continuous quagmire.

There, the division had to pave the column way to continue the movement, which was not foreseen when setting the task for it - the decision was made on obsolete maps (shooting of 1904 – 1906). As it turned out, divisional cavalrymen had to build 60 km of column tracks, of which 40 km of continuous gati through the swamp and taiga. This made it impossible to complete the task set by the cavalrymen.

However, starting on the morning of August 16, the 84-th Separate Cavalry Division split the order of the 129 Japanese Infantry Division, destroying the enemy groups that were hindering its advancement, and forced the opposing Japanese units to withdraw from their positions, which contributed to the overall tasks facing the 5-th army, and provided its left flank.

With the beginning of the movement of the division to the left along the route Mulin - Quannanhe - Changshanlin - Yangtze - Taipinglin - Dadyantszy, a mobile side detachment of Captain Andreev was sent. He was allocated from the regimental school of the 198th cavalry regiment (80 people in 7 cars with a walkie-talkie) and 5 tanks 265th tank regiment and had the task to establish communications with the neighboring 25th army and guard the left flank of the division.

For the material support of the 84-th separate cavalry division, a “fly” was sent, headed by the officer of the 5-army headquarters, Major Mahmut Gareev.

Following the route, the detachment, destroying the Japanese in the Changshanlin area and breaking the debris on the road, by 17.00 17 August reached the Yangtze settlement, to the south of which, in a deep hollow, engaged enemy forces (with infantry battalion with artillery and mortar shells). The Soviet division launched an offensive and by its decisive actions forced the enemy to withdraw. As a result, more 300 Japanese soldiers and officers were killed. Our squad lost 14 people killed and missing, 3 tank and all 7 vehicles.

During the interrogation of a captured Japanese officer, it was established that on the route of the detachment the infantry regiment of the 129 Infantry Division occupies the defense. Due to the obvious inability to perform the previous task, the squad received a new one: to withdraw to the main forces of the division. At nightfall, the squad began to move in the direction of Mulin and 18 August 1945, joined the division.

By 19 August 84-I separate cavalry divisions, paving the way through the taiga, destroying individual groups of the enemy, passed about half the way determined by the order to make a flank march. At the same time, during the last two days, parts of the division did not have food and fodder.

By that time, the troops of the 5 Army had captured the city of Mudanjiang, and due to the changed situation, the army commander ordered the division to return to Moulin. For the material support of the 84-th separate cavalry division, a “fly” was sent, headed by an officer of the 5-Army headquarters, Major Makhmut Gareev, who, despite the active opposition of the enemy, delivered cavalry food and fodder in a timely manner. In this way, she contributed to the accomplishment of the task by the division, and 22 August 1945, the 84-I separate cavalry division entered the Mulina area.