Feat Zinoviy Kolobanova. Hero did not give the Golden Star

August 25 2017
63
During the Great Patriotic War, many Soviet people demonstrated the highest courage and bravery, fighting the Nazi invaders. For feats committed during the Great Patriotic War, 11 thousands of 657 people (of whom 3051 posthumously) were awarded the high title of Hero of the Soviet Union. However, there are "forgotten" heroes. People whose front-line path, it seemed, could only lead them to the title of Hero of the Soviet Union, did not receive a high award. No, the people have not forgotten about their exploits, but for some reason the powers that be considered that they should not be given the title Hero of the Soviet Union (and then Hero of Russia). So did not become the Hero of the Soviet Union, Senior Lieutenant Alexei Berest, who took the most direct part in hoisting the Red Banner on the Berlin Reichstag. Another real hero, who was undeservedly bypassed the reward - Zinoviy Kolobanov.


It is about him the poet Alexander Gitovich will then write: 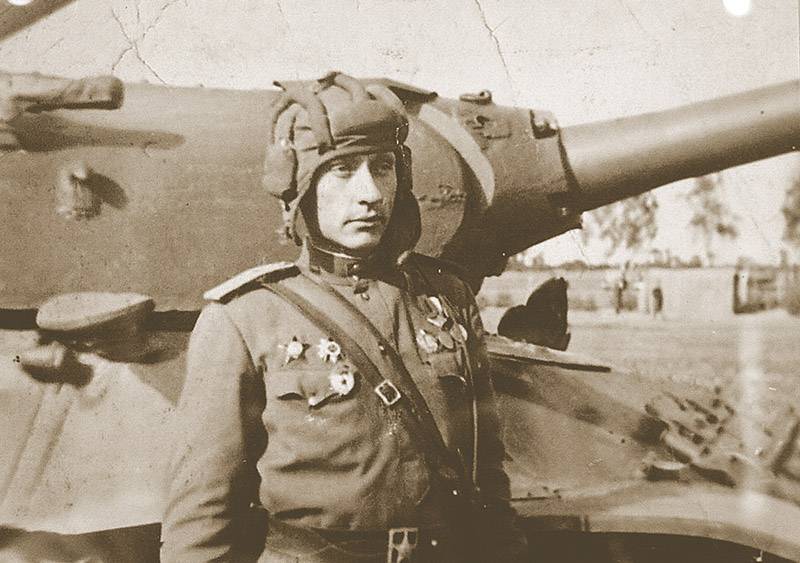 On August 8, 1941, Army Group North began an attack on the city of Leningrad. The units and formations of the Red Army that defended Soviet territory from the aggressor, despite the dedication of the personnel, were retreating. In the area of ​​Krasnogvardeisk, as Gatchina was then called, the defense was held by the soldiers of the 1st tank divisions under the command of Major General Viktor Ilyich Baranov. They had to restrain the onslaught of a stubbornly advancing and superior enemy. On August 19, 1941, Major General Viktor Baranov ordered the blocking of the three roads leading to Krasnogvardeisk from Luga, Volosov, and Kingisepp. This task was entrusted to the 3rd Panzer Company of the 1st Panzer Regiment of the 1st Panzer Division, commanded by Senior Lieutenant Zinovy ​​Kolobanov. Armed with the 3rd tank company, which was commanded by Kolobanov, were heavy tanks KV-1, which could quite resist the Wehrmacht tanks. But armament is armament, but about the identity of the company commander, whose feat forever entered history Great Patriotic War, it is worth to say special. By the time the Great Patriotic War began, he was already an experienced officer who had gone through the Soviet-Finnish war.

Zinoviy Grigorievich Kolobanov was born on December 25 on 1910 in the Vladimir province in the village of Arefino, Murom district (now it is the territory of the Nizhny Novgorod region). Father Zinovia Gregory died during the Civil War. Mother raised three children alone, then moved to the village of Big Zagarino. The beginning of Zinoviy Kolobanov’s life journey was quite common for a rural guy of that time. He graduated from eight classes of secondary school and went to study at the Gorky Industrial Technical School. At that time, Stalin’s industrialization was in full swing and the country needed skilled workers and engineering personnel, therefore such professions were always prestigious and in demand.

16 February 1933, the 22-year-old Kolobanov, who studied in the third year of the technical school, was drafted into the Workers 'and Peasants' Red Army. As a literate guy, he was sent to the regimental school of the 49 Infantry Regiment of the 70 Infantry Division, and then to the Orlovsky Armored School named after MV Frunze. So Zinovy ​​Kolobanov became a personnel soldier. In May 1936, he graduated from the military school with the rank of lieutenant, with honors, and began serving as tank commander in the 3-th separate tank battalion of the 2-th tank brigade of the Leningrad Military District. In 1938, Mr. Kolobanov graduated from the Advanced Training Courses for commanders and then served as Assistant Commander of Ammunition in the 210 Rifle Regiment of the 70 Rifle Division. Then, from July 31 1938 to November 16 1938, Mr. Zinovy ​​Kolobanov served as a platoon commander of the 6-th separate tank brigade, and then was appointed commander of a tank company in the same brigade. 25 November 1939 of the year Kolobanov was transferred by the commander of a tank company to the 1 th light tank brigade, which was deployed on the Karelian Isthmus. The Soviet-Finnish war was approaching, and the formations of the Leningrad Military District were to play a very important role in it.

When the Great Patriotic War began, Senior Lieutenant Kolobanov was transferred to the 1 Tank Division as a commander of a heavy tank company KV-1. Zinovy ​​Kolobanov himself recalled that he was called up to the division from the reserve and, taking into account the experience of the Soviet-Finnish war, he was immediately appointed the company commander. 14 August 1941, Zinoviy Kolobanov participated in the battle near the village of Ivanovsky on the Luga River. His crew destroyed the enemy’s tank and artillery. However, the most important battle in the life of Zinoviy Grigorievich was still ahead. 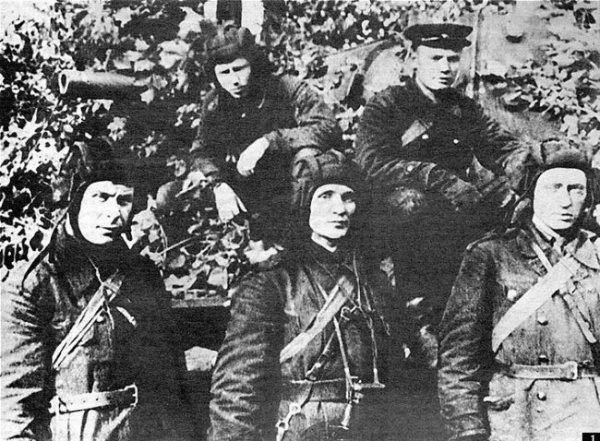 Two tanks from the Kolobanov company were sent by the commander to the road from the direction of Luga, two tanks - to the Kingisepp direction. The commander’s tank of the company took up a position on the coastal road, which allowed controlling at once two directions of possible movements of enemy tanks.

On the Luga direction 20 of August, the crews of tanks lieutenant M.I. Evdokimenko and junior lieutenant I.A. Degtyarya entered into battle with the avant-garde German tank column and destroyed five tanks and three armored personnel carriers. Kolobanov missed the Nazis on motorcycles that drove along the road in the direction of the Voskovitsa state farm, since his task was to block the movement of the enemy’s tank column. Finally, the German light tanks of the 6 Tank Division also appeared (although there are other versions - that the tanks belonged to either the 1 th or 8 th Panzer Division). 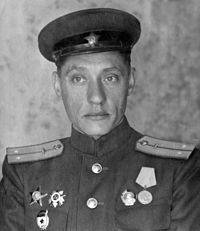 After waiting, Kolobanov gave the order to open fire. The very first shots were hit by three head tanks of the German column, which stood up, blocking the way for the rest of the tanks. Then the Soviet tank hit the tail, and then the center of the German column. Accurate hits were made possible by the actions of Senior Sergeant Andrei Usov (in the photo he is in uniform of a lieutenant, because then he rose to this rank) - an experienced artilleryman who fought in the Soviet-Polish and Soviet-Finnish wars and served previously as assistant platoon commander in artillery. regiment, and then trained by the commander of a heavy tank gun.


After the shots of Usov, panic began in the enemy convoy. Considering that the road passed through a swampy field, the tanks that had pulled onto the side of the road fell into the swamp, where they got stuck. In the ignited tanks exploded ammunition. Within thirty minutes of the battle, Kolobanov’s tank was able to knock out all the enemy's 22 tanks, using up 98 armor-piercing shells. The 114 of German shells hit the Soviet tank itself, but its armor really seemed strong. All in all, a company under the command of Kolobanova has lined 43 enemy tanks - 22 tank on account of the crew of Lieutenant Kolobanova, 8 tanks - on account of the crew of the second lieutenant Sergeeva, 5 tanks knocked out the crew of Lieutenant Evdokimenko, 4 tank - the crew of the second lieutenant Degtyar and even 4 tank - The crew of Lieutenant Lastochkina. Already after the battle, the company’s tank crews destroyed the enemy’s artillery battery, one passenger car, and about two infantry companies. Such a battle did not yet know the history of the Soviet and even world tank forces.

It would seem that the incredible victory of the tankers over the Nazis in the battle on August 20, 1941 practically guaranteed Senior Lieutenant Kolobanov the title of Hero of the Soviet Union. Indeed, already in September 1941, Colonel Dmitry Pogodin, who commanded the 1st Tank Regiment of the 1st Tank Division, presented all the crew members of the tank of Senior Lieutenant Zinovy ​​Kolobanov to the rank of Hero of the Soviet Union. Dmitry Pogodin, a member of the Central Committee of the Communist Party of the Byelorussian SSR and a veteran of the Spanish Civil War, was himself the first tanker to receive the title of Hero of the Soviet Union on December 31, 1936 - for his valor and courage shown in battles in Spain. As a real military commander, he perfectly understood the cost of Kolobanov's feat. The submission was also signed by the division commander, Major General Viktor Baranov, who by that time was also a Hero of the Soviet Union himself, having received a high award for battles with Finnish troops during the Soviet-Finnish war. But neither senior Kolobanov nor other members of his combat crew managed to become a Hero of the Soviet Union. At the headquarters of the Leningrad Front, the idea of ​​giving Kolobanov and his fighters the high ranks of Heroes of the Soviet Union was “hacked to death”. The commander of the crew and the company of senior lieutenant Kolobanov was awarded the Order of the Red Banner, the commander of the gun senior sergeant Usov was awarded the Order of Lenin, the senior driver-mechanic foreman Nikiforov was awarded the Order of the Red Banner, the gunner-radio operator senior sergeant Kiselkov and the junior driver-mechanic received the Red Army order Rodnikov Krasny ...

Like other Soviet soldiers who accomplished real feats, but for some reason did not go through the “filter” of the staff officers and deputy politicians, Zinovy ​​Kolobanov continued to fight. He defended the approaches to Krasnogvardeysk, but on September 15 1941 was seriously wounded in the defense of the city of Pushkin, receiving a fragmentation of the head and spine and contusion of the brain and spinal cord. He spent almost the entire war in hospitals in Sverdlovsk - the injuries were too serious. Despite this, on May 31 of the year 1942, Kolobanov was given the rank of captain, and in March of the year 1945, after signing out, he immediately asked to join the army. 10 July 1945, after the end of the war, Kolobanov was appointed deputy commander of the 69 tank battalion of the 14 mechanized regiment of the 12 mechanized division of the 5 guards tank army in the Baranovichi military district. 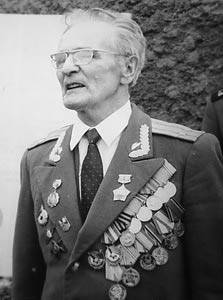 It turns out that the amazing feat of Kolobanov’s crew was never appreciated. Even years later, the authorities did not agree to assign the title Hero of the Soviet Union, albeit belatedly, to the legendary tank man. The authorities of post-Soviet Russia also refused to do this. When the St. Petersburg branch of the Russian Military Historical Society (RVIO) collected more than 100 thousands of signatures in support of assigning Kolobanov the title of Hero of the Soviet Union, it was still denied. And it is not even surprising. For example, the same story happened with Alexei Berest. However, in the eyes of the people, both Zinovy ​​Kolobanov, and his colleagues on the crew of the tank, and Alexei Berest, and other front-line soldiers who have accomplished many feats, still remain true Heroes with a capital letter, regardless of the opinion of the officials.