The Arab Spring comes to Morocco. Islamists waiting for a new chance

August 24 2017
28
In another Arab country, Morocco, mass unrest is breaking out, hundreds of thousands of people are in favor of political reforms that run counter to the course of the hereditary ruler, King Muhammad VI, writes RIA News. 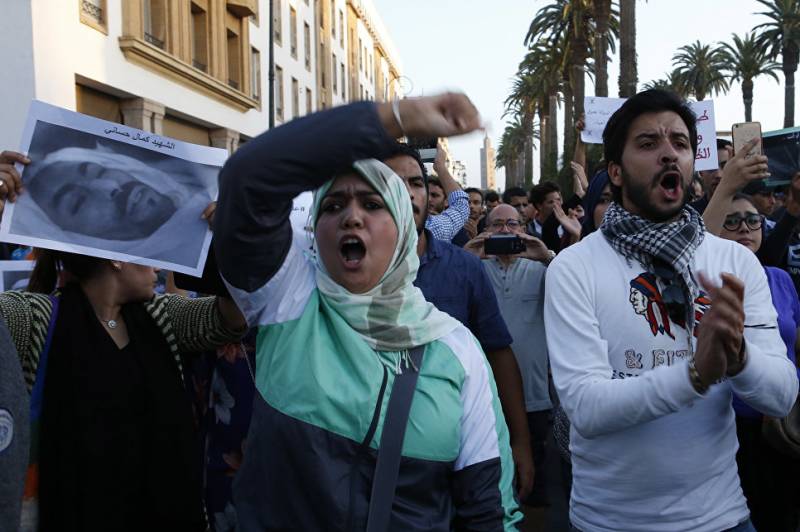 Unrest continuing the tradition of the Arab Spring follows the logic of the protests in Tunisia, Egypt, Libya, and Syria on the 2011 year. The protesters began by saying that they were indignant at the murder of fish merchant Mukhsin Fikri. Now they want to change power.

Against the background of incessant mass demonstrations in Morocco (and in neighboring Tunisia), more than a thousand former IG fighters (a grouping banned in the Russian Federation) have returned, able to proceed to action if the regime falls,
Says the article.

History Fikri, a fisherman who tried to recover the catch he had confiscated from him and who died (according to the criminal negligence of the police) in the trash compressor of one of the cars, broke out last fall. The tragic incident revealed the tension that had long ripened between law enforcement officers and residents of the coastal province of Reef.

The Moroccan protests revealed leaders, one of them - 25-year-old Imad el-Attabi, who turned out to be a symbol of the movement against his will. On July 20, during a protest, El-Attabi received a blow from a policeman, fell into a coma, without leaving which he died. Protesters call the deceased a martyr of his movement, who received the name “Hirak” in the Arab press.

“The piquant aspect of the Moroccan protests is the question of the right to grow cannabis. Historically, the reef province, where the unrest began, is known as the site of cultivation of this plant. For the legalization of a soft drug in the Reef, everyone stands, including local authorities loyal to the king. However, Muhammad VI shows his principles and refuses to accept the decision expected by local residents. After the death of Fikri and Attabi spawned a mass movement, the protesters, in addition to easing the political regime, also demand to stop the persecution of farmers who export cannabis to Europe ", - writes the edition.

As a neighboring country to the EU, Morocco holds an important part of this delicate market in the European community, some countries of which officially legalized herbal drug. By the way, the farmers of the Reef are not embarrassed that the cultivation of cannabis is in conflict with Islamic laws.

The official point of view of the authorities of Morocco at the demonstration is that they reflect only the point of view of one region and constitute a separatist movement. Indeed, the reef is populated to a large extent by ethnic Berbers. However, such an interpretation of the Moroccan protests is short-sighted: “the further, the more they spread throughout the kingdom, including the capital Rabat and the largest port of Casablanca,” the author notes.

Such a turn of events is particularly dangerous in Morocco, a country in which Islamist appeals find a response. The largest terrorist attack in Europe of the XXI century - Madrid, 2004, was committed by Moroccans. The recent massacre in Barcelona and the attack on passersby in Finland are also associated with people from the kingdom.

According to European press reports, it is precisely in North Africa that thousands of jihadists are sent, who fought for IS, but realized the defeat of the “caliphate”.

“The involvement of these people in Moroccan protests can give events an unexpected and extremely negative turn: Morocco can become a new stronghold of the IG,” concludes the publication.