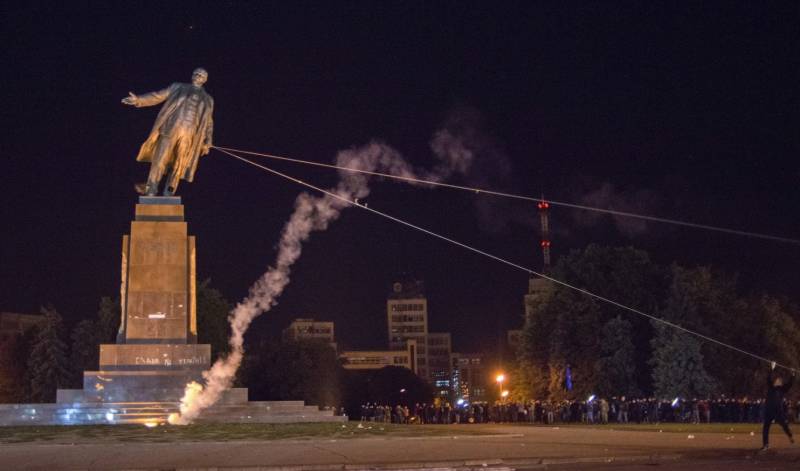 It turns out it's contagious ...

Last week in Ukraine, they reported on a big “Peremog”: now there is not a single monument left to V. I. Lenin. This was stated by the director of the so-called "Ukrainian Institute of National Memory" Vladimir Vyatrovich. According to him, 2 389 memorials were demolished, of which 1 320 are monuments to Lenin.

«According to our information, Lenin is no longer in the cities - on the territory that is controlled by Ukraine. Perhaps they remained in the countryside and in the territory of enterprises"Said Vyatrovich.

Well, not everyone, even a convinced, neo-Nazi, will go to demonstrate his hateful beliefs for a real war. There you can get a bullet from the defenders of Donbass. There is a light option for those who have a small intestine - to heroically fight monuments. Especially - in conditions when dissent in the country is suppressed, and those who would dare to go out and protest against vandalism, face considerable prison sentences.

At the same time, the authorities have something to do: not to raise salaries and pensions, not to solve the real problems of citizens who, after the “Maidan”, have accumulated “over the roof”. It is easier to dismantle the monuments and report on the reason for pride. It is not surprising that the victory in this unequal battle was left for the “de-communizers”.

It is hardly surprising that the neighboring Poland “got infected”. In terms of unconsciousness, rabid Russophobia and neglect stories these two countries stand each other and even constantly compete with each other.

However, who would have expected that the Maidan plague would fly across the ocean and go straight to the center of “civilization” and “democracy” - to America?

Before this whole mess, few knew that in Seattle there is a monument to the leader of the world proletariat. It turns out that such a monument exists. But he is in private ownership - he is owned by the family of Lewis Carpenter, who at one time brought it from Slovakia. The monument is already 20 years old. It happened that some vandals doused him with paint. Now the statue had more powerful enemies.

The mayor of Seattle, Ed Murray, equated Ilyich with the Confederates (which, of course, is contrary to common sense). And he demanded that both him and the Confederates be removed - in his words, this "symbols of hate, racism and violence». Although Lenin with his ideology does not fit with racism.

In the post-Soviet space - for example, in the same Ukraine - it happened many times that people were killed when the monument was destroyed: either as a result of clashes of vandals and defenders, or - during the demolition itself. Now in the American Charlottesville, as a result of the struggle for the monument to General Robert Lee, an 32-year-old woman died and another two dozen people were injured. It would be better if no one touched the story ...

But the insidious virus, it would seem, came straight from Kiev Maidan ... Or maybe just the opposite?

We just celebrated the 26 anniversary of the events, as a result of which the history of Russia and all the Republics that were part of the Soviet Union abruptly changed. Then the virus of vandalism came to our land, and one of the symbols of the victorious "democracy" was the orphaned Dzerzhinsky Square in Moscow. The one that today is called Lubyanka and where 26 has no monument for years ...

It was only the “first swallow”. After the crowd dealt with the monument to Dzerzhinsky, throughout the post-Soviet space, including Russia, a wave of struggle with Soviet history and its symbols swept.

There is no need to prove once again that the events of 1991 of the year did not just flare up - the United States and its allies attached their long hands to them. So, the virus that was sown 26 years ago by Washington in Moscow, made a kind of whirlwind and returned - to the place where no one was waiting for it.

And now he got not only to the Confederates and even not only to the distressful monument to Ilyich, but even to Columbus. Monuments to the discoverer of America today were under attack. One of them, located in Baltimore, is already damaged - it was done under the slogans of "combating racism." And the mayor of New York, Bill de Blasio intends to seriously consider dismantling the monument to Columbus due to the fact that he is “an ambiguous figure” (as if all the other memorials are put to “unequivocal” personalities!)

Sculptures that have stood for many years, have to "take the rap" for the sins of living politicians. However, a rhetorical question arises: if in the United States today they relate to their own history, how can they relate to the history of other countries?

But we see this attitude almost every day - in one place, then in another corner of the world, where not only the virus of vandalism spreads, but also the more terrible virus of war, which destroys monuments and living people.