August 26 2017
16
As you know, 6 February 1922 in the US capital ended an international conference on the limitation of maritime weapons, which resulted in the "Washington maritime agreement 1922 of the year." According to one of the provisions of the document, from the structure of five fleets, including the American one, it was supposed to exclude a number of battleships so that the total tonnage of ships of this class would be within the limits agreed upon by the agreement. In particular, the Americans had to immediately disable and ship 13 battleships for scrapping: six types of "Connecticut", 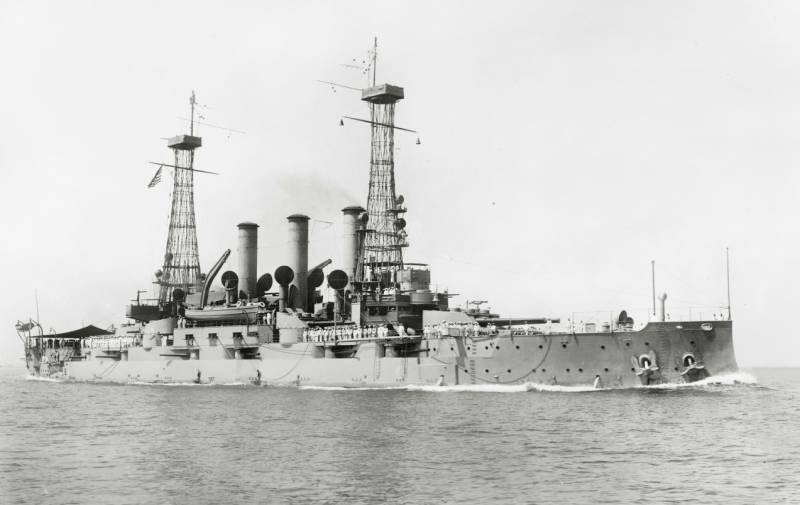 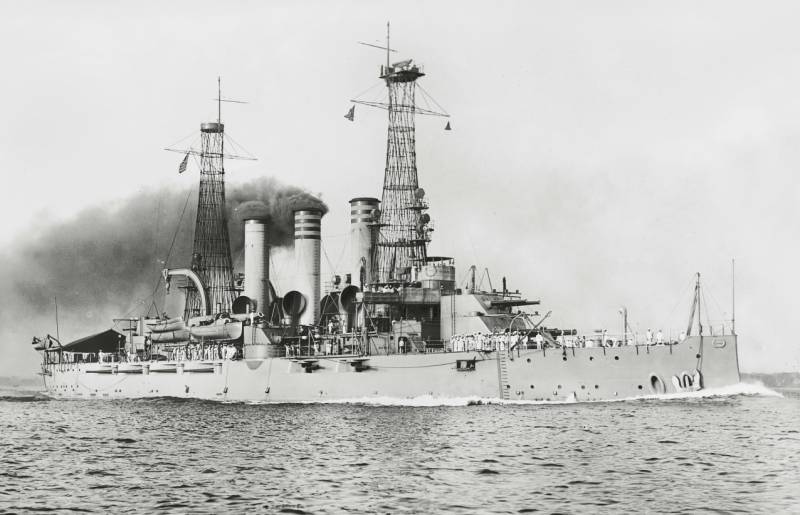 and two types of "Maine" 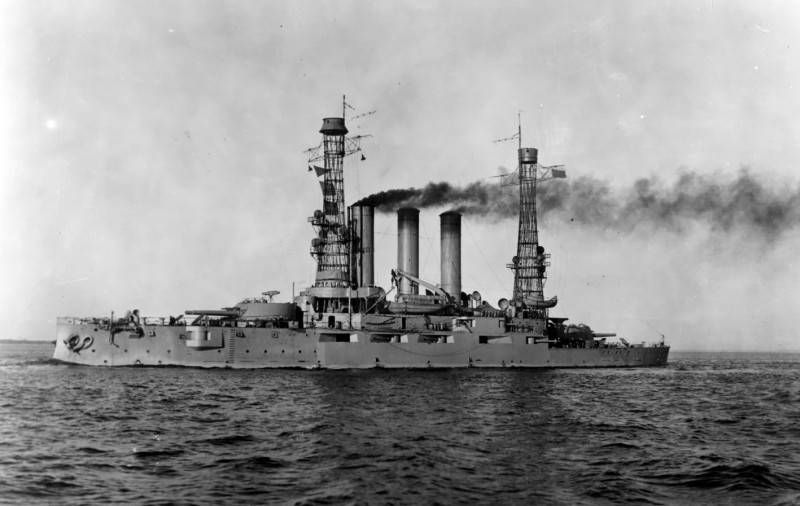 In this regard, Republican Senator from Maryland D. France (Joseph Irwin France) 5 of July of the same year submitted a bill to the US Congress, according to which the president of the country received the right to transfer the ships designated, under the Washington Agreement, to the Polish-Lithuanian Commonwealth. to write off.

In Poland, the 13 July 1922 was announced about the initiative of the US senator when the Second Division of the General Staff (Oddział II Sztabu General ne nego) received a telegram from Washington from the Polish military attache Major K. Mach (KazimierzMach) with a request to send an immediate the answer to the availability of the necessary means for the delivery of ships to Gdynia (Gdynia).

The report from Mach caused a stir in the Ministry of Military Affairs (Ministerstwo Spraw Wojskowych) and the Department of Naval Affairs (Departament dla Spraw Morskich), organizationally subordinate to him. The very next day, a letter (L.2310 / 22 Tjn. Pln.) Was received from the head of the staff addressed to the head of the Ministry of Military Affairs fleet, Commander C. Petelenz (Czesław Karol Petelenz), who at that time was the deputy head of the Polish Navy, Vice Admiral Kazimierz Porębski, aka Kazimir Adolfovich Porebsky, the last position in the Russian imperial fleet - the head of the cruiser crew of the sea cruisers rank of rear admiral). The letter presented the following arguments in favor of accepting, if received, the Americans' proposal for the transfer of ships of the line to Poland free of charge.

First, in accordance with the latest proposal of the British members of the Disarmament Commission in Paris, the principle of limiting naval forces should be extended to the rest of the member states of the League of Nations in such a way that newly built ships have the same combat value as previous similar ships. class, while would not be intended to increase the fleet, but only to replace the decommissioned. Before 1930, all countries undertake not to sell, donate or build for other countries warships with a displacement of more than 10 000 tons. If this proposal is approved at the next meeting scheduled for September 4 1922, the young Polish fleet will be deprived of practical possibilities warships with a displacement of more than 10 000 t.

Secondly, Petelenz wrote, referring to the words of the Deputy Chief of the General Staff, Brigadier General J. Rybak (Józef Rybak, the last post in the Austro-Hungarian Army - Chief of Staff of the 59 Infantry Division with the rank of Major), the defense needs of the state demanded the construction of a number of fortresses along Pomor corridor to prevent enemy invasion from the sea. Since American battleships were armed with 152-305 mm caliber guns, entering them into the Polish Navy eliminated the need to build expensive coastal fortifications, since the battleships could be used as floating coastal batteries.

At the same time, General Rybak noted that the acquisition of even two such ships would require an increase in the budget and personnel of the fleet more than twice. In conclusion, Commander Pelelentz listed several proposals. The Polish government is interested in the adoption of the draft law submitted by Congress, and if this happens, a naval officer and engineer should be sent to America to establish contact with the government (Federal Government of the United States) and the Department of the Navy of the United States for further joint development of a program for the transfer of battleships and estimates of estimated costs. Since the adoption of the fleet and the maintenance of the six battleships will be too complex and financially burdensome for Poland, it makes sense to donate two of them to Yugoslavia and Romania in exchange for any concessions to gain political, military and economic benefits.

As an addendum to the report, an approximate calculation was made of the cost of delivering one battleship of the Rhode Island type from New York to Gdansk. The calculation was based on the assumption that the ship for 400 running hours will cover a distance of about 4 000 miles with an average speed of 10-11 nodes. Fuel consumption should be about 5 tons per hour.

Technical expenses (2 500 tons of coal, other consumables, water and similar items, machine team salaries) - 25 000,00 USD. Delivery officers and lower ranks in the US - 50 000,00 USD. The maintenance of the crew of the ship in America for one month - 96 000,00 USD. Monthly maintenance of the crew during the transition - 84 000,00 USD. The total cost of delivering one battleship to Poland was supposed to be at least 255 000,00 USD, which then was equivalent to 1 230 000 000,00 Polish brands. At the same time, according to the Budget Estimate, the regular and extraordinary (new shipbuilding) expenses of the Polish Navy for 1923 were planned in the amount of 22 245 000 000,00 Polish marks, which was equivalent to 4 600 000,00 USD. Thus, only on the delivery of two battleships, without the inevitable subsequent repair work and installation of additional equipment, it would be necessary to spend more than 11% of the annual budget of the navy.

The solution of practical issues related to the inclusion of American battleships in the fleet depended on the Polish Council of Ministers. 14 July 1922 Minister of Military Affairs Divisional General K. Sosnovski (Kazimierz Sosnkowski - former colonel of the Austro-Hungarian army, commander of the 1 Brigade of the Polish Legions, which was a part of the imperial and royal army) informed the Council of Ministers about the transfer to Poland as a gift. five, as he mistakenly stated, cruisers. Contrary to the resistance of the Minister of Finance Z. Yastrzhembsky (Zygmunt Jastrzębski), it was decided to accept the gift of the United States, and to recommend the Polish embassy in Washington to hold part of the funds necessary for the delivery of ships to Poland in the case of a positive decision of the Senate.

The next day, in a reply telegram to the military attache, Major K. Mach, it was reported that the Council of Ministers of the country would agree, on admission, to the American proposal.

However, four days later, the secret report No.1014 / T sent by the adviser to the Polish embassy in Washington, M. Kvapiszewski (Michał Kwapiszewski), dispelled all illusions. As Kvapishevsky clarified, the request of Senator Frans concerned the assignment of powers to the president for the transfer of battleships in the event that this does not conflict with the provisions of the Washington Agreement. However, Article XVIII of the Agreement prohibited the donation, sale or any other form of transfer of warships to third countries. Thus, the transfer of Doddurnautes to Poland would be illegal, therefore, the Frans bill for legal reasons initially had no chance of adoption.

According to Kvapiszewski confidential information, the prospects for re-election of Senator France (Maryland) are vague. Hence, we can assume that Senator France, through unofficial channels, received information about the upcoming sale for scrapping of battleships, due to uncertain prospects for re-election in the upcoming elections, decided to win over the additional votes of Poles living in Maryland.

According to the US Historical Centers Browser for 1920, the population of the state of Maryland, according to a census conducted in the same 1920 year, was 1 449 661 people. At the same time, about 11% out of more than 862 000 white citizens who have the right to vote belonged to national minorities. The largest group of immigrants were people from Russia (24 791 people), followed by the Germans (22 032 people), Poles (12 061, including Baltimore - 11 109 people) and Italians (9 543 people). Thus, a noble at first glance, the gesture of Senator Frans was actually a political game that had no chance of success.

But история with the transfer of American battleships to Poland, despite an explanation from the adviser to the Polish embassy, ​​healed his own life.

A month later, 18 August 1922, Deputy Chief of the General Military Control (Wojskowa Kontrola Generalna) Lieutenant Colonel Jan Kutsel (Jan Kuciel - former lieutenant of the 30 Infantry Regiment of the Austro-Hungarian Army) secret letter (L.1710 / 22 WBT), a secret letter (L.24 / WNT) WBT)) The Administration of the Army (Administracja Armii is an institution that is engaged in meeting the material needs of the army) should not the quartermaster service, as part of minimizing the cost of delivering battleships to Poland, consider placing onboard commercial cargo on board ships. In a response letter from August 11944 (L.XNUMX), divisional general A. Osinski (Aleksander Osiński, aka Osinsky Alexander Antonovich), the last post in the Russian imperial army, commander of an infantry division with the rank of major general, replied that armadillos, the case is closed.

The case of a possible donation to Poland of six (according to five other data) battleships became possible thanks to the memories of Wladyslaw Kosianowski, who served as a commander of the ORP Toruń monitor during the described period on the Pinsk Flotilla (Flotylla Pińska) 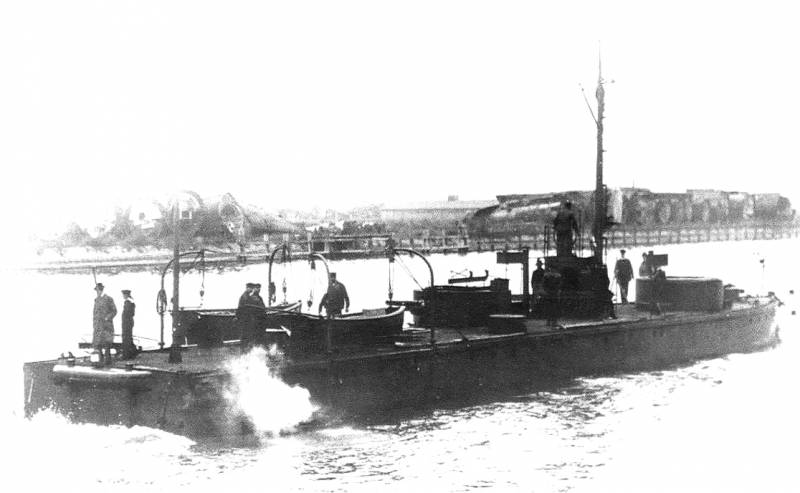