Ambush and victory of submarine guerrillas

August 27 2017
11
Independently functioning machinery, or, more simply, robots are gradually being introduced into all spheres of life. And since progressive innovations are used primarily in the military field, then such a promising type of water transport, as underwater gliders, they are gliders, immediately bought patrons for their epaulets.


Information on the tactical and technical characteristics of such products that fall into the media, stingy. However, domestic glider builders have nothing to be proud of. Unless the realization that the theoretical calculations of the underwater movement of gliders due to the alternating changes in the residual buoyancy were obtained by our scientists almost simultaneously with foreign ones. However, both the notorious 90 and the subsequent stagnation of the technical thought itself in this direction prevented the development of success in the hardware. It is bitter to admit, but the seven or eight largest Russian universities and leading units of the Defense Ministry are only to some extent trying to achieve the parameters of the copied foreign structure, saturating their duplicates with the key elements of import performance again.

For several years, the exhibition bravado, commonly referred to as window dressing, has not been accompanied by real sea tests with an autonomous glider swim for at least a couple of weeks, not to mention the repetition of records of American copies of nine months of walking for several thousand kilometers across the Pacific Ocean. The miserable pool dives of domestic replicas even in the reports of the leading channels cannot hide the “sewer” components that our gliders consist of.

An attempt of the Foundation for Perspective Research to unite the developers of this technique through round tables did not bring a positive result: the lack of ideas within the invited groups does not reveal the leader, and the general mood to share the financial pie translates the problem into a non-constructive plane. 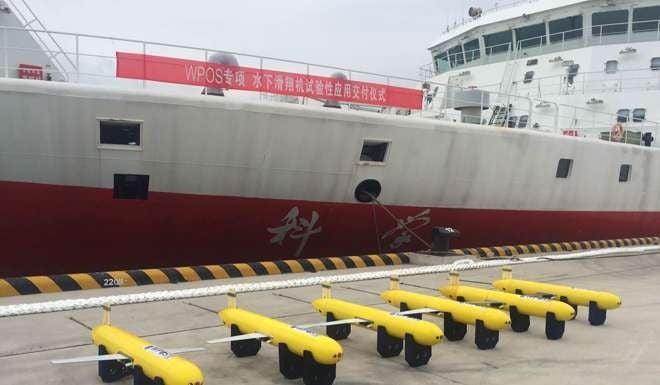 Against this background, the success of Chinese experts can be called ambitious: their glider has reached a depth in excess of 6300 meters. However, as they themselves honestly admitted, last year, with a similar attempt, the device was lost, which did not prevent another 12 from being made for record dives and testing swarm tactics. Just for comparison, I will mention that the characteristics of domestic exhibition samples are unlikely to allow them to emerge from the depth of 100 meters, and applicants for diving to 300 and even more so 500 meters are in the “development of design documentation”, more simply, reflection and pricing.

However, we will not panic, but we will carry out a sober engineering analysis of the design of the Chinese glider. In this case, we will try to maintain maximum impartiality.

So what is the depth glider for? Theoretically, by reducing the number of dive-lift cycles for converting them to linear movement, it will be possible to achieve maximum range with minimal energy consumption. But for operating at great depths, a hydraulic pump of the appropriate pressure is needed - here lies the main trick. The “head-to-flow” relationship is very hard, while ensuring high pressure, the pump will have a minimum flow rate - and it is unlikely that it can be made adjustable in such an envelope. Consequently, to pump a working fluid of the same volume in the buoyancy change module, such a pump needs to perform more movements, and this is both hydraulic and mechanical losses, which are subtracted from the percent efficiency.

The antenna carried forward hints at the further modernization of the glider with the installation of an additional propulsion unit from the rear; such constructions are not a novelty, they are also available from domestic manufacturers. But parasitic hydrodynamic forces arise on the surface of the apparatus, which will help to divert the glider planning from a given trajectory, which leads to more frequent activation of the compass and additional adjustments, and therefore energy costs. Rigidly fixed planning planes do not imply the use of a glider through torpedo tubes of submarines, and the impressive dimensions and weight require the presence of lifting devices on the vessel operator.

The sounded autonomy of the previous modification of the entire 30 day at a distance of a thousand kilometers indicates either the irrational use of the mass of the glider for installing batteries, or the low efficiency of the used drives and electronics. And most likely the lack of sources of renewable energy. In general, strong middling in its class without innovative delights, but with an emphasis on "diving."

What can, what is needed

Consider the "application matrix" of gliders, which consists of the range of seas adjacent to China and functions. It can be seen that the main oceanic areas occupy depths of up to two kilometers, and the hydrological parameters of water (temperature, salinity, speed of sound) collected by these specimens are important only for submariners, whose total line is up to one kilometer. It turns out that the depth of the Chinese glider in most cases will be excessively harmful. After all, to ensure the required dry volume, a robust case must be adequately reinforced and, therefore, weighted at the rate of external pressure of almost 700 atmospheres. Dimensions, weight, technological complexity of high-pressure hydraulics, low autonomy, increased load on the operating unit - you will have to pay for all the additional costs.

Undoubtedly, one can try to invent peaceful applications such as collecting soil samples from the bottom, observing the underwater world, searching for sunken objects and so on. But let's not forget that the main customer of the glider is the military, it makes no sense for them to spend public money to study the depths for the sake of their economic use. Therefore, more prosaic tasks will be to combat enemy’s bottom sonar stations, install mines on transoceanic cables to damage them at the right time and pop up bookmarks near the coasts and naval bases to cause inevitable damage to the aggressor’s economy (projects like “Dead Hand” or “Status -6 ") in the event of a war. I must say, this type of glider is the best fit for this. In truth, sabotage and subversive missions can be performed by other underwater vehicles, but not every country has powerful submarines for their covert delivery to the site.

In addition to the “guerrilla” function, gliders can solve the multiple tasks of anti-submarine defense, navigating submarines and their robotic options in the ocean, be carriers of UAVs for missile launchers launched by the AUG, and protect submarine alert areas from aviation enemy, independently shell the decks of aircraft carriers and do much more. Only the design of such diverse gliders is completely different from the hero of this story. They will be unified according to the main nodes among themselves in view of the required thousands of copies, and the main emphasis will be on the autonomy of the drift, and not on the depth of immersion - with the inclusion of a renewable energy source while improving the control and movement system. It will be like in the aviation of the last century: the transition from “bookcases made of slivers and ropes” to the streamlined, fast-moving liners familiar to the modern eye. But, apparently, the aforementioned evolutionary leap will not happen soon. Ships from slivers to make easier and more familiar.