August 28 2017
16
Liberals / progressives / leftists are intoxicated by their campaign of accusations. I will not say that I have not seen this before. These are the same people who have been idle for 16 years, when Washington completely or partially destroyed seven states. Not satisfied with this level of incitement of war and crimes against humanity, Washington directed the conflict with Russia. The Americans elected a president who said that he would relieve the tension in this dangerous conflict, and then the liberals / progressives / leftists attacked him. 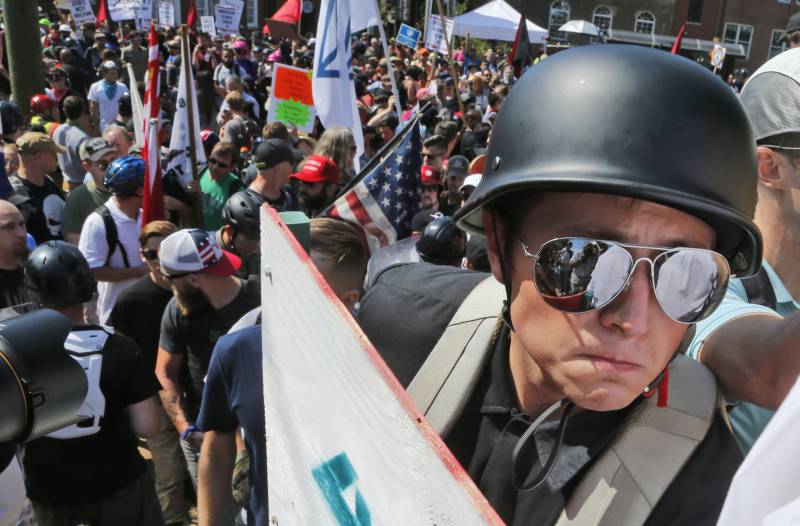 During the protest clashes in Charlottesville, a man was killed, and endless absurd, but violent, accusations were sent to the US President.

The New York Times presses are blamed on Trump for this crisis, declaring that he is “increasingly becoming isolated in the racial crisis that he himself has created.” Trump seems to be responsible for this crisis only because he accused both groups of protesters of violence.

But let's assume that the impression that he and many others formed on the basis of media reports is incorrect. Then Trump is guilty of the fact that he came to erroneous conclusions. However, he is accused of inciting and supporting violence from the Nazis. How is it possible to transform a mistake into malicious intent? The erroneous impression that has arisen on the basis of media reports does not constitute "the defense of the protesting white nationalists." The approval of the newspaper New York Times is not able to turn the lack of intent into intent. What the establishment is trying to do is push Trump into the ranks of the white supremacist idea. The establishment really wants Trump to be associated with these people.

It is clear that there are no grounds for such accusations. This is a lie that has been fabricated in order to delegitimize President Trump and those who elected him. 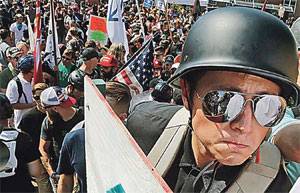 The question is who is behind such fabrications.

These fabrications encourage people to flee from Trump. Fabrications are also used as an excuse to organize a conspiracy to remove the president from his post.

He escaped from Trump the Strategy and Policy Forum *, which was headed by A. Schwartzman. Similarly, the Carter Center board fled from President Jimmy Carter when he criticized the apartheid policy pursued by the Israeli authorities against the Palestinians. The New York Times is now writing that the commanders of the United States military and arms of the armed forces "flee" from Trump. And the whole Republican Party.

This hypocrisy is amazing! For sixteen years, the leadership of the armed forces, the New York Times and all presstitute media, both political parties as well as liberals / progressives / leftists actively or passively participated in mass crimes against humanity. Millions of people were killed, maimed, deprived of shelter, shelter and driven from their places of residence. And only one death in Charlottesville produced a protest outpouring more than anything before!

I do not believe that it is sincere. I do not believe that people who are so insensitive to the death of millions at the hands of their own government can be upset by the death of a single person. But suppose Trump is to blame for the death of this woman. How is this blood comparable to the blood in the hands of Bill Clinton, George W. Bush-son and Obama? It seems quite obvious that the outpouring of sadness is a staging, designed to delegitimize the president and the people who voted for him. Now in our own country, we are experiencing the same things that the Obama regime perpetrated in Ukraine, of course, with the support of liberals / progressives / leftists.

Just as most of the protesters on Independence had no idea that they were being used, most protesters against Trump did not realize that their accusations were false. For most liberals / progressives / leftists, their hatred for Trump and the “white nationalists” is a reflex, the result of an “identity policy” ** that they have been fed for many years. 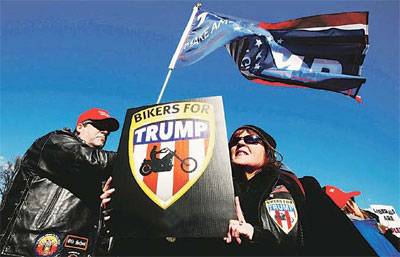 Any objective reading of the situation, however, leads to the following conclusion. The hatred that Trump and the “outcasts” that have chosen him cover is far beyond the hatred that the “white nationalists” show.

Members of the liberal-progressive left-wing community proclaim that such despicable people as “white nationalists” should not be allowed to carry out protests. Liberals / progressives / leftists forget that protest is right. Back in 1977, the US Supreme Court ruled that the protest could not be limited only because it could offend someone. Or because a violent reaction may take place during protests. If the protest is banned, any group that comes to power will be able to suppress the disagreement of all the others.

For decades, liberals / progressives / leftists have made tremendous efforts to separate people. All of these “studies of the black population,” “women's issues,” “indigenous peoples of America,” were easily transformed into trivial propaganda that spawned hatred. And one person who was striving for peace said: “A house divided in half cannot stand in a storm” (meaning A. Lincoln. - C. D.)

Charlottesville spawned a rampant campaign of condemnation and disclosure, which proves: we are a divided nation. Should a nation, so divided, be in conflict with Russia, China and Iran? If the US is the institutionalization of the white supremacy, as liberals / progressives / leftists claim, how could it happen that the US is also an “exceptional, irreplaceable people” entitled to bombard other nations by bombardment?

Obviously, much in this scenario makes no sense.

My readers are people who can think independently. They understand that to explain something does not mean to justify. My explanations may be wrong, but they are not an excuse. I consider it necessary to say this because my columns are placed on many websites, the readers of which want to hear only what they already believe in, and always do nothing but seek out who to expose and condemn. The great disadvantage of the United States is that only a very limited number of citizens can think independently. Perhaps this is a problem for each country, but for the United States for sure.

The United States has another major flaw. Our intellectual (perhaps I should say semi-intellectual) class is largely composed of cowards who are terribly afraid to tell the truth. Of course, given the “witch-hunt” mentality imposed by the “politics of identity”, these people have reasons to be afraid. However, their cowardice shifts the burden of finding and upholding the truth to very few.

PS The governor of the state of Virginia Makolif made false, spread throughout the world statements that the "white nationalists" had secret warehouses with weapons and that the Virginia police were in the minority in opposition to supporters of the superiority of the white race. The website Reason.com reports a state police report (http://reason.com/blog/2017/08/16/virginia-state-police-say-they-didnt-fin), refuting the statements of Makolif.