"John McCain" spoiled the reputation of the American fleet 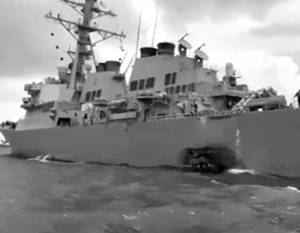 “Such incidents are rare, but two in one summer, both times involving the 7th fleet... It's overwhelming! ” - this is how American experts evaluated the collision of the US Navy destroyer John McCain and a tanker in the Pacific Ocean. Russian experts advise the Pentagon to think about the qualifications of its captains, and the Chinese authorities see American ships as a threat to international navigation.


Collisions of US warships in the Pacific are beginning to become something mundane. This time, the destroyer "John McCain" crashed on Monday, the plane of which rammed the tanker Alnic MC in the Strait of Malacca, not far from Singapore.

One of the first condolences was expressed by the “namesake” of the destroyer, Republican Senator John McCain (the ship was named simultaneously in honor of the father and grandfather of the senator; both were admiral). “This is very bad,” said US President Donald Trump briefly.

The reaction of China was more emotional, with particular attention to the water area of ​​the South China Sea (where the incident occurred and where the disputed islands to which China pretends are located).

The command of the US Navy's 7 Fleet promised to investigate the incident in the near future. In the meantime, search and rescue operations are being conducted at the scene of the collision. But at the moment there is no information about the missing sailors. Of the injured, four were evacuated to the hospital by the SA 330 Puma helicopter of the Singapore Navy, the fifth does not need to be evacuated. Navy ships of Singapore and Malaysia, as well as the American amphibious assault ship America, have already set off to help victims of the accident.

The collision of ships at sea, and especially with the participation of the destroyer, is in itself a rather extraordinary event. However, even more piquancy to the incident gives the fact that

This is the second accident in the Pacific Ocean in two months, in which the US Navy's 7 fleet is involved.

In late June, the board of the destroyer Fitzgerald ("Fitzgerald") with a bow bulb rammed a Philippine merchant vessel in the waters of Japan. Then, as a result of the accident killed seven American sailors.

It should be noted that just a few days before the incident with “John McCain”, the leadership of the American Navy actually admitted guilt for the incident two months ago. The fleet command dismissed the commander of the Fitzgerald and announced punishments against other officers of the ship, although the investigation into the collision is still ongoing.

What happened to "John McCain"?

The destroyer moved east of the Strait of Malacca to make a "routine" call at the port of Singapore. However, in 6.24 in the morning, according to the Japanese standard time (00.24 Moscow time), he received a blow to the back of the port side from the tanker Alnic MC. The circumstances that caused the accident are still unknown. The American ship was seriously damaged, but thanks to the efforts of the crew it remained on the move and independently headed for the Singapore port. The tanker escaped with only minor injuries to the bow.

"John McCain" - destroyer with guided missile weapons The Arleigh Burke class (URO) (“Arleigh Burke”), has been in operation since 1992, and is part of the US Navy's 7 fleet.

This is a fairly large ship. Its displacement is more than 8 thousand tons, the length is more than 150 m, the width is about 20 m, and the crew consists of 338 people. 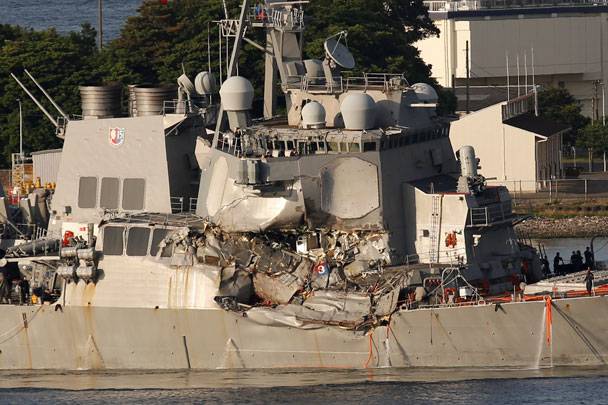 The ship participated in the US invasion of Iraq in 2003, during which 39 launched Tomahawk missiles.

In 2009, a slight collision occurred with the destroyer of a Chinese submarine, which damaged the towed sonar detection system. Recently, the ship was based at the port of Yokosuka in Japan. In early August, he, without the permission of the Chinese authorities, passed near the Mishchif Reef from the Spratly Islands (Nansha). In response, the Chinese Foreign Ministry accused the United States of gross violation of its sovereignty and international law.

Alnic MC is the built 2008 tanker used to transport oil and chemicals. The ship sails under the flag of Liberia, however, it is chartered by the Greek shipping company Stealth Maritime Corporation. It is much larger than the American destroyer. The length is 183 m, the width is 32 m, and the displacement ranges from 30 to 50 thousand tons, depending on the load. It was reported that at the time of the accident the ship was going without cargo.

Collision in the sea rather unusual incident

“The number of failures that must occur for something like this to happen makes it a rare occurrence. Sailors monitor radar devices around the clock, they have several sailors who are on duty on the bridge, where they also have radar devices, and they have at least one sentinel at the stern of the ship to observe exactly in case of situations of this kind. ”- said American Navy veteran David Larter.

“Any collision of two ships in any ocean or in any river is not normal. This is a violation of the international rules for the prevention of collisions of ships at sea (MPPCSS), ”explained Konstantin Sivkov, Doctor of Military Sciences, captain of the first rank of the reserve, to the VIEW newspaper. We must understand who is to blame, he stressed. In any case, this is an emergency situation that occurred as a result of a violation by one of the commanders or both of these MPPSSs, he added.
“This is a nonstandard situation,” Admiral Igor Kasatonov, adviser to the chief of the General Staff of Russia, former commander-in-chief of the Black Sea Fleet, stressed in his commentary of the VIEW newspaper. According to him, this could happen due to the fact that little attention was paid to observation in the long voyage. The fact that the commander of the destroyer made such a collision could indicate his poor preparation, the source said.

“Collisions such as these are very rare, and two in one summer, both involving the 7 fleet based in Japan, are overwhelming,” said David Larter.

However, these two accidents do not end the adventures of the American fleet in the Pacific.

In February of this year, the rocket cruiser Entitym ran aground in Tokyo Bay, damaging both propellers and the hub of one of them (the repair cost is estimated at 4,2 million dollars).

No one was hurt, however, as a result of the incident, thousands of liters of hydraulic oil were poured into the sea around 4,2. In addition, in May of this year, another Lake Korean Champion of the same Tikonderoga class cruised a South Korean fishing vessel in international waters near the Korean Peninsula. However, then no one was hurt either, and both ships remained on the move.

“We can only condole, because behind this are human sacrifices,” he added. The interviewee also stressed that this creates an increased probability of accidents. But if the tanker is loaded and, say, 12 thousand tons of oil spill - it will be an environmental disaster, he said.