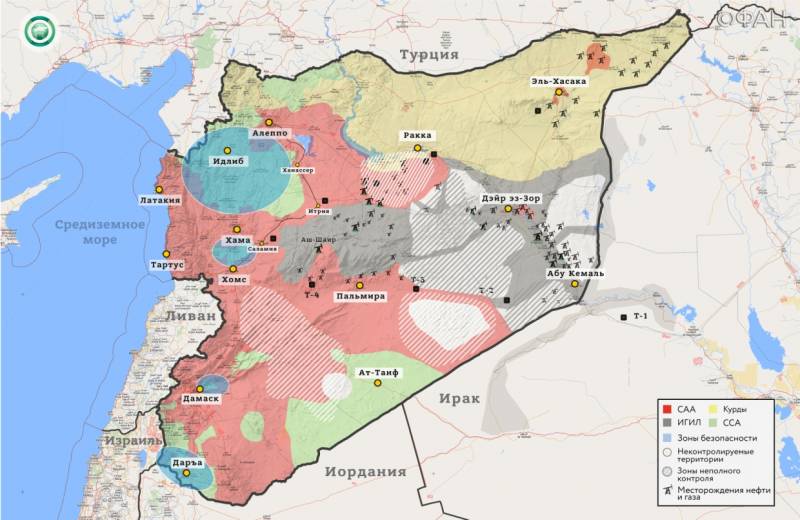 Russian aviation eliminated over 40 terrorists ISIS * (* terrorist organization banned in the Russian Federation) in Deir ez-Zor and Homs in a day.

Province of Damascus. In the mountains of West Kalamoun, fierce fighting continues between the Syrian army, backed by Hezbollah and ISIS.

Government forces are conducting an offensive against the positions of the Dzhebhat Fath Ash-Sham * group in the Jobar and Ayn-Tarma areas. Several buildings are occupied in Al-Manashir quarter.

The opposition group Jaysh al-Islam stopped military operations against Failak al-Rahman due to the fact that the latter joined the ceasefire and agreed with the Russian side to establish a de-escalation zone in Eastern Ghouta. At the same time, later militants "Failak al-Rahman" opened mortar fire at an international exhibition held in Damascus. As reported, 9 people died, 4 were injured.

In the territory of the Eastern Ghouta oasis, the conflict between anti-government groups and the Syrian army continues to develop.

Province of Aleppo. The Syrian Arab Army (SAA) is carrying out artillery shelling of positions of radical Islamists in the area of ​​the settlements of Murabbat Bisha in the south of the province, Kafr Hamra in the northwestern part of Aleppo.

The epicenter of the confrontation in this area is the northwest of the province. The opponents of the Syrian troops here are the Jabhat al-Nusra * and Tahrir al-Sham * groups.

Thanks to the support of the Russian Aerospace Forces, which destroyed several dozen militants of IG and 50 vehicles, the pro-government Shiite militia groups occupied a number of strategic positions in the area of ​​Hamim.

The pro-American coalition completely destroyed the infrastructure of the Al-Amar oil field during the airstrike.

Province of Rakka. The Syrian Democratic Forces (SDF) continues to advance towards the center of the administrative capital of Raqqa province. The battles are fought in the area of ​​the old city. In total, the Kurdish militia liberated 60% of the territory of Raqqa from ISIS. However, as the Kurdish formations gradually move towards the center of Raqqa, an increasing number of civilians are dying. ISIS * has fiercely resisted, actively using jihad-mobile suicide bombers to launch counter-attacks.

Province of Hama... The Russian Aerospace Forces, together with the Syrian Air Force, are striking the encircled city of Akerbat ("Akerbat cauldron"), where ISIS terrorists who did not have time to relocate to Deir ez-Zor are stationed *.

Province of Hasaka. As a result of the air strike of the pro-American coalition in Al-Jazaah east of Al-Shaddadi, a 41 civilian was killed.

Earlier, 200 US soldiers and a group of French army air gunners were deployed to the province to help prepare for the offensive operation on Deir ez-Zor.

Iraq. The Iraqi police, together with volunteers of militia militia groups, continues to advance to the city of Tall Afar, carrying out a sweep of the areas on their way. They captured the settlements of Al-Ibra, As-Sagir, Tal Siyan and Tabashir.
The soldiers of the Iraqi army established control over Mount Zambar, thereby blocking the path of supplying ISIS terrorists * Tall Afar - Mahallabia.

After the liberation of Mosul, the largest terrorist forces (approximately 1,5 thousand soldiers) are stationed in Tall Afar, which is the new unofficial capital of the “Caliphate” *.