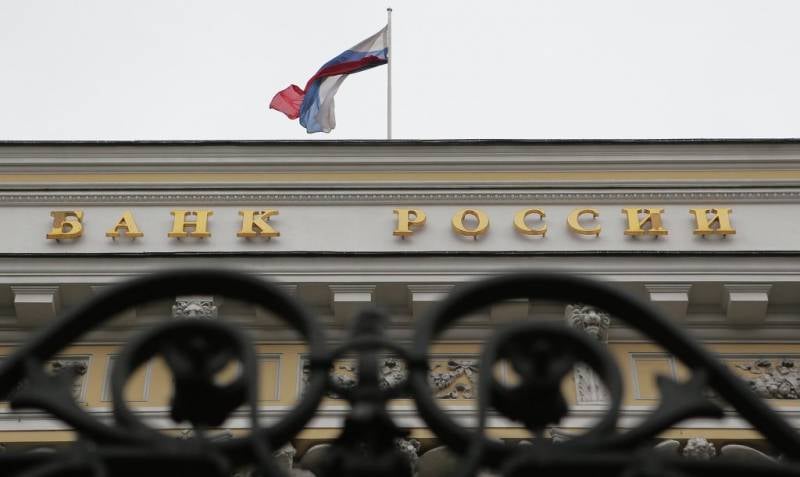 Recently, Deputy Foreign Minister Sergei Ryabkov made a statement about possible actions by the Russian Federation in response to the new package of United States economic sanctions. The key point of the proposals of the Ministry of Foreign Affairs of Russia is the reduction of our country's dependence in the field of international settlements on the US dollar. Washington needs the Russian side to be “on the hook,” the official said. The dollar as the currency of international reserves and international settlements of the Russian Federation is the same hook.

Similar proposals were heard from the mouth of some Russian officials, State Duma deputies, politicians before, but they were not of such official nature. Specific about how to get off the hook, it is rather, it is not the Foreign Ministry, and the Central Bank and the Ministry of Finance. I will try, if possible, to highlight the issue, setting out my vision for solving the problem.

Since 2013, the Bank of Russia has begun publishing statistics on the currency structure of settlements in the Russian Federation for the export and import of goods and services on a quarterly and annual basis. The positions of the three major currencies stand out: the Russian ruble, the dollar and the euro. All other monetary units are included in the article "Other currencies".

Let's see how the currency structure of calculations with all countries of the world in 2013 and 2016 looked. (tab. 1). 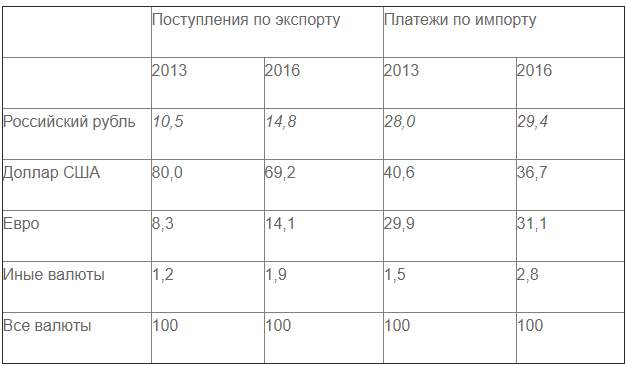 1. The US dollar has been and remains the main currency of Russia's foreign trade settlements;

2. The share of the dollar in export revenues is about twice as high as its share in payments for imports: the fact is that hydrocarbons dominate in Russia's exports, calculations for which for more than forty years are carried out almost exclusively in US dollars. Russia's imports are more diversified in the product mix, many products are traded on the world market for euros, British pounds, and other key currencies; their suppliers often agree to pay in national currencies of the exporter and / or importer;

3. Share of the US dollar over the period 2013-2016 decreased slightly in the calculations for exports, and in calculations for imports. In part, this decrease can be explained by economic sanctions against Russia, which have intensified its efforts to reduce dollar dependence in international settlements;

Not only Russia is trying to reduce its dependence on the US dollar. Other countries have also made official statements about the need to avoid the monopoly of the dollar, but so far their success has been very modest. According to expert estimates, in international trade about 70% deals are made in US dollars, 20% - in euros, and 10% accounts for the pool of remaining 16 freely convertible currencies CLS (international system of foreign exchange conversion transactions). Every day, about six hundred thousand exchange transactions pass through this system, the total amount of which exceeds 3,5 trillion US dollars. This international clearing center for currency transactions, by the way, does not include the ruble, the Brazilian real, or the yuan (which recently received the official status of the IMF reserve currency).

You can also look at the statistics published by the SWIFT system (international payments information transmission system), which serves the lion’s share of all international payment transactions in the world. According to the latest data (June 2017), in operations passing through SWIFT, the US dollar accounted for 40,47%; on euro - 32,89; British pound sterling - 7,29; Japanese yen - 3,16; for Chinese yuan - 1,98%. As for the ruble, it is somewhere in the middle of the second ten of currencies. It is noteworthy that today China occupies the first place in the turnover of world trade (its share is 13%), and the share of the yuan in SWIFT operations in 20 is less than the share of the US dollar (while the share of the United States in world trade is 12%) . Such imbalances have existed for many decades, there is no cardinal success in overcoming them yet.

The USA (first of all, the owners of money represented by the main shareholders of the Federal Reserve System) receive a huge rent from the fact that the dollar is used as the currency of international reserves and international settlements, and prevent any attempts to change the existing world currency order. The arsenal of methods for maintaining the status quo of the United States dollar is the widest - from propaganda and informational suggestion (“the dollar is the best currency”) to military operations and the destruction of states that encroach on the monopoly of the dollar (Libya is the last vivid example). 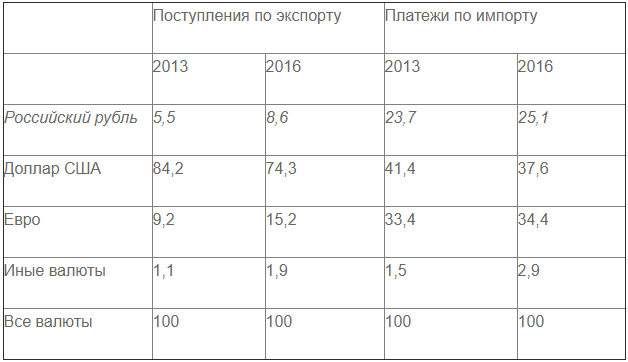 Now let's see what the currency structure of calculations of Russia with the BRICS countries looks like (table 3). 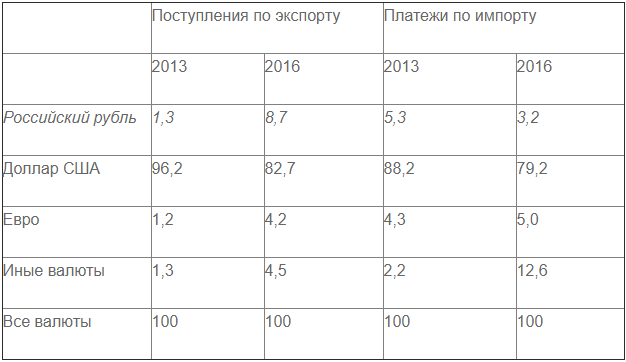 The data table. 3 for someone may be unexpected. We constantly hear about negotiations, agreements, joint projects within the group of BRICS countries, which include Brazil, Russia, India, China and South Africa. It seems that an active process of economic and monetary and financial integration of these five countries is taking place. However, the share of the Russian ruble in Russia's export calculations in 2016 with the BRICS countries was the same as with all foreign countries. And if we take the calculations for imports, the share of the ruble is extremely low - 3,2% (against 25,1% with all foreign countries). What is even more surprising: for the period 2013-2016. this proportion has even decreased. Statistics show that monetary integration within the BRICS group exists only on paper.

The Bank of Russia provides the currency structure of settlements of Russia with such important partners as China and India (Table 4 and 5). 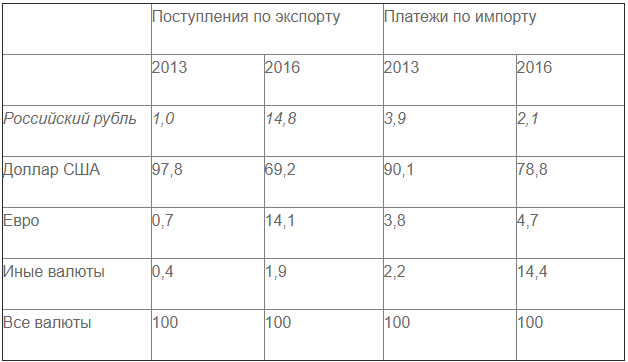 Despite all the declarations on the need for a transition in mutual settlements between Russia and the PRC to national currencies (ruble and yuan), the currency structure of their calculations is characterized by the dominance of the US dollar. Moreover, the share of the Russian ruble is indecently low in import payments (2,1% in 2016), it even fell by one and a half times compared to 2013 (at the end of 2014, the Russian ruble collapsed, which damaged Russia's economic relations with its partners: they revised their intentions to expand settlements in Russian currency and again began to demand from Russia settlements in dollars or other more stable currencies). The share of “other currencies” has increased very noticeably in import payments. I think that behind this position is the yuan. To date, currency asymmetry has arisen in the calculations of Russia and China: the use of Chinese currency is many times higher than the use of the Russian ruble.

But the currency structure of calculations with India (table. 5). 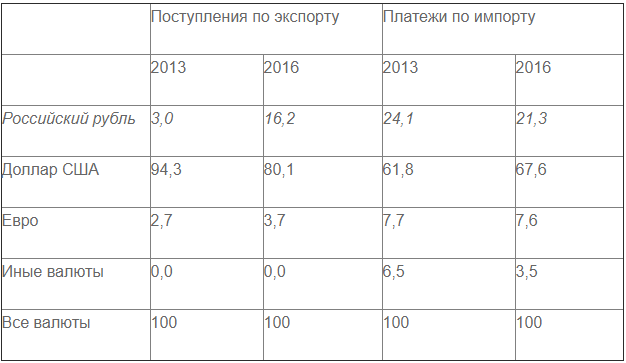 In trade with India, Russia has a relatively smaller use of the US dollar and uses substantially more rubles, when compared with China. Although in general the share of the Russian ruble in payments for the import of Indian goods and services for 2013-2016. shrunk. The reason is the same - the collapse of the ruble in December 2014, its high volatility and increased distrust of the Russian currency on this basis.

In conclusion, let us consider the currency structure of settlements of Russia with the countries of the Eurasian Economic Union (EAEU) within the Russian Federation, Belarus, Kazakhstan, Kyrgyzstan and Armenia. 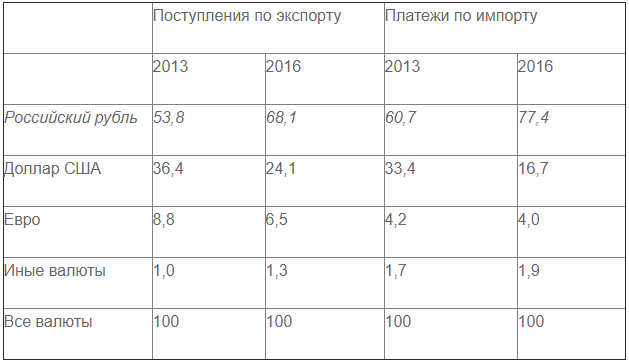 In the calculations with the four countries - members of the EAEU, the Russian ruble is the leading currency, its share exceeds half in both export and import operations. Over the period 2013-2016. the share of the Russian ruble has noticeably increased in both export receipts and import payments. The share of the US dollar has dropped significantly. This currency structure is encouraging, but there is one "but." The trade turnover of Russia with the EEU member countries in 2016 amounted to 39 billion. Since the total trade turnover of Russia with all countries of the world last year was 471 billion dollars, it turns out that only 8,3% fell to trade within the EAEU. The success of the Russian ruble in trade with four other countries of the EAEU is partly due to the fact that this trade is skewed: exports from Russia to the EAEU countries in 2016 amounted to 25,46 billion dollars, and imports - only 13,58 billion dollars. In fact, the ruble is not used here so much as a tool for settlements in foreign trade, as much as a tool for hidden lending to Russia's partners in the EAEU.