We, Russians, are obliged to protect the memory of people from inhumans 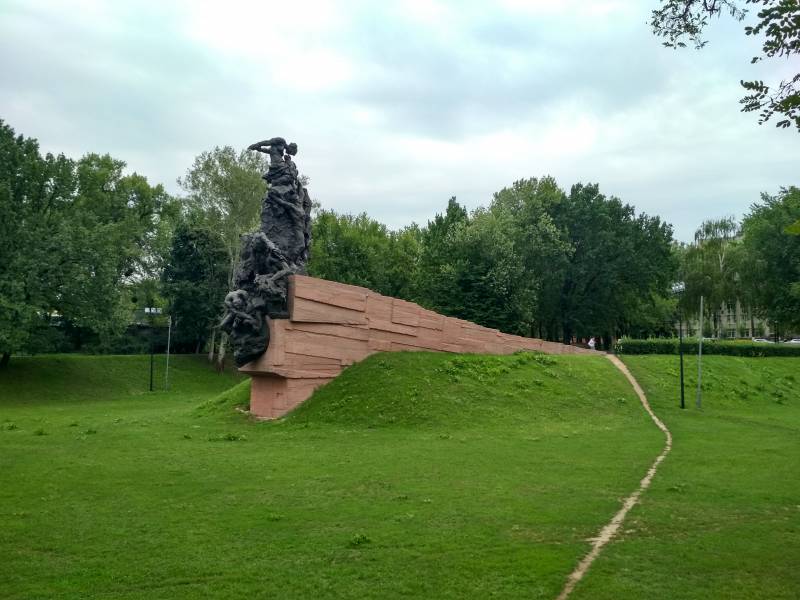 We are, in principle, accustomed to the fact that all news from Ukraine or bitter, or funny. It is already customary that nothing sensible or logical from the other side will arrive. Country 404 as it is in all its glory.

The reaction of the majority of readers to Ukrainian topics becomes understandable. We got it. We got our frantic, stupid hatred and other phenomena of today.

Take a separate Ukrainian-man. With the understanding and ability to use the head. I have a lot of these all over Ukraine. On our territory - even more so. All in mind and concept. To say that all "gifted" completely in power, too, is impossible. Someone writes in social networks and jumps on various holidays like Independence Day in embroidered shirts.

By the way, embroidery is not the worst thing in Ukraine. And the people who walk in them are not necessarily with the pribabah.

But let's talk about those who are clearly closer to the animals.

The fact that the total brutality under the mark of decommunization suits the Kiev junta is already clear to everyone. As well as the fact that the nationalists of Ukraine are trying to become the "beast" of the beast.

The latest example from my Kiev friends. Babi Yar. 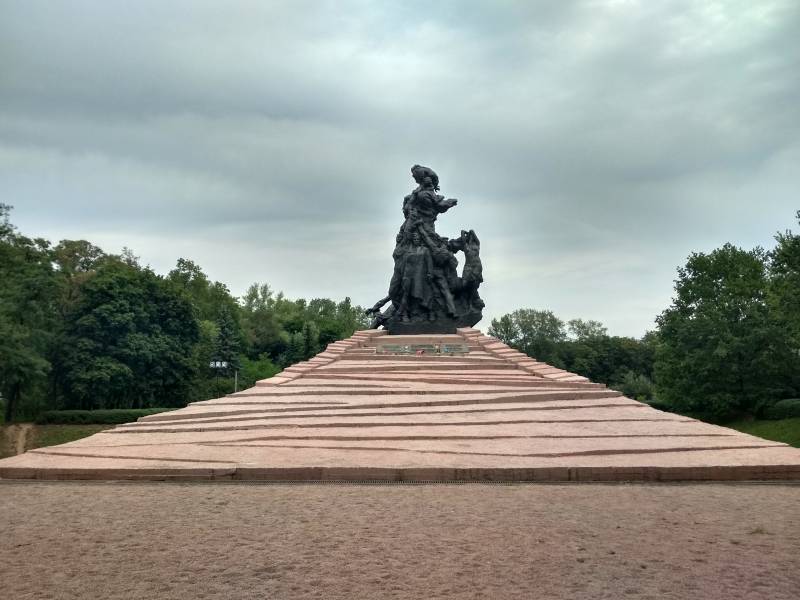 The most famous place of the tragedy is not only the Jewish people, death does not know nationality. Fascists simply killed people, residents of Kiev and other Ukrainian cities. What difference does it make now who they were, Russians, Jews, Karaites?

Let's just say, today Babi Yar is not a place for walks and rest, and it is visited in large quantities only on the days of memory. Two people were there at my request, in order to photograph the whole complex. Seeing far ahead three more, were surprised. The evening of the working day, two guys and an older man, you can't see from the back.

Spending time on the photo at the beginning, my friends came to the monument. And the picture was like this: 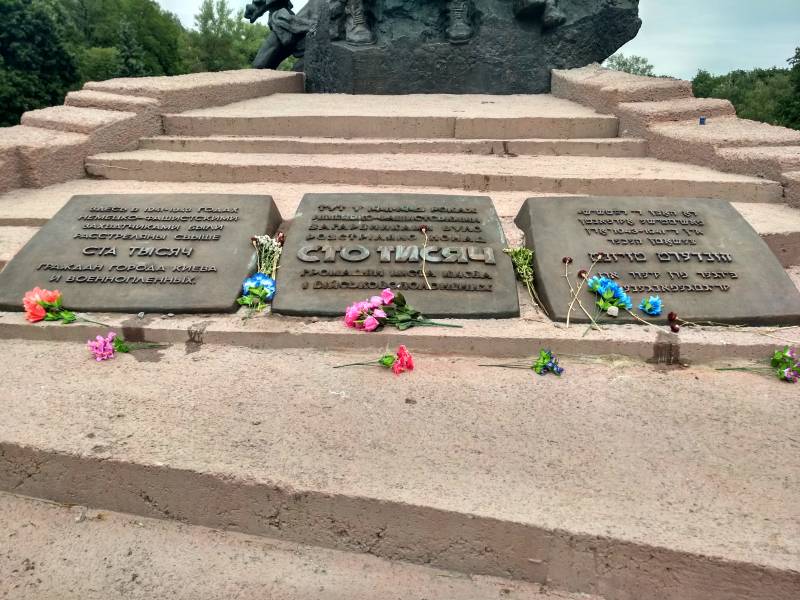 Yes, this is exactly what you probably thought. Not water.

I’ll omit the comments, there are just Kiev animals that crap at monuments, and there are Kievans who are outraged.

Further, as another example, a fresh case in Kirovograd. 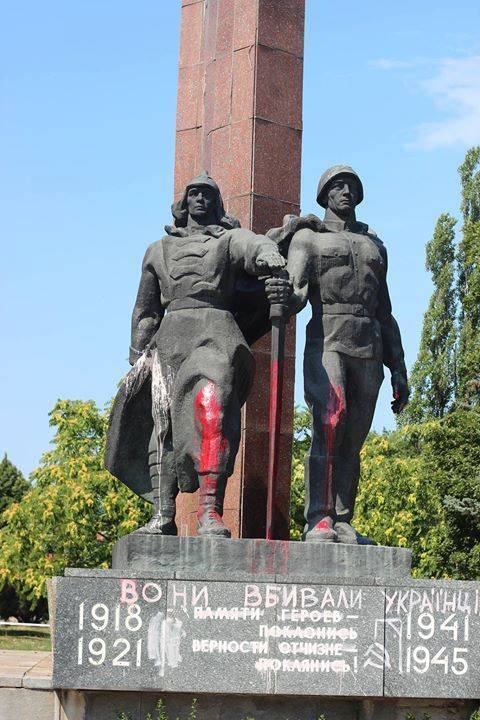 And Poltava. There is always something happening around the monument to General of the Army Vatutin. My countryman was not lucky to finish the infantry school in Poltava. The general who liberated Kiev was killed, having been wounded in a shootout with those whose admirers are now fighting with monuments. 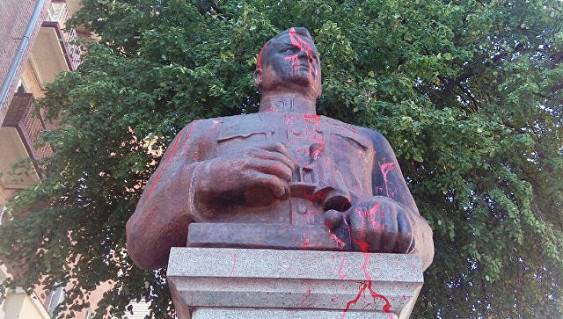 That was in June of this year. In May, such bestiality occurred in Kiev. And here, again Poltava. August 2017. 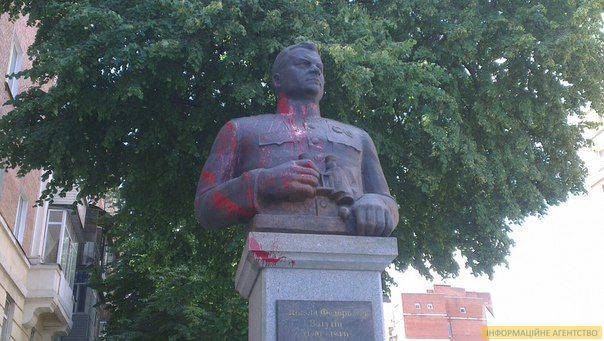 I will not angrily brand these animals, it is clear that it is useless. As useless as to appeal to the conscience of ukrohunty. If they were given free rein (in the sense of money), they would build monuments to a warm companion that arranged Babi Yar: Eberhard, Blobel, Rush, Kvitra and their executioners. And they would beat the pedestals with their heads in ecstasy.

With people, of course, animals do not fight. It is difficult and dangerous, as shown by the "ATO zone". From there, you can return to the wooden box.

And here comes a thought. Well, if animals are not able to curb their pathological instincts, then sensible people should take care of them.

What is most lacking in Ukraine? The correct answer is not brains, but money. It is believed that the monuments that are desecrated and are part of our stories, you just need to buy them. For money.

Russia is a huge country, there is enough space for everyone. In the same Voronezh, where the name of Vatutin is highly respected. But there is no monument due to some misunderstanding.

Meanwhile, it was precisely during the defense of this city that Vatutin was recognized as a commander.

In general, the story of his career is worthy of a separate story. The headquarters, as is the staff officer, the chief of staff of KOVO became the first deputy chief of the General Staff Zhukov.

And in July, 1942, the headquarters formed a new Voronezh front, which was to forge the advancing German units. When the question of the commander was decided, Vatutin unexpectedly offered himself. Stalin was surprised, but Vatutin was supported by Vasilevsky, and the appointment took place.

It is said that the appointment on the German side was accepted with approval. Even in leaflets they wrote that with such a Russian commander near Voronezh Khan. Perhaps, ours thought so, and not without reason. Vatutin really had no experience of personal leadership on the scale of the front.

However, Vatutin really showed that he knows how to lead troops. The Voronezh Front became a meat grinder for the 30 divisions, which were so lacking at Stalingrad. “Two in one”: Voronezh could not be occupied, and the silenok was not enough for Stalingrad.

And then there were Stalingrad, the Kursk Bulge, the Germans kicked out of the Donbass, the forcing of the Dnieper and the liberation of Kiev. And the fatal bullet that cut short the life of the general.

And why today the monuments of Vatutin should serve as objects of expulsion for representatives of the Ukrainian fauna? Redeem, take out and install in more decent places. And for the money received for this, let them even establish a Bander there, even Shushkevich, and jump around them in flocks of spring grazing.

Difficult problem with monuments, but it must be solved. Whether to the state, the whole world, but we are obliged to protect our history in the face of monuments to our soldiers and officers by all available means.

All available, not just the protests of the Ministry of Foreign Affairs.