Who gave the North Koreans engines for missiles? Versions: from "Yuzhmash" to the Kremlin

August 18 2017
37
From the Americans, who know everything, it became known: the ballistic missile engines in the DPRK are very similar to those that they do at the Yuzhmash enterprise (Ukraine). This explains the rapid growth of the Juche country in the "development of technology". However, at Yuzhmash, they did not agree with the American hypothesis, calling it far from reality. Also made. about. Head of the Ukrainian State Space Agency Yuri Radchenko, who said that Moscow could have supplied engines to Pyongyang. 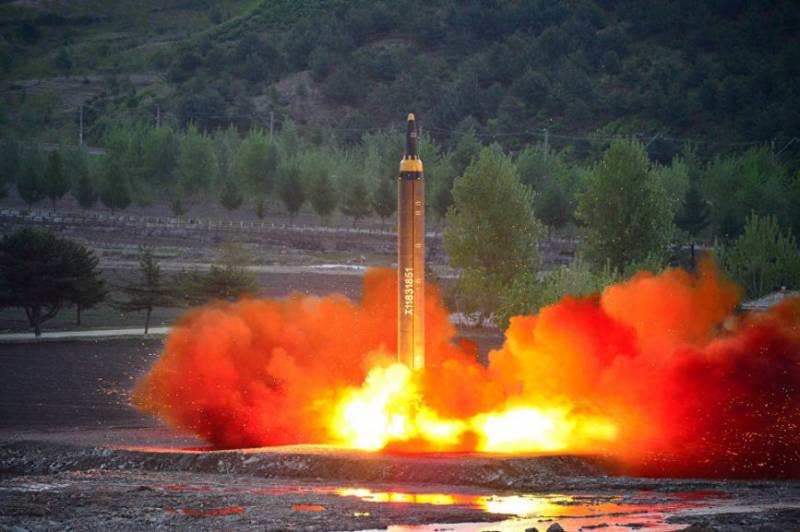 In world politics the “Russian trace” flashed again. The Russians are to blame for the supply of North Korean engines for ballistic missiles, because they themselves have almost the same totalitarian regime as in the Juche state. This made it clear in Kiev. And provocatively-minded Americans cast a barrel on good Ukrainians in vain.

Let's sort everything out in order.

The primary source of information about the Ukrainian-North Korean brotherhood in equipping rockets with engines was the mouthpiece of a free press - the New York Times. It seems to be not in the hands of the Kremlin yet, although the appropriate hypotheses will undoubtedly appear after the coming cuts in the Department of State programs to support the liberal press.

William Braud and David Sanger in my article told the world community something out of the ordinary. As if Ukraine, aspiring to liberal democracy, is helping Kim Jong-un, who is in a political confrontation with the United States, is not at all a liberal regime.

There’s a sensation: a photo published by the North Korean State News Agency in July 2017 showed the Hwasong-14 test. A missile is believed to be capable of reaching the mainland of the United States. According to experts, the success of North Korea in creating an intercontinental ballistic missile, which seems to really fly to the United States, was made possible thanks to the “acquisition of powerful engines on the black market”. Probably, these engines were produced by a Ukrainian factory that previously had "historical connection ”with the Russian missile program. Michael Elleman's investigation seems to explain the mystery of how North Korea succeeded after so many missile launch failures.

Analysts who studied the photographs in which the leader of northerners, Kim Jong-un, examines the new rocket engines, came to the conclusion: the engines are similar to the designs that once set off the missiles of the Soviet Union! The engines were so powerful that one intercontinental missile could carry up to 10 thermonuclear warheads.

This kind of engines were produced only on a few Soviet objects. Investigators from the US government and experts focused on the rocket plant in Dnepr (Ukraine). During the Cold War, the plant in this city produced "the most deadly missiles" in the Soviet arsenal, including the giant SS-18. The plant remained one of the main producers of missiles for Russia, even after Ukraine gained independence.

When the “pro-Russian president,” Yanukovych, fled from Ukraine (2014 year), difficult times began for the state enterprise “Yuzhmash”. The plant was idle, mountains of unpaid bills grew, the staff had a "low morale." Experts believe that all of this together has led to a black deal with the DPRK.

“These engines were probably supplied from Ukraine, perhaps in an illegal way,” Mr. Elleman said in an interview with reporters. “The big question is how much [engines] they have, and whether Ukrainians are helping them now. I am very concerned about this. ”

He also recalled that the UN investigation had concluded in its time: North Korea six years ago was trying to steal missile secrets from the Ukrainian defense complex. Two North Koreans even caught. The report of the UN investigators states that the information that they tried to steal, belongs to the category of advanced "rocket systems, liquid engines, spacecraft systems and rocket fuel systems." Now experts believe that in the conditions of the chaos of post-revolutionary Ukraine, Pyongyang made a second attempt to get what he wanted.

A detailed analysis of Mr. Elleman is a public confirmation that US intelligence officials spoke privately before. The new Kim Jong Un rockets are based on very sophisticated technology. The North Koreans simply could not have made such a rapid leap in technology development. Apparently, they launched the new engine for the first time in September of 2016. And this meant that it took only 10 months to move from the base stage to the launch of the ICBM!

Last month, the newspaper reminds, the Yuzhmash plant rejected the information that the plant complex allegedly fights for survival, and therefore sold its technologies abroad, in particular, to China. The company's website says that the company does not do this and will not do it: it will not participate in the “transfer of potentially dangerous technologies outside Ukraine”. American investigators, however, do not believe in this denial. However, they note that they also have no clear evidence of the opposite, since the government of Poroshenko, who recently visited the White House, "knows nothing" about what is happening "inside the complex."

Therefore, hitting the DPRK of Russian engines, known as RD-250, is still a mystery. Elleman does not exclude the possibility that the large Russian rocket enterprise Energomash, which has strong ties with the Ukrainian complex, also played a role in the transfer of North Korean RD-250 engine technology. He said that the remainder of the RD-250 engines could be stored in Russian warehouses.

"Bulletin of nuclear scientists" confirms the theses of Elleman. The other day the publication provided a detailed analysis of the new engine of North Korean missiles. Scientists have concluded: the engine is based on RD-250. The finding, according to experts, “raises new, possibly sinister questions.” In their opinion, such discoveries suggest both new threats from North Korea and the danger of the proliferation of rocket weapons in the world: after all, the Ukrainian plant is financially weak so far. Yes, he makes trolley buses and tractors, but rocket customers would allow him to "return some of his glory."

At Yuzhmash itself, the statements of American experts, cited in the New York Times publication, are refuted.

“The facts stated in the publication are not true. In particular, Yuzhmash is not only not the main producer of rockets for Russia, but also does not supply missiles at all in the Russian Federation, nor their parts and assembly units, including rocket engines, ”the website quotes the Yuzhmash statement. "Observer".

The company also reported that the expert’s hypotheses about a possible “missile” connection between Ukraine and North Korea are irrelevant to reality, and “Yuzhmash” has nothing to do with North Korean missile programs: “Yuzhmash” has never had and now has nothing to do to the North Korean space or defense missile programs. In the years of independence, “Yuzhmash” was not and is not being released. ” The only serial engine delivered in recent years for export, clarified at the enterprise, goes to Italy. It is designed to work in open space and is unsuitable for use in military ballistic missiles.

An article in The New York Times at the plant was called provocative, based on incompetent opinion.

About the provocative material in the American newspaper said and Secretary of the National Security Council of Ukraine Oleksandr Turchynov. is he turned the arrows in Russian: “This information has no basis, is provocative in content, and most likely provoked by Russian special services to cover their own crimes.”

“Ukraine did not supply rocket engines and any rocket technologies to North Korea. We believe that this anti-Ukrainian campaign was provoked by the Russian special services to cover their participation in the North Korean nuclear and missile programs. ”

The voice of Turchinov was picked up by the acting head of the Ukrainian State Space Agency (Goscosmos), Yuri Radchenko. At a press conference he said that Moscow could supply Pyongyang with missiles, engines and fuel components. And all for the sake of friendship!

“Considering the friendly relations with Korea, Russia could have every reason to supply rockets, engines, and fuel components there,” Radchenko quotes. UNIAN.

He also recalled that Ukraine before the 2001 of the year produced the rocket engines mentioned in the publication of the American newspaper, but all of them were delivered to Russia and are stored there as part of the Cyclone 2 and Cyclone 3 missiles.

“According to current information, Russia currently has 2 Cyclone and 3 Cyclone missiles in the amount of 7 to 20 missiles. There are engines, there is documentation. They can supply these engines as finished products to anyone, this is not excluded, ”said further and. about. In his opinion, these missiles will not be used by Russia anymore.

As for the publication itself in the New York Times, the official considered it to be a provocation inspired by the Russians: “The high degree of probability that the appearance in the press can be inspired by our“ friends ”from Russia, because they are interested in lowering the rating of our country in those projects in which we participate. ”

And here is the cherry on the cake. With General Director of Yuzhmash Sergey Voit, as reported "Vesti", talked famous pranker Vladimir Kuznetsov and Alex Stolyarov, I mean Vovan and Lexus. The latter deftly pretended to be Turchinov, and the director told him hitherto unknown details about the work of the design bureau Yuzhnoye (SFC).

Voit said he had no idea how the engines could get into the DPRK and suggested that Russia was to blame for everything: after all, the developers of the documentation are there.

Then he recalled the CCD as a “weak link”.

“The weak link, of course, is the KGB, we have no one to suspect. And they go [abroad], they have contacts. We need to work with them so that they are less trindeli. "

In conclusion, we add that the numerous denials received from officials of Ukraine did not quite convince Washington of the purity of Ukrainian thoughts.

If information about engine supplies to Kim Jong Un’s regime is confirmed, the United States will consider this a serious matter, the State Department said.

“We are aware of these messages,” Heather Nauert, the head of the State Department press service, quotes the TV channel "NTV". - This is the question that we take very seriously, if the data is confirmed. I know that in the past, Ukraine prevented the supply of sensitive substances to those states whose actions we are concerned about. We have good and strong ties with Ukraine. Ukraine has a good track record in nonproliferation. ”

As you can see, the ability to restore the shaky reputation of Kiev is available. In the delivery of “sensitive substances”, the arrows need to be translated into Russians. The option is a ride, because, as always, there is no evidence from American investigators and intelligence officers.