August 17 2017
13
The Russian VKS eliminated the 14 terrorists of the IG (grouping is prohibited in the Russian Federation) in Homs; FAN with reference to Syrian sources. 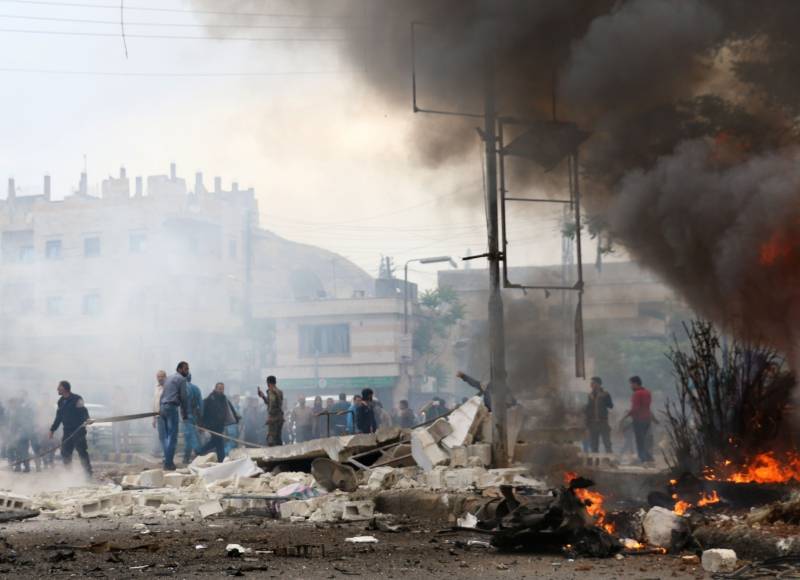 On the territory of the Eastern Guta oasis, the confrontation between the Syrian Arab Army (CAA) and the militants of the radical opposition is gaining momentum. Islamists "Faylak ar-Rahman" conducted an underground passage under the headquarters of the CAA and blew it up. At least 10 soldiers were killed. Syrian artillery is conducting intensive shelling of militant positions on the Duma-Chiffonia highway in the area of ​​the Al-Salihia settlement. In turn, militants of the Faylak ar-Rahman and Tahrir ash-Sham groups fire at the CAA in the Ain-Tarma, Dzhobar and Zamalka areas, hindering the advancement of government troops.

The Russian Aerospace Forces attacked the deployment zones of IS militants north-east of Khumayma (Homs province), eliminated 14 terrorists. The CAA established control over the territories in 15 kilometers west of the Al-Qom settlement.

In the north of Idlib province, a powerful explosion thundered. The incident occurred in the village of Al-Dan, located near the border of Syria and Turkey. According to the human rights organization, civilians died as a result of the incident, there are also information about dozens of injured. The cause of the explosion was the detonation of a homemade bomb. To date, none of the terrorist groups has claimed responsibility for what happened.

The Syrian Air Force, with the support of the Russian Aerospace Forces, attacked positions of the IG in the western part of Deir ez-Zor province.

Syrian Democratic Forces (SDF) continues to sweep the city of Raqqa. The main fights unfold in historical parts of the city. During the latest clashes, both sides suffered casualties in manpower and equipment. Kurdish troops eliminated at least 23 IS terrorists, and also destroyed one military pickup truck and four jihad mobiles. At the same time, the SDF lost 13 soldiers killed.

The air forces of the Western coalition dealt another blow to the residential areas of the city of Rakka. As a result of the airstrike, the church was destroyed. Later it became known that another airstrike of the international coalition took 14 civilians to life, another 74 man was injured.

The IG formations launched a counter-offensive in the southern part of the Rakka province. According to the Syrian Democratic Forces Alliance (SDF) press service, the terrorists seized the settlements of Ghanim Al-Ali, Atshan, Abu Hammad, Mukla Kabir, Numaisa, Jabir and Khumeysiya. The SDF command is deploying additional Kurdish militia forces to the region.

It became known that the Syrian Arab Army (CAA) in the southeast of the Raqqa province came under mortar shelling of the IG, Raqqa 24 writes. Militants of the terrorist group attacked units of the Assad army in the populated areas of Abu Hamad, Salem Hamad and Atskhana. As a result of the shelling, eight SAA soldiers were killed.

Russian Aerospace Forces struck a number of attacks on the positions of IG terrorists in the vicinity of the town of Akerbat in the east of Hama Province At the moment, the Syrian Arab Army (CAA) with the support of the Russian videoconferencing is moving in the direction of the strategically important city Akerbat, which is occupied by the IG. The soldiers of the government troops managed to get to the city from three sides. Today, military sources reported that the CAA assault groups marched south of Itria and north of the Al-Shair gas fields in the direction of Es Savannet. Having gained control of this settlement, the government forces closed the encirclement, thereby forming the so-called "Akerbat boiler".