Comedy and tragedy of Ukraine 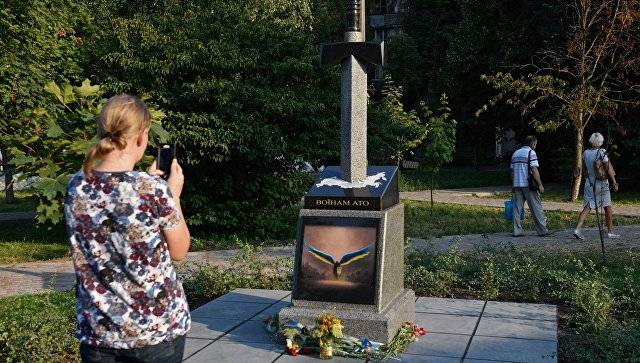 In fact, I really want to write about Ukraine in a positive way. Warms the heart of any reason for this. For example, the "Immortal Regiment" in Kiev and other cities of Ukraine, when people took to the streets with portraits of true Heroes despite the fear of neo-Nazis. Or the fact that people come to the House of Trade Unions in Odessa on the second day of each month with flowers, despite the threats of Nazi groups.

Unfortunately, there are not many such reasons. Most often there is another. Either a cheap comedy, or a real tragedy. So there is a post-Maid Ukraine - to the point of laughter and tears.

Just recently, the Minister of Social Policy Andrei Reva hinted that the Ukrainians ... were zazhralis. They put before him on the 112 TV channel the question that the Germans take 14% for food, and the Ukrainians take half of their income. He found the reason: they say, the Ukrainians and the Germans have a different food culture: “The Germans eat a little differently ... Food prices are about the same in Ukraine and Germany ... They eat less, not because they have no opportunity, but because such a culture. And therefore spend less compared to our people". Of course, the minister did not bother to compare the level of wages, but he made a valuable admission: at least something has become like in Europe. Namely - the price of products. As it turned out, the problem doesn’t concern Reba himself - some German could well envy him: in July alone he received over one hundred thousand hryvnias.

For example, officials not only of Ukraine are a separate caste, terribly far from the people. And the Russians, they happen, will blurt out something out of the ordinary - such as how much an ordinary family can save for an apartment every month. But in order to look into the mouth of impoverished citizens like this and reproach a piece of bread, it is necessary to be the minister of social policy in Maidan government!

Let us now turn from bread and fat, essential to spectacle. For the Ukrainians are trying to deprive them. Recently, the cases of introducing popular artists to the Peacemaker website have become frequent. Almost every day someone is on the black list.

Recently, Oleg Gazmanov's data was entered on this criminal website (we must pay tribute to him - the former advocate of liberal ideas at this stage had the courage to speak for the people of Donetsk and Lugansk People's Republics). The same lists included rapper Basta, Garik Sukachev, Sergey Galanin, and even the long-term host of Fields of Miracles, Leonid Yakubovich. They committed “terrible crimes”: “illegal border crossing”, “illegal concert activity”, and also - oh, this is “the most terrible villainy”: “Denial of Russian aggression”! (And just - went to the Crimea). And just entered news about the latest replenishment site "Peacemaker": a group of "Roots".

Of course, getting to this site is not equally dangerous for everyone. If for those who live on the territory of Ukraine, this can be very serious trouble and even death, for Russian artists the consequences are somewhat different. In this case, a ban on entry is possible, and if you manage to break through the Russian-Ukrainian border, the concert can be canceled or thwarted by radical hooliganism thugs who assume the right to decide for others what to watch, who to listen to and “ than to breathe. Almost according to Gazmanov, if we recall his song about the “fresh wind” (which turned out to be true, it turned out to be a trash wind).

The Ukrainian authorities are trying to attract Europe to their side. Sometimes it works out: “Eurovision” has bent under itself. Previously, the non-admission of Russian participant Yulia Samoilova was a violation of the rules of the competition (to which, however, for the sake of the political situation, they closed their eyes). Now, according to the new rules, member countries should not nominate those who are denied entry into the host state. This rule was introduced specifically for the sake of Ukraine, or rather, for the sake of its government officials, whose behavior is difficult to regard otherwise than a cheap comedy.

Given that the spirit of "Eurovision" implies a ban on any political demarches, - now any unwanted country can not be allowed to compete. The preposition can be found any. After all, as we remember, all the "fault" of Yulia Samoilova was that she was in the Crimea. (Apparently, by fighting this fragile girl, the Maidan authorities tried to regain the peninsula!)

In this way, a question that should not concern politics - who will sing at Eurovision - becomes the most acute political one: whose Crimea?

It can also be said that all these artists, all this pop, all this “Eurovision” have no relation to art. But you can admire the new specimen of Ukrainian high art. In Kiev, sculpted a monument to "Hero ATO" - ancient sculptors, as they say, rest.

According to the authors of the "masterpiece", a big sword pierces through the map of Russia. However, associations in connection with aggressive sculpture are born very different. The most decent: it looks like a gravestone of the ATOshnikov, into which a stake was driven. That would be right: the ghouls are the ghouls. For strange statements by ministers, whistling around objectionable artists is just a cheap comedy. But the fact that the criminal "ATO" continues is a real tragedy ...