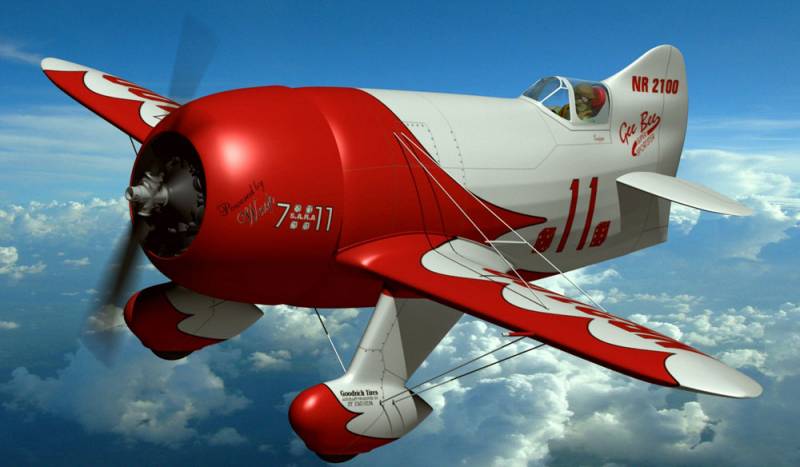 Exactly 85 years ago, 13 August 1932 of the year, the Granville “JB” R-1 racing aircraft took off for the first time. Despite the funny appearance, this machine has justified its purpose. Already September 3, the pilot James Doolittle, set a world speed record for land planes on her, speeding up to 477 km / h. It was almost one and a half times more than the best fighters of the time.

This result was achieved, despite the use of a star-shaped motor with a large “forehead”, a non-retractable landing gear and a wing with braces that created additional aerodynamic drag. The developers of “GBB” - the Granville brothers relied on the maximum reduction in the size of the car, which in fact was a well-cherished motor with a tiny cockpit and small wings. Thus, a reduction in frictional resistance was achieved. This also contributed to the careful alignment and polishing of all exterior surfaces. In addition, the smaller the design, the easier it is at equal strength.

The aircraft with an extremely short fuselage and a high load on the wing turned out to be insufficiently stable and rather dangerous. Both built copies - R-1 and R-2 - crashed in 1933 year, burying their pilots under the rubble. However, their concept undoubtedly influenced other developers of high-speed machines, including Nikolai Polikarpov, who, just in 1933, designed his famous fighter I-16.

Some authors even wrote that the 16 was almost a copy of “GB Bi” adapted for military use. Of course, this is not the case, although the similarity can be traced. It is especially noticeable on TsKB-12 - the first prototype of the "donkey", the 30 soared for the first time on December 1933 of the year. The same maximally shortened fuselage with a small closed cabin and a wide cylindrical hood, caused by a large motor diameter (by the way, few people probably know that the 16 was the shortest fighter of World War II).

True, Polikarpov provided the car with a significantly increased, compared to the "GB Bi", wing and tail to provide maneuverability and stability more or less acceptable for a fighter. However, due to the short shoulder of the removal of the steering surfaces, the 16 turned out to be too "fidgety" and difficult to manage, which caused many accidents. The pilots joked (or not quite joked) that those who mastered the 16 will be able to fly without fear on anything.

In general, it is impossible to say unequivocally whether the adoption of the concept of a racing “flying keg” was justified in a combat vehicle. I think the debate on this topic will go on for a long time. 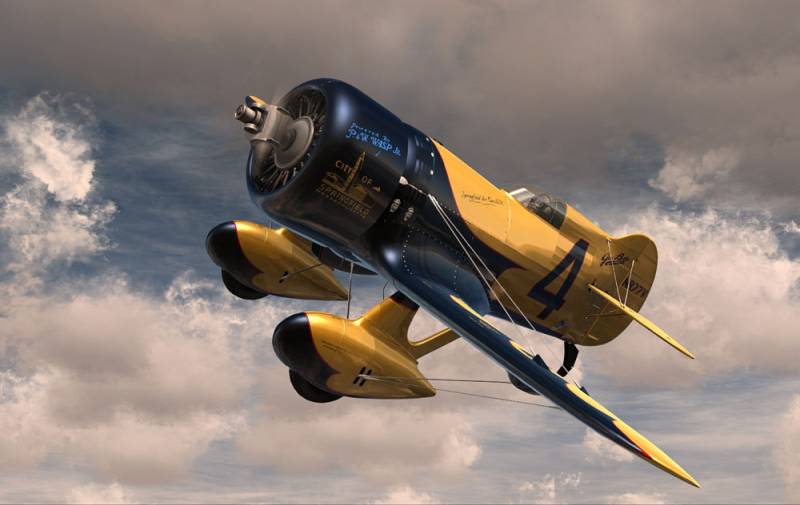 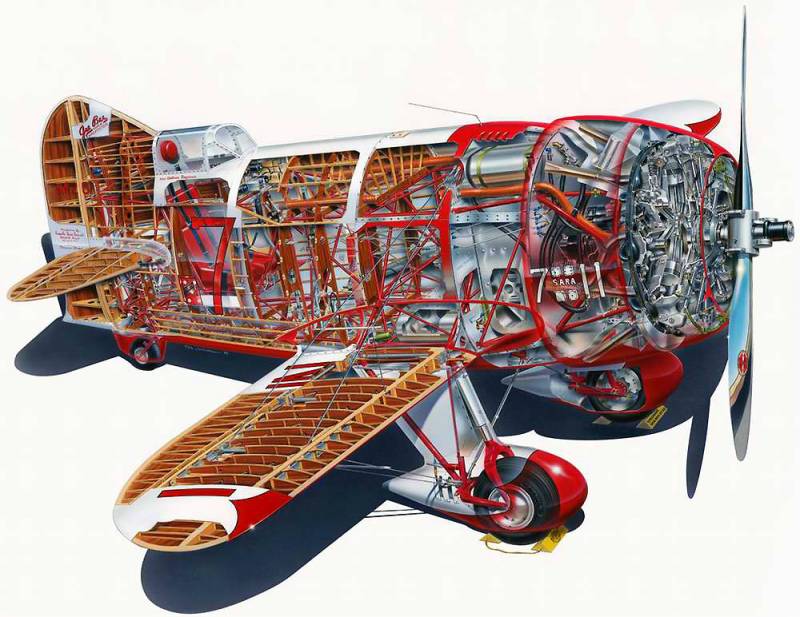 R-1 in a cut. It can be seen that the aircraft had a mixed construction with a wooden wing and plumage. 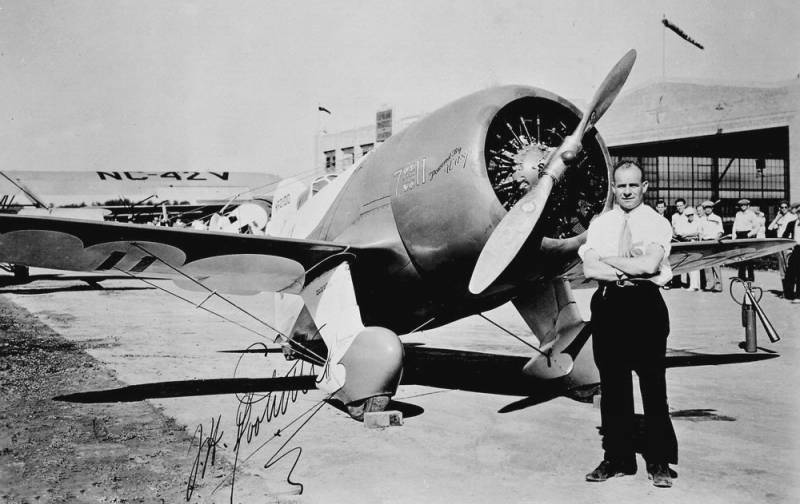 James Doolittle, who set the world speed record for JB. 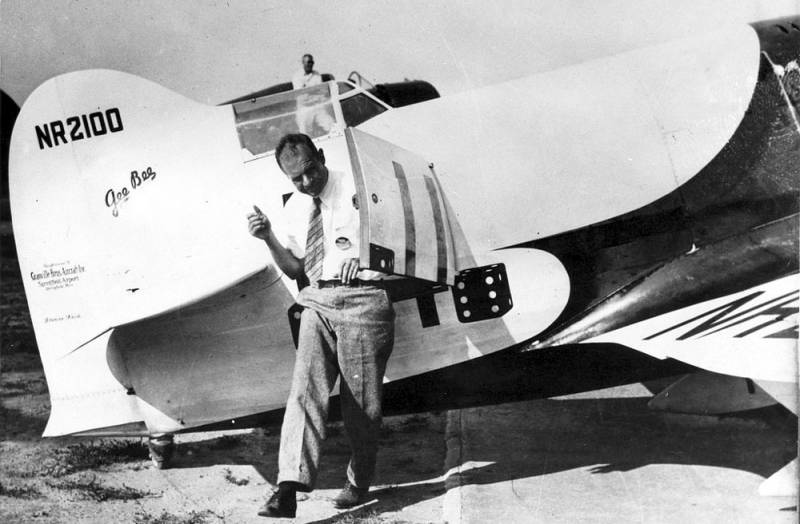 Doolittle gets out of the cockpit of the "JB" through the hinged door in the starboard. In an emergency, the door was dumped, but the pilot Russell Boardman, who crashed on this machine, did not manage to use the parachute. 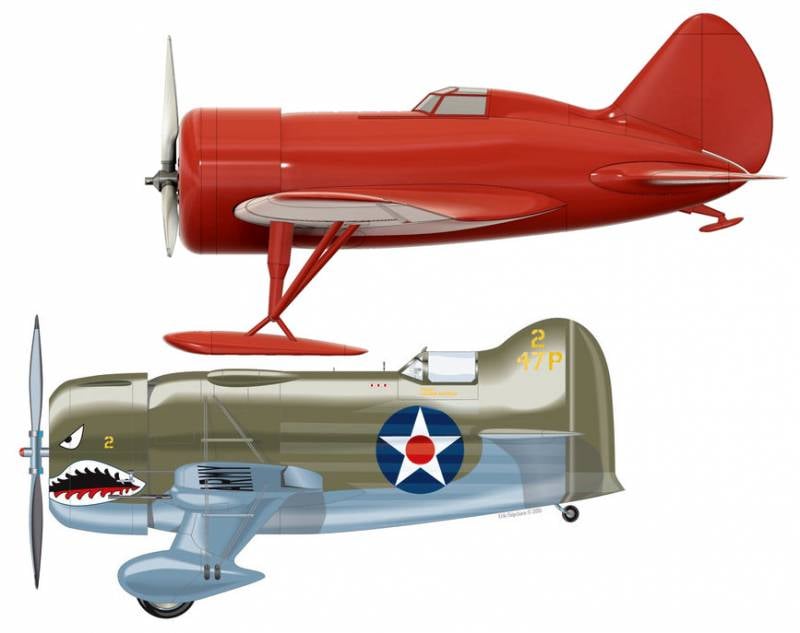 TsKB-12 and the American fighter P-45, made on the basis of "Bi Bi". However, the bottom picture is just an artist’s fantasy, since military modifications of “GB Bi” never existed even in the project.