August 16 2017
31
The newest British Navy aircraft carrier HMS Queen Elizabeth completed the first test series and arrived at the future home port and moored in the harbor of Portsmouth. 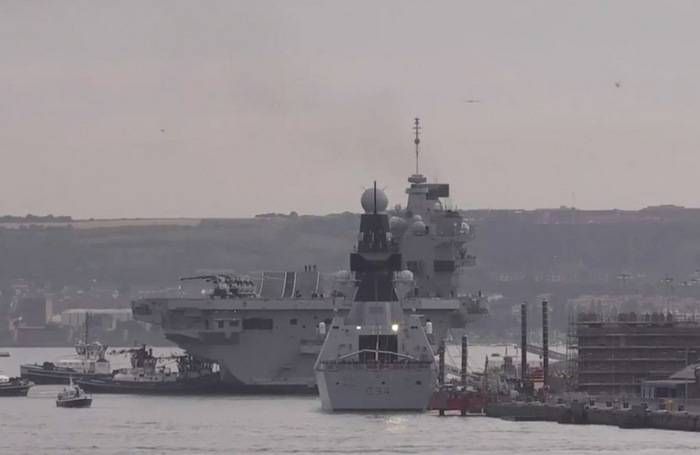 June 26, the largest ship of the British Navy, left the dock of the Scottish shipyard Rosyth and left for the open sea. The construction of the giant aircraft carrier took nine years, while its full combat readiness will be provided only by 2020 year. During the tests, the crew of the ship took part in the Saxon Warrior 2017 military exercises together with the US aircraft carrier group led by the nuclear aircraft carrier USS George HW Bush. The maneuvers were held from 1 to 10 in August in the North Atlantic Ocean - the crew of HMS Queen Elizabeth was able to practice on the American aircraft carrier, and the pilots made flights between the ships.

HMS Queen Elizabeth - the lead ship of a series of two of the newest British aircraft carriers. The queen's wing will consist of F-35B Lightning II fighter-bombers and Merlin helicopters (up to 40 machines with the ability to expand the wing to 70 units), in addition, the aircraft carrier will be able to carry attack and heavy military transport helicopters, as well as V-helicopters. 22 Osprey. The base wing will consist of 12 F-35B, the crew - less than 700 people (plus 300 people from the composition of the wing), with full combat readiness of the ship can accommodate up to 1600 people, reports "Warspot".