“Where the Russian flag is raised once, it should not descend there” 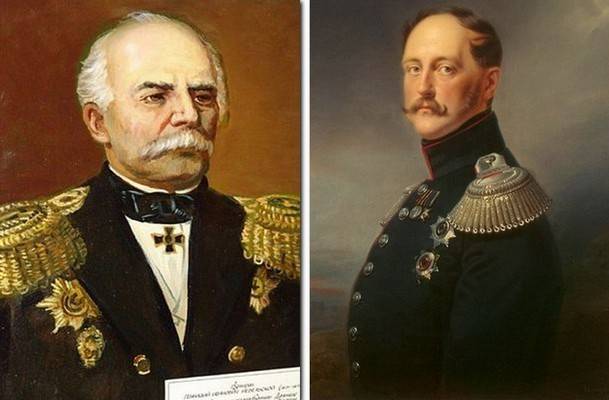 August 13 1850, at the mouth of the Amur, captain Gennady Nevelskoy hoisted the Russian flag and founded the Nicholas Post

The rich Amur region has long attracted Russian immigrants. The first Russian settlement on the Amur, Albazin, appeared in the middle of the XVII century.

In 1684, the Albazin Voivodeship was formed here, the eastern border of which passed along the Zeya River. In spite of the fact that the Chinese, who besieged the Russian fortresses of Albazin and Nerchin, and imposed on the Russian kingdom in 1689 a contract by which the developed territories of the Amur region departed to China, did not allow colonization of these territories, the Russians could not be stopped in the Pacific.

At the end of the XVII-beginning of the XVIII centuries, settlers began to appear on the shores of the Sea of ​​Okhotsk, they founded the cities of Okhotsk, Petropavlovsk-Kamchatsky, and the active development of the Far East began. But Amur, the only waterway connecting the Far East with Siberia, was not used.

It was not known how the river flows into the Pacific Ocean, and whether vessels from Pacific ports can enter. The development of the Amur Basin was hindered by the Chinese, and the Russian government, which did not want conflict situations with its neighbor, did not equip a full-fledged research expedition.

In 1845, only one brig "Konstantin" was sent to the expedition, but the crew did not manage to determine the mouth of the Amur, moreover, the wrong conclusions of commander Peter Gavrilov almost turned against us. Emperor Nicholas I ordered to stop the research of Amur as useless. And only the enthusiasm of individuals who decided to continue the research allowed to open the mouth of this Far Eastern river.

Among these persons, the captain of the 1 rank Gennady Nevelskoy, with the support of the governor of Eastern Siberia Nikolai Muravyov, in June 1849 from the Peter and Paul port of Kamchatka on the ship “Baikal” he set off.

1 (13) August 1850, at the mouth of the Amur River, on Cape Kuegda, he founded the military-administrative settlement Nicholas post, named after the living emperor, and hoisted the Russian flag at his post.

"On behalf of the Russian government, the sim is announced to all foreign ships sailing in the Tatar Strait, because the coast of this bay and the whole Amur region to the Korean border with Sakhalin Island are Russian possessions ... "

Under the command of topographer Peter Popov, 6 sailors were left, subsequently the Nikolaev post grew in Nikolaevsk-on-Amur.

The foundation of the post did not contradict the Treaty of Nerchinsk, because one of its points said: “... to the rivers flowing from the north side of the Amur and in all directions north of the Khingan Mountains even to the sea with a long life under the power of the Czarist Majesty of the Russian state ...”

Only geographical ignorance did not allow the Russians to come here earlier. Did not know about it in St. Petersburg. The “self-rule” of Captain Nevelskoy could threaten him with very big troubles, since his actions ran counter to the Far Eastern policy of the Ministry of Foreign Affairs. The head of department, Karl Nesselrode, proposed to abandon the Amur basin and permanently transfer it to China.

However, the political will of the emperor turned out to be stronger than Nesselrode’s ideas, he called Gennady Nevelsky’s deed well done, and on the report of the Special Committee considering this case, he wrote:

“Where the Russian flag is raised once, it should not descend there.”

China’s plans to colonize these lands were buried, and more recently, after the Cossacks left Albazin, China made loud statements:

"Lands, on several thousand li, lying on the [slopes] of Khingan facing the Middle State, beginning in the far north, and deserted, will entirely belong to the Middle State."

But the act of Nevelsky, approved by the Russian autocrat, and the negotiations on the territories that followed soon, which ended with the signing of the Tianjin and Beijing treaties, put an end to this question.