August 16 2017
12
AEC became the next heavy wheeled armored vehicle of the British army, which was created and actively used during the Second World War. The AEC differed from other combat vehicles in that it was developed on an initiative basis by engineers of the automobile company of the same name under conditions when the British army was already preparing to use other rather powerful cannon armored vehicles produced by Humber and Daimler. Despite this, the development of the Associated Equipment Company (AEC) was able to make them worthy of competition, remaining in service with the British army until the end of the 1950-s, when the armored vehicles of the Second World War period were replaced by the new wheeled armored car Saladin.


The AES armored car was created by the specialists of the Associated Equipment Company on its own initiative without any interference from the state. At the same time, the designers of the company tried to take into account the combat experience of using armored vehicles that had been accumulated by that time. The presence of armored vehicles of the same type did not confuse the AEC engineers at all. Confidence they gave the chassis of its own design, borrowed from a very successful artillery tractor "Matador", which managed to confirm their high road performance, including in combat conditions. In addition, one of the main tasks that the creators of AES heavy armored vehicles set themselves, was not only active reconnaissance, but also the fight against enemy armored vehicles and infantry. The concept of creating a new car envisaged that it would be used together with lighter armored vehicles, giving them fire support on the battlefield. Focusing on these requirements, AES engineers designed an interesting and quite successful armored car, which stood out for its original hull shape, which had a rather narrow profile and very powerful armor.

Tests of a prototype heavy armored car AEC Armored Car were carried out in 1940 year, after eliminating the deficiencies identified during the tests, the design of the armored car was ready for adoption. The debut of the new war machine in public fell on 1941 the year when it was demonstrated to British officials as part of the parade of horse guards in London. This parade was also attended by British Prime Minister Sir Winston Churchill, who drew attention to a new model of armored vehicles that he did not know and appreciated. As a result, in June 1941, AES received the first order for mass production of a new armored car of its own design. 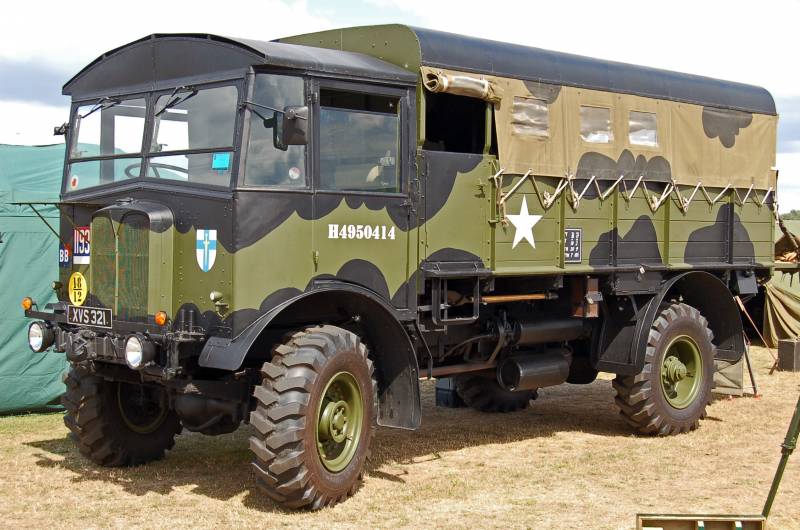 Artillery tractor AEC Matador
As noted above, the base for the new British combat vehicle was the all-wheel drive chassis with the 4x4 wheel formula, borrowed from the AEC 0853 Matador artillery tractor. This tractor is well proven in the army. It was mass-produced from 1938 to 1953 year, during which time more than 9000 cars of this type were produced in the UK in various versions.

The body of the new armored car was made of sheets of rolled steel armor, which were attached to the frame mounted on the chassis frame using riveting. The frontal armor of the hull was up to 57 mm thick, the side armor was 16 mm, the roof of the hull was armored with 32 mm steel sheets. On the roof of the hull in its middle part was placed a tower from a serial infantry tank “Valentein,” the standard weapons set was kept in the tower — a 2-pound (40-mm) OQF Mk IX gun and a 7,92-mm Besa machine gun paired with it. In the vertical plane, the gun could be pointed in the sector from +15 to -15 degrees, and, strangely enough, the gunner’s shoulder was the “drive mechanism”. At the same time, in a horizontal plane, the tower rotated 360 degrees already with the help of not electric power, but brute force.

For aiming 40-mm guns at the target, the gunner had a telescopic sight N 24x1,9 Mk V. As an auxiliary weapon, which could be mounted on a special bracket and used for firing at air targets, AES armored vehicles were equipped with an 7,7-mm Bren machine gun. The loaded ammunition included 58 shots for the gun, 2950 ammunition for the machine gun paired with it, and also 600 ammunition for the Bren 7,7 mm machine gun. Also on the armored vehicle could be installed 50,8-mm smoke grenade launchers, to which the crew had 18 grenades. 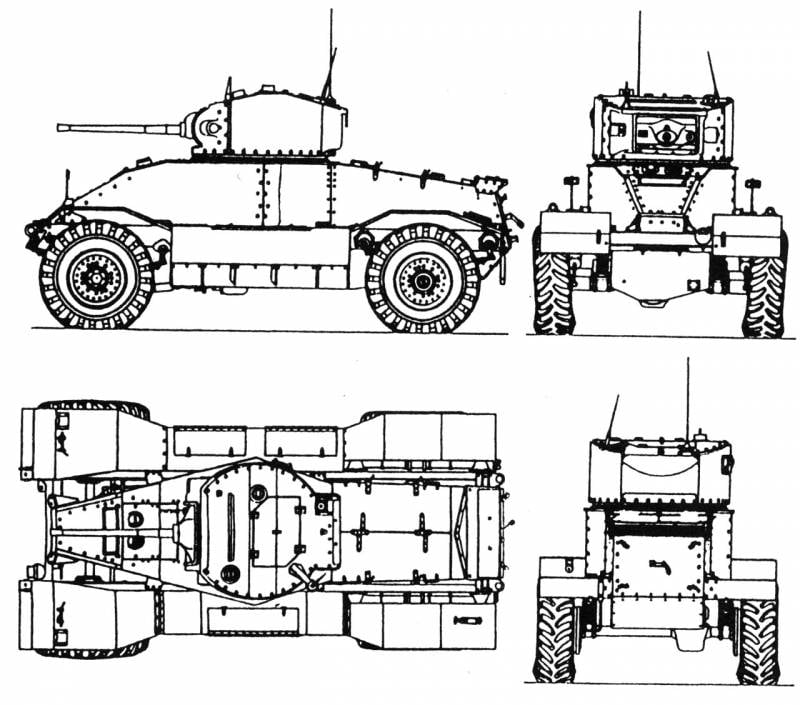 Scheme armored car AEC Armored Car Mk I
The AEC Armored Car driver was located in the middle in front of the hull, he actually sat between the two front wheels. The car seat could be adjusted in height, so when moving with the hatch open, the driver’s head could protrude from it. In the combat position, the hatch was closed, and the seat went down, and the driver followed the terrain using periscopic observation devices.

In the middle part of the hull and the tower there was a fighting compartment in which the gunner’s seats (to the left) and the commander of the combat vehicle (to the right) were located. For landing and disembarking from the armored car in the roof of the tower were located two hatches of rectangular shape. The lid of the commander’s hatch was two-fold, with one of the wings opening to the front and the second to the rear. The gunner's hatch cover was made whole, it was reclined to the left. Radio stations №19 were installed as a means of communication on all armored vehicles.

In the stern of the armored car was located the engine compartment. The 6-cylinder diesel engine of AES A195 liquid cooling engine was installed here, at 2000 rpm it could reach maximum power in 77,2 kW (105 hp). This allowed a fairly heavy combat vehicle weighing about 11 tons to move on hard-surface roads at speeds up to 58 km / h. We are talking about the modification of the Mk I, on subsequent modifications put more powerful engine, and the maximum speed increased to 65 km / h. The transmission of torque from the engine to the wheels, as well as the chassis control, was carried out using a transmission, which included: a four-speed gearbox, single-plate dry friction clutch, a two-speed demultiplicator, final drives, and air brakes. Suspension on semi-elliptic leaf springs and fairly large wheels with 13,5-20 tires size inches ensured good performance for the armored car. When driving on paved roads, the rear pair of wheels could be turned off, with the result that the armored car turned into a front-wheel drive with a wheel formula 4 x2. 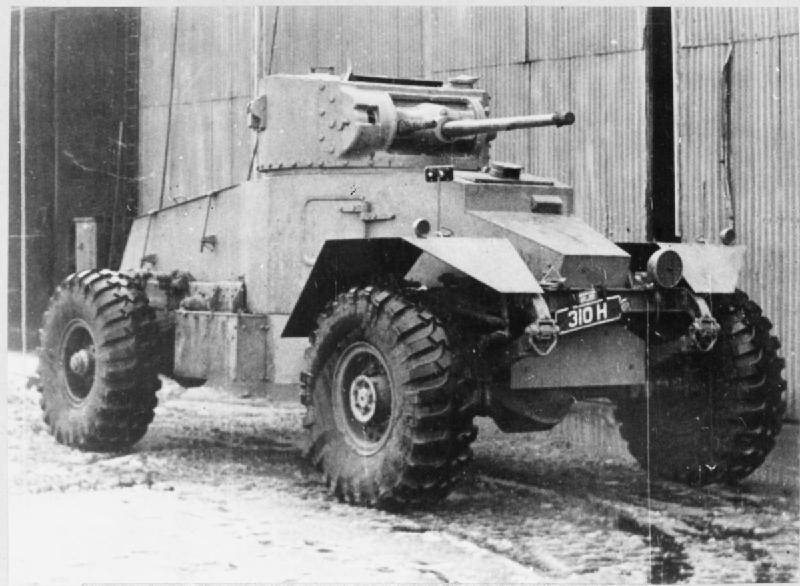 AEC Armored Car Mk I
Beginning with the 1942 of the year, the Associated Equipment Company launched the 122 armored car of the above construction, all of which received the designation AEC Mk I. They came to the front at the end of the 1942 of the year. Since this type of armored vehicle was relatively small, and their armor and armament corresponded to medium tanks, the military often used them as a means of fire enhancement, as originally intended by the designers. The platoons of armored vehicles of the British army were completed by them at the rate of one AES per platoon of Humber armored vehicles.

After a short time, combat experience demonstrated that the British infantry is in serious need of an even more powerful means of fire support in the face of armored vehicles interacting with them. The experience of fighting in North Africa showed that the 40-mm cannon, inherited from the Valentine tank, is able to fight only with enemy light armored vehicles, and its effectiveness against infantry was extremely low. By the time the AEC Mk I appeared on the battlefield, the Germans already had a large number of medium tanks Pz.III and Pz.IV, equipped with long-barreled 50-mm or 75-mm guns, and also received an enhanced reservation. In order to adequately withstand these tanks on the part of the AEC Mk I directly in the field by the British installed 6-pound gun (57 mm) from the tank "Crusaider III".

Thus, the combat experience and demands of the British military pushed the engineers of AES to create a new modification of the armored vehicle, which received the designation AES Mk II. It differed from the first version by changing the design of the forward part of the hull and the new turret in which the 6-pound (57-mm) OQF Mk III gun and the 7,92-mm Besa machine gun were paired with it. The mass of the new combat vehicle grew to 12,7 tons, and the crew was increased to 4-x people. To compensate for the increased mass of the armored car, a more powerful AES A197 diesel engine was installed on it, which developed the power in 158 hp. The installation of this engine allowed to increase the maximum speed to 65 km / h when driving on paved roads. 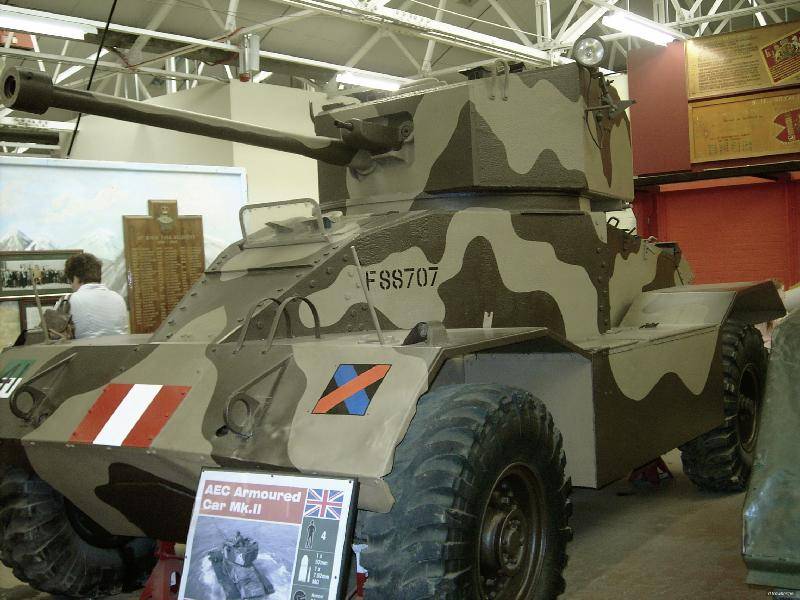 AEC Armored Car Mk II
The need to further strengthen the firepower of an armored car to solve the tasks assigned to it on fire support of infantry and combat enemy armored vehicles led to the appearance of the latest serial modification under the designation AES Mk III. Compared with the previous version, the new heavy armored car received minor changes in the hull design, the main difference was the installation of the MZ tank gun in the turret of the American 75-mm tank, which allowed the armored car to hit the enemy’s medium tanks. In addition to it, there was a powerful enough 75-mm high-explosive fragmentation projectile M48, which allowed to fight the enemy’s infantry and light field fortifications.

In combat, AES armored vehicles have been used since the end of 1942, making their debut in the North African theater of operations. In the summer of 1943, they were used during the Allied landings in Sicily and later in battles in Italy. Then new modifications of the Mk II and Mk III went into battle. At the same time, in the British units, Humber armored vehicles, which were supposed to support AES armored vehicles, were supplanted by more modern American “Staghound” armored vehicles, but the acquisition of subunits and the tactics of using AES remained unchanged. Despite a decent weight and large size, in the troops this armored car was loved for a very powerful reservation for this class of military equipment and good armament, which in some cases made it possible to use them instead of tanks.

A total of 1942 1943 year in England produced 629 heavy AES armored vehicles of all three modifications. Also in 1943, an attempt was made to create a self-propelled anti-aircraft gun on the basis of this armored vehicle, but the work on it did not leave the prototype stage. During the Second World War in 1944-1945, several AES armored cars were transferred to the People’s Liberation Army of Yugoslavia, in which they were used for more than 10 years. After the war, part of the armored vehicles was also sold to Lebanon, in which they remained in service until the 1976 year. 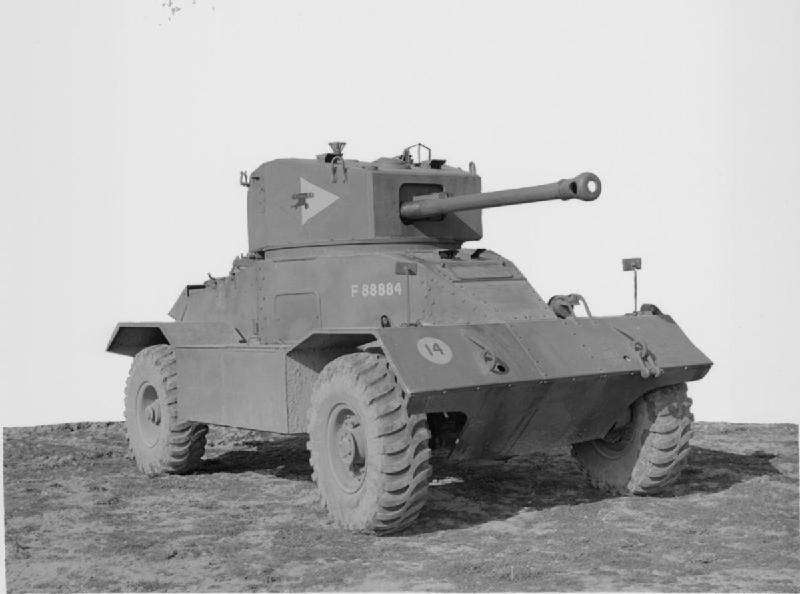