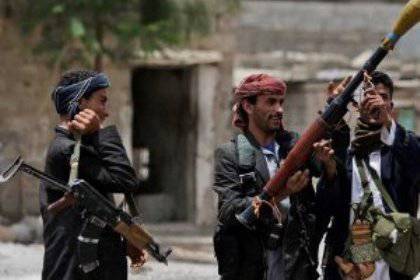 Arab foci of fighting is becoming on the world map more and more. Libya continues to blaze, drawn into the bloody feud, do not silence shots in the streets of Syrian cities, the confrontation between the government forces of Yemen and al-Qaeda fighters is becoming more violent. At the same time, it is in Yemen that the collision of regular army units with terrorists takes on the character of large-scale battles. Not so long ago, al-Qaeda leaders in Yemen had planned a truly large-scale operation to attack a government military base, as a result of which more than two hundred Yemeni soldiers were killed and several dozen captured.

By the way, attacks by terrorist groups clearly became more frequent after the departure of former President Saleh. Even before his resignation, Saleh said that his departure could trigger the activation of gang formations. This once again confirms the thesis appeared not so long ago that the export of democracy today can be identically equated with the export of terrorism. Today, Yemen, along with Afghanistan, is considered the real stronghold of Al-Qaida, which here allows itself not just single attacks, but the real military operations, having a reliable rear in the form of captured under the control of the territories.

Many citizens of Yemen suspect the outgoing Saleh that it was at his suggestion that the terrorists became more active. But such accusations can hardly be called wealthy for a number of reasons. Firstly, during the presidency of Saleh, al-Qaeda often organized attacks not only on individual objects, but on entire cities. Secondly, then the head of any Arab state that befell the “Arab spring” can be blamed for links with terrorists, because it was after and during these springs that the level of terrorist threat repeatedly increased in Egypt, Libya, Yemen and Syria.

After an al-Qaeda terrorist attack on the Yemeni military base, the local command decided to strike back. At the same time, not only Yemeni Air Force planes appeared in the skies of Yemen, but also the drones of the United States Air Force. It was a strike from the board of American UAVs that killed about three dozen al Qaeda terrorists, who by this time had firmly settled in the south of the country.

Under the conditions of ongoing military operations, the already fragile Yemeni economy suffers. Today, Yemen is considered one of the poorest Arab countries, and the confrontation of the new authorities with al Qaeda may be the first to be too tough without external interference. And external intervention is taking place, but instead of regular active military assistance from the West, American and French oil companies are trying to master the territory of Yemen. It would seem, how in such conditions, when a large percentage of the country's territory is under the control of the main terrorist force in the world, can we develop old oil fields and search for new ones? At the same time, a big mystery lies in why the same French from Total continue to work in Yemen in the literal sense of the word under a hail of bullets and against the backdrop of oil pipelines that explode, not without the help of terrorists, if, according to geological exploration, carried out in 90’s early Yemen is not nearly as rich in hydrocarbons as the neighboring Arabian states.

On this account there is one rather interesting opinion. It lies in the fact that in fact the French managed to conduct a new geological survey in Yemen, which showed that the local oil reserves are truly grandiose. This quite objectively explains the French craving for the Yemeni subsoil, even with such an objective threat as al-Qaeda. After all, if it were a penny benefit, then Total specialists, who have been working here since the late eighties, would have curtailed their “mission” long ago.
In connection with the possible content in the depths of Yemen of large hydrocarbon reserves, the wait-and-see attitude was also taken by the Americans. Today, when the United States is plunging into the abyss of the presidential campaign, starting a large-scale war with al-Qaeda in Yemen will be extremely costly for the American budget and little popular in American society. Obama can simply “go bankrupt” against the background of accusations from opponents that he is again trying to increase public debt on the basis of another major military operation. But to carry out the so-called stripping is quite acceptable.

At the same time, the United States does not intend to leave Yemen at all. After all, in addition to the hypothetical huge oil deposits, Yemen has one more trump card, and this is far from hypothetical. This trump card can be called the Strait of Bab el-Mandeb, connecting the Red Sea in the north with the Gulf of Aden in the south. This is a real strategic joker, because through the Strait of Bab el-Mandeb there is a route from Asia and Australia to Europe and back. One can imagine what dividends can be extracted from the control over the strait, because only Chinese, Vietnamese and Malaysian cargoes to the EU countries pass through it tens or even hundreds of billions of dollars a season. In such a situation, the Bab-el-Mandeb Strait for the United States can cover all their expenses, which they managed to spend on a military operation and are preparing to spend more. Of course, Washington will not openly talk about its control over these sea gates, but the new Yemeni President Mansour al-Hadi simply will have nothing left but to actually consolidate control over the strait to the United States.

As a result, it can be stated that the battle for Yemen has just begun. And its active phase will most likely begin after the presidential election in the United States.