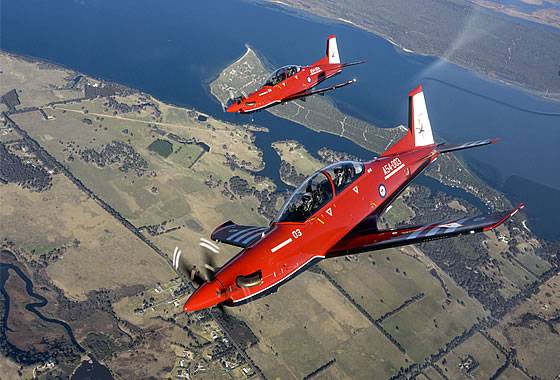 In December, the Australian Ministry of Defense 2015 signed a contract with Lockheed Martin Australia worth $ 863 million for the supply and maintenance of a flight training system based on TC-PC-21.

The agreement provides for the delivery of X-NUMX training aircraft PC-49 from Pilatus Aircraft, 21-M flight simulators, the creation of a flight training system, and logistical support during the initial seven-year period.

It is reported that "the supply system for the training of military pilots performs a consortium of" Tim 21 ", formed by Lockheed Martin, Pilatus and Hawker Pacific." The system provides for the provision of basic flight training at the East Sale airbase (Victoria), the creation of a training center, as well as the necessary infrastructure.

Preparation of cadets on PC-21 should begin in the first quarter of 2019. According to the Air Force, the new system will be in operation for about 30 years.