The Chinese are leaving the Russian Far East 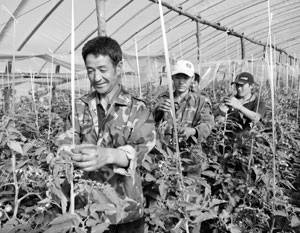 Extremely curious data appeared on the change in the structure of migration to the Russian Far East. Fears about the "settlement of the Far East by the Chinese" are increasingly becoming a myth - and this is due to the rapid enrichment of the PRC. Russians who are leaving the region are being replaced by completely different foreigners from much poorer countries.


Secretary of the Security Council Nikolay Patrushev, speaking at a meeting on national security issues in the Far Eastern District in Yakutsk, said that this year the number of migrants arriving in the district increased by 15%. In general, it amounted to 400 thousand foreigners.

This figure is especially evident against the background of the mass departure from the region of the actual citizens of Russia. “Over the past 20 years, the outflow of the indigenous population of the Far East amounted to almost 2 million people. This is almost 20% of the population of the macroregion, ”Patrushev quotes the portal of the Yakutia authorities.

Who exactly is arriving in the Far East instead of leaving Russians? One of the most common myths says that the Chinese actively inhabit these territories. But the facts are completely different.
“These are not Chinese, but, most likely, Central Asian migrants,” Alexander Gabuev, head of the Russia in the Asia-Pacific program at the Carnegie Moscow Center, told the VIEW newspaper. The economic situation in Central Asia has recently deteriorated, and therefore the migration flow from there to Russia is growing.

In general, the migration pattern in the Far East has changed: migration from neighboring China has been replaced by migration from distant Uzbekistan and Tajikistan. According to Gabuev, migrant workers from Central Asia took the first place in the Far East, followed by China, and then the DPRK. The expert says that with the naked eye it can be seen that there are more visitors from Central Asia in the region, although there were practically no such faces before, unlike, say, Moscow and St. Petersburg. “According to indirect data, there is a large influx from Uzbekistan and Tajikistan,” said the source. “Maybe it is a question of the redistribution of migration flows within Russia. Now he is going there more, and not to Moscow and St. Petersburg, ”he added.

But the number of Chinese in the Far East is declining, said Gabuev. He cites the economic crisis in Russia and the fall in the ruble exchange rate as the main reason. In addition, according to him, “structural aging” is taking place in China: the working-age population is declining, and gradually jobs in their own country become much more attractive than what can be found in Russia.

But the number of North Korean migrants is kept at about the same level, emphasizes Gabuev. At the same time, the sanctions announced by the UN Security Council on Saturday may lead to a halt of this flow, since it has forbidden to hire new guest workers from the DPRK. However, according to the interlocutor, it is not clear how they will be implemented. Gabuev noted that the migrants from the DPRK are in the same niche as from Uzbekistan or Tajikistan. “This is a cheap, disciplined workforce that local private owners can hire and which they can apply for state-owned construction,” he said. The Chinese are still more involved in projects with Chinese capital, in agriculture, at construction sites, and partly in trade, the expert said.

The influx of migrants from China is declining, agrees with Gabuev and the leading researcher at the Center for Korean Studies at the Institute of Far Eastern Studies of the Russian Academy of Sciences Kim En Un.

“Inside China, labor demand is growing rapidly. 10 years ago, China’s GDP was 700 billion dollars, and now it is around 13 trillion dollars. To produce such a quantity of products, we need workers. A lot of people who used to look for work outside of China find it inside the country, ”said Kim Yong Un to the VIEW newspaper.
North-east of China, which is just bordering the Far Eastern District of Russia, was previously considered problematic, economic development was lagging behind, but the situation is changing, Kim En Un pointed out. Everything goes to the fact that after 15 years there, on the contrary, there will be a serious shortage of labor, the expert believes.

The expert did not rule out that some illegal immigrants come to the Far East, even from Vietnam. “The population there is already more than 80 million, there are not enough jobs for them. Many people prefer to go abroad, ”said Kim. According to him, many Vietnamese go to Russia by the old memory, since connections from the Soviet times have been preserved.

However, citizens of the PRC, the DPRK or Vietnam “do not constitute a breeding ground for terrorism,” the source stressed, noting that this problem most likely concerns immigrants from Muslim countries. So Kim commented on Patrushev’s thesis that illegal migration, which the authorities haven’t succeeded in reducing, “still threatens public security, is a breeding ground for terrorism, cross-border crime, criminalizes economic relations,” the Security Council secretary said, noting as an example more and more frequent cases of use of forged documents by migrants, fictitious registrations.

Earlier, the Commissioner for Human Rights in Russia, Tatyana Moskalkova, noted that illegal labor migration creates a serious tension in society. Prosecutor General Yury Chaika said earlier that the centers for the maintenance of illegal migrants were overcrowded due to the underfunding of the deportations. Recall that at the end of last year, RBC reported that the increase in migrants, according to official data, returned to the “pre-crisis” level of 2012 – 2013. By the beginning of this year, legally, there were more than 10 million foreigners in Russia, of whom one out of every four indicated his goal of being a job.

“In the Far East, if we take the federal district, 6,2 million people live. How many migrants there are on the “permanent” is a big question, but 400 thousand is not a figure that should cause some kind of excitement

- believes Gabuev. “I don’t think this is any kind of danger at all.” The growth of illegal migration, the source stressed, is a question for the migration and border guards. However, in his opinion, this translates more into taxes not received by the budget from migrants working in the shadow sector than with some kind of demographic dominance of foreigners.

As for the outflow of the Russian-speaking population from the Far East, this is a structural problem, to which migrants are only indirectly related. “There is simply a structure of the economy such that few high-paying jobs, wherever a Russian person would consider it unreasonable to go,” said Gabuev. “Russians in Vladivostok do not sweep the streets and do not put roads, but at the same time many people complain about the absence of any work,” the interviewee concluded.