August 14 2017
16
The Pentagon’s Intelligence Directorate recently released a large report analyzing and evaluating the forces of modern Russian armed forces. Simple ways of fighting the Russians were also proposed. The report might seem like an interesting document if it didn’t have so many gaps. The experts could not count any Russians Tanks, nor aircraft, and also had difficulty in assessing the effectiveness of air defense. 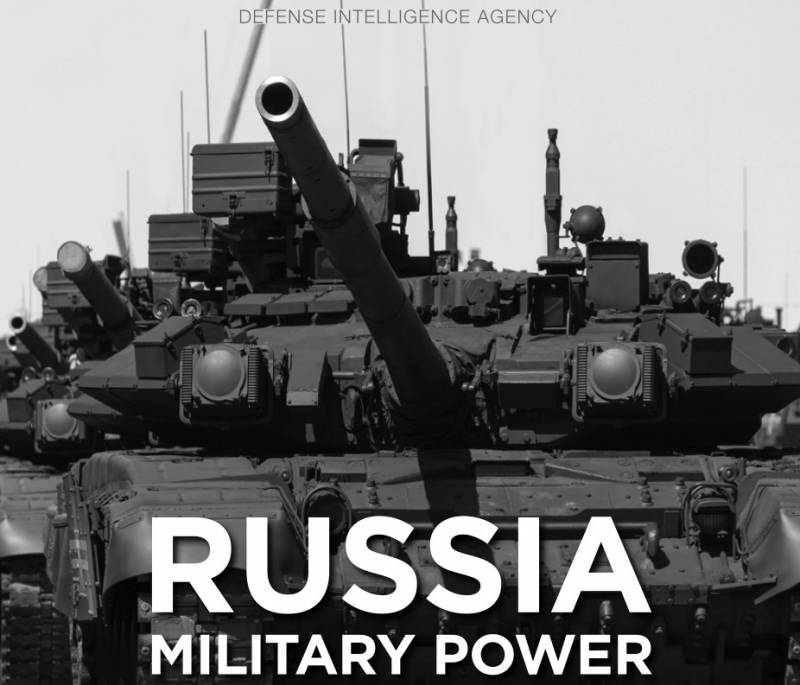 Fragment of the cover of the Pentagon scouts report (screenshot)

A report by the agency called The Pentagon's Defense Intelligence Agency (DIA) can be downloaded from the website. www.dia.mil.

Since the time of the USSR, management has for the first time been puzzled by this kind of assessment. In the future, the agency promises to release a whole series of reports with estimates of the military power of the opponents of the United States and to analyze the threats that the United States faces.

The report series is addressed to the “general public”. The latter should "understand more deeply the main threats to US national security" and also learn that military intelligence, in addition to Russia, is focused on four more missions: China, North Korea, Iran and transnational terrorism.

“These documents are designed to facilitate dialogue between the leaders of the United States, the national security community, partner countries and the public about the problems we face in the 21st century,” commented Lt. Gen. Vincent Stewart, director of the DIA.

The reason for the compilation of the first report was, as noted on the department’s website, “the revival of Russia on the world stage”. In this “revival”, analysts included “the seizure of the Crimean peninsula, the destabilization of eastern Ukraine, intervention in Syria and the formation of the information environment in accordance with its [Russian] interests.” All of this "represents a serious problem for the United States and its allies," and therefore "led to the development" of a document concerning the assessment of the "military power" of the Russians.

“In the period of the next decade, an even more confident and efficient Russia may emerge,” Mr. Stewart is sure. “The United States must anticipate Russia's actions, not just react to them, and seek a greater understanding of Russia's goals and the capabilities of the United States to prevent potential conflicts.”

DIA is not the first day to assess the power of the likely opponent. Defense intelligence first appreciated the Soviet military power in 1981. The report of that time was translated into eight languages ​​and distributed worldwide. Then the report was updated annually. So it was until the fall of the Soviet Union in 1991 year.

The “Russian” report focuses on identifying a “threat” from the Russian army, on assumptions about how dangerous the military machine of the Russian Federation is. The financial aspect of the assessment is also highlighted: the Americans state with satisfaction that the amount of money for the Russian military machine has gone down steeply due to the crisis and the fall in oil prices. 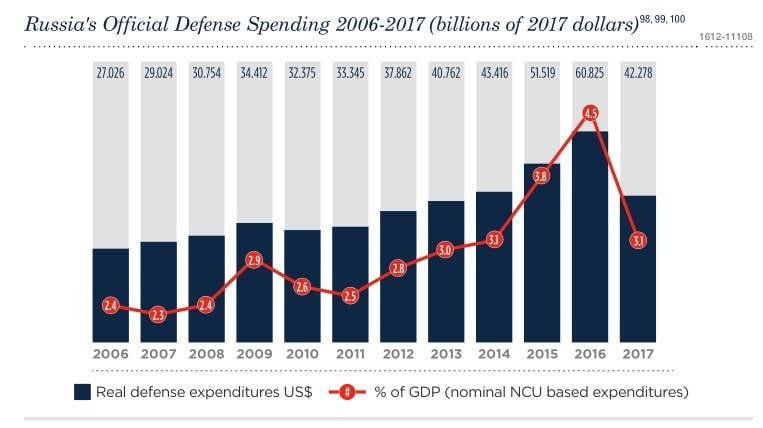 Estimated Russian defense spending in 2006-2017 (in billions of dollars and% of GDP, data from The Pentagon's Defense Intelligence Agency report; 2017 was an indicator budgeted for in the Russian Federation)

The current defense budget, unless adjustments are made to it, will be the lowest budget of the Russian Federation in the field of national defense since 2013. It is noted that the revenues of the Russian government are dependent on oil prices. In addition, according to the International Monetary Fund and a number of prominent world economists, Russia has faced a ceiling of its growth: the reason is the lack of structural reforms in the state. GDP in Russia is likely to grow by a bit, by 1%, by 2% per year, even if “oil prices increase substantially,” according to a survey report.

Defense intelligence, according to the American press, essentially revived the practice of the Cold War in 2017. The Office concluded that the Russian military, based on the Soviet legacy, write the current doctrine and modernize the existing opportunities left by Soviet Moscow. The dependence of the Russians on the old Soviet developments is one of the key points of the Pentagon’s intelligence report.

“The Russian military is based on military doctrine, structure and capabilities of the former Soviet Union. Although the Russians still depend on many old Soviet platforms, they were able to modernize their military strategy, doctrine and tactics, including the use of asymmetric means of war, such as cyber and mediated actions, that were observed in Ukraine, ”the DIA report stated.

Over the years that have passed since the collapse of the Soviet Union, the Russian army "atrophied to the pale shadow of its mighty Soviet successor," writes in "The National Interest" analyst Dave Majumdar (Dave Majumdar).

If the Soviet Union abandoned the use of nuclear weapons first, then the “new Russia” just relies on these weapons in order to “compensate for its inherent weakness” militarily. At the same time, Russia is trying to reduce its dependence on nuclear weapons by restoring its traditional military forces and adopting modern precision-guided munitions.

“One of the biggest obstacles for Russia after the collapse of the former Soviet Union was the need to rely heavily on its nuclear forces to prevent aggression, which led to the voiced readiness to be the first to use nuclear weapons,” the DIA report said.

In the long run, Russia seeks to once again become a great power, as it was during the Russian Empire, and then in Soviet times (unless the DIA estimates are wrong, ironic Majumdar). According to experts, Russia is eager to become one of the leaders in a multipolar world and regain the status of a “great power” that it had from tsarist times to the last days of the Soviet Union. Such a goal requires forces capable of deterring aggression, fighting a whole network of conflicts (from local crises to nuclear war), the ability to project power and use force when necessary to intervene in conflicts around the world.

Despite the economic downturn that affects the modernization of the Russian army, Moscow still creates modern forces that can compete with the enemy and maintain the status of a "great power." The long-term goal of Moscow, indicated in the report, is to create an army ready for any conflict: from a local war that broke out from the spark of a regional conflict to a strategic conflict that could lead to an exchange of nuclear strikes.

In general, according to Majumdar, the DIA's analysis, as well as previous assessments of the Soviet military forces of the Cold War, is characterized by its “frantic” character. Only time will tell how accurate this analysis is. After the collapse of the Soviet Union and the end of the Cold War, Americans found out, the analyst recalls that the Soviet Army was clearly overestimated: the reports often contained "gross exaggerations."

In the new report, we note, the authors tried to avoid such exaggerations. Perhaps that is why the intelligence report does not have enough accurate data.

This was noticed by analyst Alexander Sitnikov in "Free Press".

Americans, he writes, nothing is known about the number of Russian special forces and special operations forces. In addition, Pentagon scouts "are desperately trying to understand" how the logistics units of the military work. Finally, the Americans lack information "in all areas of the current state of the Russian armed forces."

1. The report states that it’s impossible to understand how much the main battle tanks T-72B3 in the Russian army really are.

3. The air defense system "appears" to be an overly mobile part of the army, while "it is unclear how the integrated air defense system is controlled in order to assess its potential for opposing how the US prefers to wage war," the analyst quotes the report.

4. The “sustainability” of the Russian Armed Forces is also a question for DIA experts. True, they note that Russia has succeeded in increasing the proportion of contract servicemen in the armed forces vis-à-vis conscript soldiers.

Researcher Kennanovsky Institute at the Center. Woodrow Wilson Michael Coffman noted the weak DIA analytics, performed at the level of "third-rate military portals," writes Sitnikov. There are hundreds of references to Russian journalists in the intelligence report, even ... to Wikipedia. There is also a lack of maps, graphics and photographs that would objectively reflect the aforementioned “Soviet military might”.

Cherry on the cake is the withdrawal of intelligence officers: Washington seeks to carry out a regime change in Russia in its own interests. For the sample is taken Ukraine. Based on the experience of Kiev, Sitnikov notes, Washington is looking for an opportunity to do "the same thing" in Moscow.

The new report, equipped with a long “prologue”, where the military force of Russia is viewed retrospectively from the 1991 of the year to the present, can be considered a prelude to the next “plays” of Pentagon’s scouts rather than a serious assessment of the power of a strategic opponent. The impossibility of counting tanks and airplanes and obvious difficulties with the analysis of the supposed effectiveness of air defense put the DIA report at the level of a journalistic review with pictures and the repetition of the words “power”, “threat” and “nuclear weapon”.

The forecast alone does not doubt Pentagon’s intelligence experts. Russian spending on weapons modernization and army development will inevitably fall: the country's economy is weak, structural reforms are not carried out, oil is still cheap. And in such conditions, you should look at the possibility of "Maidan" in Moscow. According to the Kiev script.