August 12 2017
15
Adopted more than 50 years ago, the concept of building sonar systems does not provide for the long-range detection of potential enemy submarines. There is a way out of the dead-end direction, but for this it is necessary to move from the traditional amplitude to the optical difference method of converting sound information.


Measures taken in recent decades to reduce the intrinsic noise of submarines led to a shift of the spectrum to the frequency range below 17 hertz. It became “smooth”, individual signs disappeared from it. As a result, the detection range of the submarines by the national hydroacoustic complexes (GAK) fell to three or four kilometers. Providing the required detection range of safety in 200 – 300 kilometers with the current state of technology is a problem.

The first large-scale underwater monitoring system was SOSUS, deployed by the Americans on the Atlantic and Pacific oceans in the early 70's. It was designed to determine the location and motion parameters of nuclear submarines using a cable network of hydrophones laid along the bottom. Data is continuously being received for processing by coastal anti-submarine centers located on the western and eastern coasts of the United States. SOSUS was equipped with piezo-ceramic hydrophones. The first experience of its operation led the operators to the delight - Russian submarines acquired the nickname “roaring cows” from the Americans. However, as a result of measures taken by us, the noise spectrum of submarines was moved to the infrasound area, and the methods used for receiving and processing hydroacoustic information were unsuitable for work in the low-frequency range.

But not only the detection system became deaf - the same happened with the boats, because the GUS were created according to the same principles. The best illustration was the emergency in the night from 3 to 4 February 2009. At great depths in a calm environment in the central part of the Atlantic Ocean during combat duty, two of the most advanced nuclear-powered submarines of the British and French Navy, the Vanguard and the Triumphant, collided. The two newest submarines of the leading NATO countries, despite the modern sonar equipment, did not see each other even at close range due to the low level of noise emission. 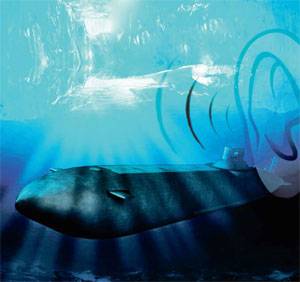 Our situation was even worse. In the public domain there is information about the collision in 1992 of the American submarine Baton Rouge with the Russian Kostroma in the Barents Sea. Our submarine was on the training ground near the Rybachy Peninsula. At the next ascent to the periscopic depth, a blow rang out - the cutting of the Kostroma crashed into the hull of an American nuclear-powered ship, whose presence near Russian territory went unnoticed. Moreover, it was in this area that there was a sonar reconnaissance station. On the shelf there were hydroacoustic antennas about a hundred meters long, installed along a dump of depths. To imagine the dimensions of these structures, it is enough to say that each of them was held at the bottom by two anchors weighing 60 tons each. Hydroacoustic information was transmitted by cable to the coastal observation station. We are aware of the existence of a number of stationary systems for monitoring the hydroacoustic situation - Dniester, Volkhov, Amur, Liman, and North. To the North the fleet belonged to a post on the island of Novaya Zemlya, tied to a stationary SJSC Sever. But, as Rear Admiral Sergey Zhandarov believes, “today this complex is outdated. On its basis, another serial system with modern communication elements was developed. ”

How to reduce the noise of submarines? It is worth noting the transition of American submarines to a single-shaft propulsion system, increasing the diameter of the propeller to eight meters with a decrease in the number of revolutions to 100 per minute, bringing the number of blades to seven and giving them a special saber shape. These measures have led to a significant reduction in noise radiation.

Note that 100 revolutions per minute of the propeller shaft corresponds to the radiated frequency of the order of two hertz. Accordingly, the sea is more than 60 decibels louder than a submarine.

There are examples of successful noise reduction and domestic shipbuilders. "Varshavyanka" was the most modern and low-noise diesel-electric submarines of the domestic fleet. In its power plant includes two diesel generator. If the old types of boats on the surface went under diesel engines, saving electricity, then "Varshavyanka" and in the surface, and in a submerged position, move only under electric motors. There are several of them: main, power 5500 horsepower, economic course –130 horsepower and a pair of 102-strong reserve. All of them work on one propeller - six-blade, with revs up to 250 per minute. Low-magnetic steel, retractable steering wheels, shock-absorbing platforms for engines, special external acoustic acoustic coatings - all this provides the boat with maximum sound insulation, invisibility and, in general, makes it much more difficult for the enemy to detect. And in the driving mode on electric motors, the Varshavyanka becomes completely inaudible and is able to sneak up on the desired goal almost closely.

Modern submarines of the US Navy, when moving underwater at a speed of about eight knots, have a noise level of 120 – 130 decibels, whereas the first production submarines are 160 – 170 decibels and more. It can be seen that the measures taken led to a decrease in the index by about 40 decibels. The noise of the newest American submarines with water-jet propulsion of the C-Wolfe and Virginia classes is not distinguishable by operators at all.

Traditional domestic SAS provide signal conversion in the region of medium sound frequencies. Therefore, it is impossible to detect a submarine using the existing reception technique, for noise at a frequency of two hertz - and this is an infrasound. From which follows the conclusion about the need to improve the efficiency of signal conversion in this part of the range. This opportunity provides an optical differential method of conversion.

At the Virginia submarine, fiber-optic laser excitation hydrophones are installed operating in the 10 – 480 hertz range. The basis of the hydrophone is a laser with a wavelength of the order of 6328 angstroms, which feeds two coils of quartz optical fiber up to 40 meters in length. The impact of the acoustic signal leads to a relative deformation of the coils, to the modulation of light at the output of the circuit and to the selection of the difference signal. The conversion efficiency of the 40 decibel is higher compared to piezo-ceramic hydrophones and does not decrease with decreasing frequency. The main difficulties in creating such a system, obviously, were in excluding sources of their own instabilities that are outside the accepted range for consideration. How time-consuming this process can be understood from the fact that the development was started by the NRL organization of the US Navy in 1979, and only to the 2014 year, after 35 years, very little information about the use of such hydrophones began to appear.

To ensure reception in the low-frequency region of the spectrum, we also need a revision of the existing basic positions of signal conversion. We cannot rely on the fact that we can get a technical solution of this issue in the West. It should be noted in particular that the probable adversary is thoroughly gaining dominance in the ocean by conducting a campaign to reduce the noise of submarines and develop means for receiving signals in the infrasonic range.

In such a situation, one of the most pessimistic predictions is given by Rear Admiral Sergei Zhandarov: “In 90, the Navy was given the task of fighting foreign submarine rocket carriers in the far sea zone. Now, apparently, it is necessary to shoot a similar task in their waters along multipurpose atomic submarines. But then the ships and submarines will have to ban access to the sea, there is nothing to do there without knowledge of the underwater environment. ”

To say that nothing is done, it is impossible. We talked about the deployment of the latest network, called "Harmony". These are robotic autonomous bottom stations (ADS), secretly installed by special submarines. At the depth of the DSA, stationary fixed multi-element and multimeter bottom hose hydroacoustic antennas are deployed. Stations can conduct passive reconnaissance by simply listening to what is happening around, trying to detect the characteristic noises of the nodes and mechanisms of ships and airplanes. According to the plan several ADFs are combined into a network capable of uncovering the underwater and surface situation on an area of ​​hundreds of kilometers. But in fact, the same piezoceramic hydrophones, which are of little use for receiving signals in the infrasound area of ​​effects, remain the main sensors of “Harmony”. So the desired “opening of the underwater situation on an area of ​​hundreds of kilometers” is not yet justified.

Domestic scientists are engaged in sensors based on optical differential conversion for stationary HAC, but the development is so laborious that there is no reason to hope for a quick technical solution.