August 8 2017
25
The United States intervened in the internal affairs of dozens of states, including Ukraine. It is not only about the approval of the activities of the opposition, overthrowing the government, but also about the direct support of various kinds of revolutionaries. At the same time, Washington is not tired of blaming Moscow for intervention. 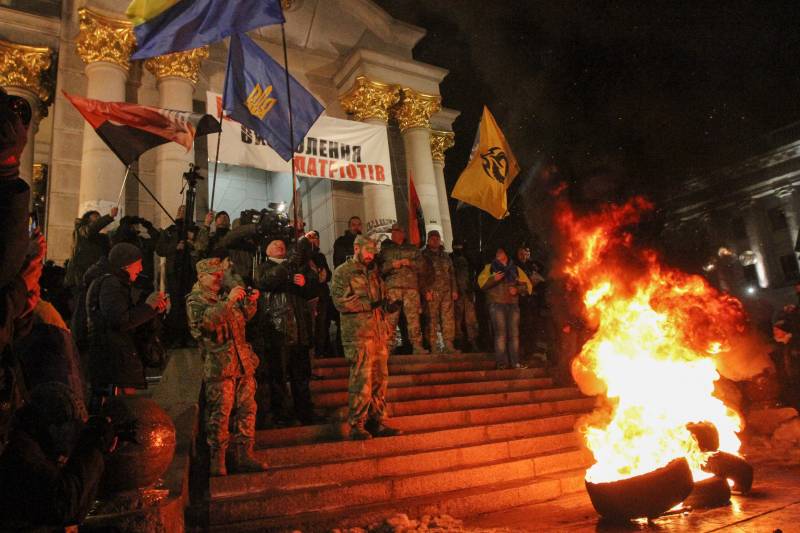 As writes in "The National Interest" Ted Galen Carpenter, in Washington, many are outraged by the so-called interference of Moscow in the American presidential election. Politicians are taking a variety of actions: from "investigations" to the announcement of anti-Russian sanctions. Some politicians have already agreed that Putin, they say, is leading a “war” against the United States. One figure of the “particularly angry” chamber of representatives compared the actions of Moscow with Pearl Harbor and the 9 / 11 terrorist attacks!

One way or another, this is an insult to Moscow or not, but Washington itself intervenes in the affairs of dozens of other countries. The journalist considers the most flagrant intervention by the US actions in Ukraine during the “euromaidan” period.

In 2014, the American elite made it clear to Kiev that it supported the protesters on the streets. This was done absolutely openly: the famous hawk senator McCain flew to Kiev personally and demonstrated “solidarity” with the “maydanschiki”. McCain even had a snack with members of the ultra-right organization Freedom, and then went on stage at Independence Square, where he stood next to Tyagnibok.

Victoria Nuland, at the time Assistant Secretary of State, also distinguished herself in Kiev. According to Mrs. Nuland, she visited Ukraine three times in the course of several weeks of “euromaidan”. Everyone remembers how she handed out protesting cookies to protestors.

The degree of intervention of B.H. Obama’s team in Ukrainian politics is found by the author of the material “extremely high”.

Russian intelligence managed to intercept, and then conveyed to the world media the content of the conversation between Nuland and US Ambassador Jeffrey Payette. In this telephone conversation, the couple discussed in detail the preferences about the composition of the new government in Ukraine. Nuland announced that “Yats [Yatsenyuk] is the same guy,” and he will be able to do a great job.

Carpenter recalls that in those days, Mr. Yanukovych was the legitimate president of the country. And it is amazing how state representatives, who reiterate their adherence to democracy and sovereignty, are practically openly planning to overthrow the president of another country and sit down their puppets in Kiev.

And there is nothing surprising in the fact that in Moscow they expressed dissatisfaction with unconstitutional actions of the USA: the overthrow took place clearly “with the help of” Washington.

American politicians accusing Russia of something should have remembered this before pointing the finger at the Russians. On the other hand, we note, it is hardly the Americans about the "Maidan" forgotten. However, “exceptional” Washington, in its own opinion, which it is time to inscribe in the American Constitution, does everything right, while all others are mistaken. Others are not mistaken only when they live on the orders of Washington.