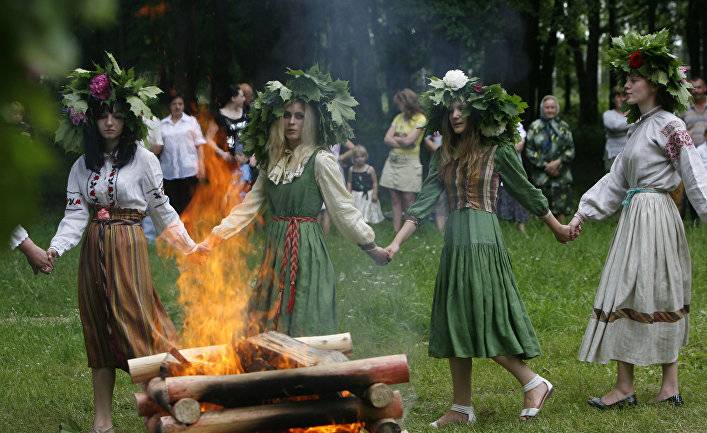 Many of those who worked in Western countries, argue that there is clearly felt a certain arrogance of the local population in relation to foreigners, more precisely - to people from Eastern Europe, and indeed to all Slavs. There are also those who did not go anywhere at all, but in all steps, statements and actions of the West he clearly sees his arrogance towards the world of the Slavs.

Of course, opponents may argue that all this is purely subjective perception. Therefore, let's consider the problem objectively, from the point of view of a scientist. Namely - Mr. Victor Timura, who is engaged in philosophy stories and published several books on this topic. Mr. Timur writes:

“For the West, the Slavs are still inferior and should serve him. The West has always treated the Slavs with hostility and intolerance. Therefore, we must finally understand that our character and our interests are at odds with Western ones.

The basic life principle of the West consists in expansion, aggression and parasitism on the riches of the conquered and enslaved peoples. It is precisely on this that the West has so far profited. Slogans about freedom, sovereignty, humanity and human rights are just a red herring, behind which lies aggression and expansion. And all this is led by the United States. Now the realization of this vital principle of the West is difficult. The West is facing problems and is in crisis. Therefore, its aggressiveness increases, expansion attempts are increasing. And again, mainly to the East.

Western principles of life and existence have always been alien to Slavs. The Slavic life principle is not based on expansion, aggression and parasitism on the material resources and natural wealth of the enslaved peoples, but on their own labor.

But the more the social system in the West decays, the more it is invested in expansive and repressive instruments. Professional, that is, hired, armies can win in marginal battles, but they will not win wars, because even numerous special forces cordons cannot prevent the destruction of a decaying society. ”

Mr. Timur, a historian who deals with the ancient history of the Slavs, also argues that the story that our children are taught in schools is purposefully distorted and is a Pan-German version of the real story. It was created by order in order to correspond to the political forces and interests of the West.

I will give a concrete example confirming the words of Mr. Timura. I mean the so-called Frankish merchant Samo, who allegedly united the Slavs and laid the foundations of the Great Moravian Power. Thus, we, Slavs, are allegorically given to understand that we ourselves were never able to rule, and that only a person from the West could unite us and rule us.

In our history, and in our modern times, there is a clear desire to suppress, detract and even ridicule absolutely everything that does not correspond to the Western idea of ​​superiority and exclusivity or does not accord with the political interests of the West.

The media, which play a decisive role in shaping public opinion, are under the control of Western owners and, therefore, obediently spread their propaganda. The public media are also subordinate to the imperial pretensions of the West, which provide airtime to those who degrade and denigrate all our own and national, highlighting, above all, European and generally Western.

Thus, the media only extol everything that is to the west of us. Conversely, the media blacks everything in the East. After all, there is a big Slavic evil empire! But in fact, her biggest sin is that she refuses to recognize the superiority of the West and does not allow her to plunder and plunder the country, unlike the Central European vassals.

A lot can be said about Russia and the Russians. For example, we can recall the Russian mafia or the Russian vodka, which they are drunk. Yes, Russians are by no means perfect and make many mistakes. But, in spite of everything, they have something extraordinarily valuable - something that other Slavic peoples have almost lost.

Unfortunately, today such a pathetic slaves and servants without a drop of their own pride are the overwhelming majority of our young people, admiring the West with all its opportunities that are offered to it. However, the depth and the very essence of this lie many centuries ago opened Aesop in one of his fables.

The wolf met a fairly well-fed Dog and asked how he had become so big and fat. "Man gives me food," replied the Dog.

“What have you got on your neck?” Asked Wolf.

"This is a trace of the iron collar, which the owner puts on me, putting on a chain."

Wolf grinned and said: “And for me it's better to live from hand to mouth than to sit on a chain. Freedom, I would not trade for any price! "

And exactly the same thing happens with our young people, as well as with everyone else who leaves for the West. Do they go for better work, more money to earn there, or a higher standard of living. And although they get all this, in fact, they always remain just fattened dogs, which the owners tie in their yard.

They will forever remain inferior, and they will graciously throw scraps from the master's table. This abundance is the result of parasitism on their own labor, as well as on the labor of their fathers and mothers who work at home for meager wages in slave barracks owned by Western owners. And parents work there much more and for a significantly lower salary, unlike employees of the same firms in the same positions in the West.

Where is our pride, Slavs? Have we really traded it for a full belly and for the leftovers from the master's table, which our slaveholders throw to us? Do we not sell this pride for the Jews of thirty pieces of silver, thereby only confirming in the eyes of the slave-owners their theory of our inferiority?

Is the one who is able to work hard really defective? Who is not aggressive? Who in his inner essence never sought to live in luxury? In luxury, which is not the result of their own work, and parasitism on others?

But such a person is not inferior! On the contrary, it is much more valuable! Because ultimately it does not matter at all who is from the West, and who is from the East! In the final analysis, it’s just who the person is! How he is decent! What values ​​recognizes! Does he rely on the fruits of his own labor and does he naively trust other people, or, on the contrary, is he living in prosperity, which neither he, nor his fathers or grandfathers did not deserve by his own labor. However, such a person, from the height of his stolen well-being, looks at the rest as if they are inferior.

It is foolish and ridiculous to divide people into those from the West and those from the East. In fact, people can be divided only into good and not so. On valuable and less valuable. That is, on those who think and act on the scale of human constructive values ​​and also live on, and on those who think and act differently, that is, destructively, parasitizing on others.

However, any destruction in the end will inevitably harm the one who relies on it. And this is how the way of thinking of the Western world, morally and morally destructive, begins to slowly turn into a real destruction, into a real disintegration of society, which has abandoned universal and spiritual constructive values.

Who fights with the sword, he will inevitably perish! And he will die in order to free the way for those who are more constructive in spiritual and axiological terms. Those who are better! Those who are spiritually more healthy! Who has higher values!

The current decay of the Western world, which was preceded by an internal, moral, value, and spiritual decay, cannot really be prevented by either the army of mercenaries or the special forces.

Therefore, the powerful empire of the West, standing on the clay feet of unconstructive values, slowly but surely collapses and frees up the place of the previously oppressed Slavs, who are carriers of much healthier and more constructive values ​​in terms of genuine humanity.

However, instead of understanding the true causes of the current situation and reorienting for the best, the West is becoming increasingly aggressive and repressive. The adopted model of behavior is not so easy to change. As the saying goes, a horse that is about to expire will desperately kick. And this agonizing horse still wants to drag the world into a new big war with Russia.

Slavs, let's give at least tacit resistance to the brazen West, who, despite our protests, continues to feed us with low-quality products. Products that are packaged equally, however, are diametrically different in quality in the West and in the East.

Let's remember about pride and we will not buy them! Better we will buy our own goods! After all, who is not able to appreciate their own, significantly higher quality products, he really deserves to be fed garbage.

Turning on the TV or opening a newspaper, let us realize that they are the tools of Western propaganda, because they have Western owners. Let's finally stop believing what we are told! Let us stop bowing down to the uniqueness of the West, under whose protection we supposedly must remain forever, because we can never be independent!

A thousand times repeated propaganda lies about our inferiority for many of our brothers became true! This truth is being imposed on us, so that it never occurred to anyone to rebel and free themselves from obedience to the West. That is why the Slavs specifically quarrel. That is why they turn against Russia.

Let's finally realize all these lies, brothers, and come to our senses!