USA vs Russia and the world

August 7 2017
112
During the discussion of the scandalous law of the US Congress on new sanctions against Russia along with Iran and the DPRK, and indirectly against Europe and the entire uncontrolled world, our Americanists, Vladimir Vasilyev and others, said a very important thing: President Obama. 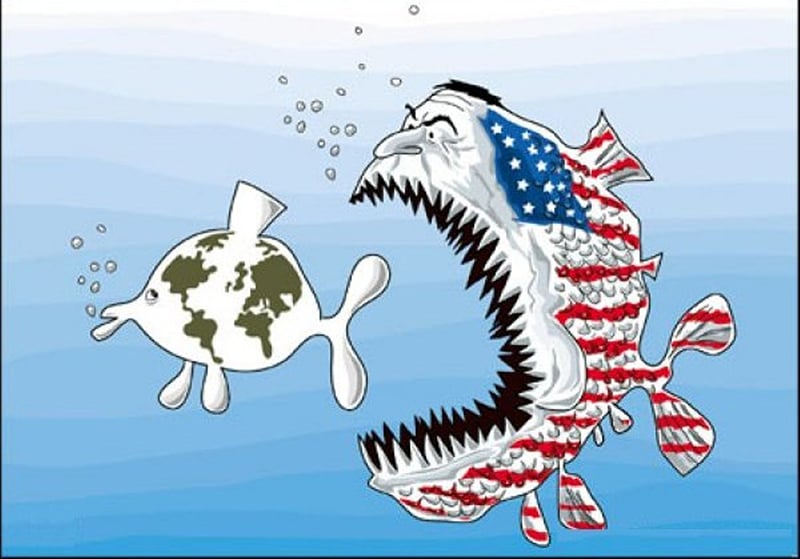 In this case, the notorious "interference of Russian hackers" in the American elections is the operation of the US special services, a new "test tube" of former Secretary of State Colin Powell. After all, the test tube with the "Russian hackers" was the main reason for the adoption by Congress of the law on countering Russia. Therefore, we see such a consensus of the American special services: they are all confident in the “Russian trace”, although there is no evidence. This is a political order of the “collective McCain”, so there is no evidence, and false “evidence” cannot be presented - they will be exposed.

President-elect Donald Trump as the person involved in the events knows that “the intervention of Russian hackers” is a deliberate lie, also directed against him, but it is so strongly repeated by Congress and the media that he can only express his personal point of view: I do not believe in “ Russian hackers "...

If Vasiliev’s information is correct, then Trump’s unexpected victory in the presidential election, with a message to improve relations with Russia, made it difficult for Congress to adopt a law against Russia, and Trump’s persecution was sanctioned in the media: they made him “Agent Putin” and of the law.

After the forced signing by Trump of the congress law on “opponents of America”, it turns out that his presidency is the result of Russia's interference in the elections, so the threat of impeachment persists, but Trump received a breathing space, which he may be able to somehow take advantage of.

In general, we had the illusion that Trump, becoming president, will receive at his disposal the executive authorities and special services, and will strengthen his power. We did not understand the depths of the depths of American democracy: everything happened exactly the opposite. It was the special services that took up Trump, and continue to strangle him after the noose. So far, without impeachment and attempted murder, but everything can be, if he kisses.

The secret of American democracy seems to be in the absolute power of the special services: they throw a noose around their necks to any president, or shoot both John Kennedy and his brothers, and blame it on the lone killers, Russia and the imperfection of democracy. Recall that the assassinations of President Kennedy and his brothers are still drowning in a flood of lies. Even then, the security services were untouchable, and resolved presidential issues ...

Somewhere at the turn of the century, a bipartisan neocon group came to power in the United States, opposing traditional Republicans and Democrats, supposedly united around the values ​​of "perfect democracy" and the permanent world revolution in Leon Trotsky. Under the cover of this fiction, in the United States, in fact, established a one-party political system, covered by the traditional two-party decor. The support of the US special services has become its support, or maybe parents, now this is no longer the point. Therefore, the "Republicans" and "Democrats" in the US today are indistinguishable, and oppose the Republican-traditionalist President Trump.

History President Trump says that it is the special services that operate the United States, or the neocon elite grouping by the special services, they are at the core of a “deep state” or “deep democracy”: they put and remove presidents and other undesirable witnesses.

Nearly a dozen corpses of journalists, and even FBI agents, around Hillary Clinton - this is their business, because Clinton is their political protege, and they protect her with all her corruption. Trump was publicly threatened with murder in the media, but that would have been too easy, he would have received posthumously Kennedy laurels, and the ears of the special services would have been too obvious. Trump is cleaned with the help of Congress. We talked with every congressman about “Russia's interference”. Who talked? Intelligence agencies reported on the "Russian trace". Here they are, intimidated, and vote unanimously against Trump.

The then CIA director John Brennan, and then the ceremonial master vice president Joseph Biden, were the first to go to the Ukrainian colony joined by the coup d'etat to the American "world order". Apparently, Brennan and ordered Turchinov suppress weapons peaceful protests in the South-East of Ukraine: after his visit Turchinov was declared the ATO in the Donbas.

Trump did not immediately realize the depths of the "American democracy", and submitted to its pressure when he signed the law of Congress, including against himself. This law is also directed against Russia, Europe, and the whole world. Trump is not against the US economic expansion in the world, moreover, he himself professes the idea of ​​"divide the world and rule", the US energy dominance, which are laid down in the law on the opponents of America.

However, Trump is at odds with the neocon plotters in values: he is not thrilled by the spread of gay democracy in America itself, so for the neocons he is a homophobe, sexist and obscurantist. Strategically, Trump expresses the undesirability of a rapprochement between Russia and China for the United States, and is skeptical about the idea of ​​the world “democratic revolution” of the neocons.

These positions in the USA are shared by many influential military and political figures, for example, Henry Kissinger, Zbigniew Brzezinski wrote about this before his death; they consider it necessary to cooperate in the US-Russia-China triangle. It is here that Trump can find his counterplay, he sees it and, simultaneously with the signing of the law “On the Opponents of America”, blamed the dangerous deterioration of relations with Russia, and the rapprochement of Russia with China, at Congress.

The BBC recently published an article: “In the USA, there is chaos, almost a revolution, in the center of which is Trump.” Our Americanist Vladimir Vasiliev confirms this: "There is confusion in Washington, temporary workers have come." Therefore, by and large, still Trumpnash, because he is an American patriot, paradoxically ...