August 11 2017
88
The message that Russian athletes in Budapest were forced to take off their T-shirts with Soviet symbols seems at the same time completely normal and absolutely outrageous. How can Russia fight the demonization of our past? After all, the problem is not at all in communist symbols, but in relation to Russia as such. 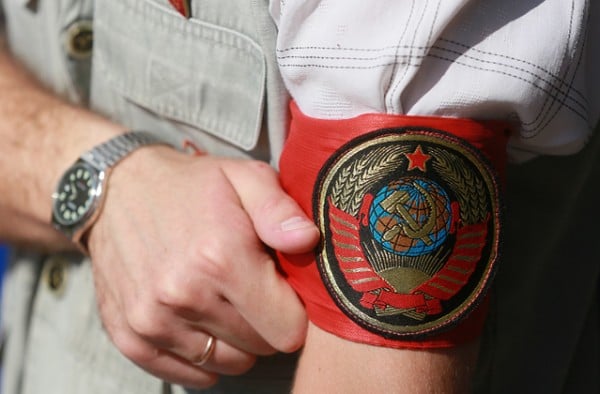 At the World Championships in water sports held in Budapest, a small "incident" occurred. Representatives of the coaching staff of the Russian water polo team were forced to take off their T-shirts with red five-pointed stars and the words “USSR”.

As one of the Russians said, at the entrance to the stadium, the police politely asked to remove T-shirts with the symbols of the USSR, explaining that they would not be allowed into the stadium in this form, and in the future they could be arrested and expelled from the country. The policemen apologized and explained their actions by the fact that Soviet symbols in the country were equated with fascist and prohibited by law, RIA "News».

Formally, there is nothing surprising in this message - the police only fulfilled the law adopted in Hungary as early as 1993 and prohibiting totalitarian symbols, which in Hungary include communist and Nazi symbols. Hungary is one of the seven European countries in which Soviet symbols are prohibited in one form or another - besides it there are three Baltic countries, Georgia, Ukraine and Poland. In principle, it would even be possible to reproach our athletes with provocations. Like, why are you wearing shirts with symbols forbidden in this country? Did not know? We had better prepare for the trip ...

But this, of course, is ridiculous. They do not come to another monastery with their charter, but here is another case. The USSR is not just an abbreviation, it is the former name of our state, the star with the hammer and sickle is our former state symbols. Respect for your stories - normal feature of any nation. And if the citizens of Russia are denied the right to demonstrate the symbols of their state, even if they were formerly, somewhere abroad, they are directly told to them - we do not respect, we despise your past. Well, even then Russia and its citizens have the right to relate accordingly to those who declare such to them.

Why do the Hungarians dislike us - and really dislike us?

Allegedly for the suppression of the “1956 uprising of the year” - when the Soviet army really crushed a rebellion against local communist government with military force. But then civil war broke out in Hungary. And it is not surprising that the USSR, in the military-political bloc with which Hungary was part, supported the Communists, who were tried to be removed from power by force. Fights between Hungarians and Russians on the streets of Budapest? Well, for 11 years before that, Hungary was an ally of Germany in the war with Russia, and its army fought on our territory - we still do not reproach the Hungarians at every opportunity.

Two nations can have normal relations, and the two countries have a lot in common. And the last years, when Hungary courageously defended its national identity and sovereignty under pressure from the European Union, including protecting its right to good relations with Moscow. So there is no Russophobia among the Hungarians. And what is there? There is a policy of equalizing communism and nazism, equalizing the USSR and fascist Germany, equalizing a red star and a swastika.

The fact that neither communism nor the USSR is internationally condemned and not placed on par with Nazism is not a decree for Eastern Europeans. They refer to their own bitter personal experience, the Hungarians to the 1956 year and the fact that communism was imposed on them from the outside. Although, to put it mildly, this is an exaggeration - even in 1919, the Hungarian communists took power in the country, but then they were defeated, and some of them moved to the USSR. There is nothing surprising in the fact that in 1945, when the Soviet army took Budapest, they returned and came to power: yes, with the help of Moscow, but also having support among their people.

One can blame the then Hungarian leadership for betraying national interests, for internationalism and cosmopolitanism, for humiliating the Hungarian national consciousness (and this was), but this is part of the Hungarian history, it was done by Hungarian citizens, not by Soviet advisers. Well, we have also banned our communist symbolism, the Hungarians will object to us.

In 1993, Hungary was one of the first to adopt a law banning totalitarian symbols - before it, in 1991, only Latvia managed to do this, in which, however, it was not so universal. The example of Hungary in Eastern Europe was followed only by Poland. And in the post-Soviet space, the second wave went only 10 years ago: Estonia - in 2007, Lithuania - in 2008, Georgia - in 2011, Moldova - in 2012. In Chisinau, however, a year later, the law was declared unconstitutional and was repealed - and in the same year 2013, the Hungarian law was declared inconsistent with the constitution. It was suspended - but it was resumed a couple of months later, with clarifications. So, the penalty is applied to those who use the "symbols of totalitarianism" to violate civil peace or demonstrate them in public, in mass meetings.

Well, the last country where such a law was passed was in Ukraine in 2015. The purpose of the ban on the symbolism of the "criminal communist regime" is understandable - to drive people into the head about the nonsense that Ukraine was occupied by the Soviet, that is, Russian power. Anti-communism here is needed only to cover Russophobia - as, indeed, in most other cases, the application of such legislation.

What to do with this Russia? The Budapest incident, of course, fades against the background of the recent Polish law on the demolition of monuments of the communist era, which also includes part of the monuments to Soviet soldiers, or the fight against Soviet symbols in Ukraine. But the difference between motives and domestic political goals (for the Hungarian authorities, Russophobia is not at all relevant) does not negate the fact that all this is a challenge for our country.

We understand that today they prohibit the red star, and then declare a two-headed eagle with crowns, a scepter and a power to be a totalitarian. Say, he is in our association with the damned imperialistic past, at times, when Russia enslaved and oppressed us. By the way, the fact that the double-headed eagle is not yet banned in some neighboring “anti-totalitarian” states is explained very simply by the fact that it again became the emblem of Russia. And so would not have regretted it. It is strange that even on t-shirts with Putin they are not trying to recoup - but still ahead.

We should not make excuses for our Soviet past to our neighbors - there were many things in our relations both during and before the Soviet period, in which we can blame them, and they - us. An attempt to make communism a purely Russian phenomenon, to declare Russia its exporter, and then equate it to Nazism is in fact Russophobic. That is unfair in relation not only to the communist ideology, but also to our country. And if in Poland or Hungary, Latvia or Georgia they think that the USSR is forever in the past, then they are deeply mistaken. He stayed in us - not specifically living people, but in the Russian civilization, in the modern Russian people.

Of course, every sovereign state has the right to prohibit the red star and the red flag. But only then let there not be surprised that the Russians (and regardless of their political views) will perceive it as disrespect for their state. With all the ensuing consequences.