August 4 2017
22
In Western information sources, the topic of how Western companies bypass or try to circumvent the anti-Russian sanctions pushed by the United States of America is gaining momentum in popularity. As you know, our hotly adored partners brought sanctions against Russia to an extreme degree of absurdity, thus trying to provoke popular ferments, and with the indispensable desire of the people to meet the American liberators with bread and salt. But here's the ill luck: the people with bread and salt are not in a hurry to the American embassy, ​​they do not fall to their knees before the photograph of the interiors of the Oval Office. Not only that, and many Western companies have decided that Uncle Sam is, of course, big and formidable, but it is not always necessary to look into his mouth. When Uncle Sam turns around or goes to the wind, the creative vein of representatives of business structures quickly finds himself, in fact demonstrating that any sanctions in the modern world can be circumvented, overlooked, jumped over, kicked off, etc. etc. Even if these sanctions are imposed by the most exceptional of the exceptional powers of the universe.


More than others are killed about this Reuters, who can not move away from the Siemens turbines supplied through subsidiaries in the Crimea (although there still need to be proved). Can not move, but here again like snow on the head. Uncle Sam decided to cheat not only the Germans, but now, as it turns out, also the Norwegians. Everyone wants to eat, and Washington is trying more and more to cut the rations for its "partners." So go on tricks.

The aforementioned Reuters published another “exposing article” the other day, in which it is told about how the Norwegian companies are trying to inflate the Big American brother. The article is more like a sort of Western version of the slander, but attention deserves not so much the material itself, but the fact that more and more of its foreign partners are sending the American “uncle”. While sending a whisper, while the final address of the "journey" even in a whisper well traced.

So, about the “revealingly” Reuter elegantly disgraceful Norwegian scheme. As is known, the so-called slate industry came under US sanctions. In simple terms, the United States effectively banned those who supported the sanctions from entering into trade and technological relations with the Russian Federation where it relates to the production of shale hydrocarbons. So they wrote "shale hydrocarbons." Instead of making Norwegians a finger, realizing that profits flow from hands in an unknown direction, they decided to make a knight's move and simply replace one word in contracts with Russian companies.

The Norwegian Statoil changed the word “shale” to “limy”, and it went ... At the same time, Statoil’s managers didn’t conceal the fact that the US sanctions policy got them out. They say: your sanctions apply to shale “reservoirs”, and we, along with Rosneft, do not touch shale at all, but we drill deeper at the level of lime deposits. You will impose sanctions on the lime layers, “find” other layers that are not subject to prohibitive measures. 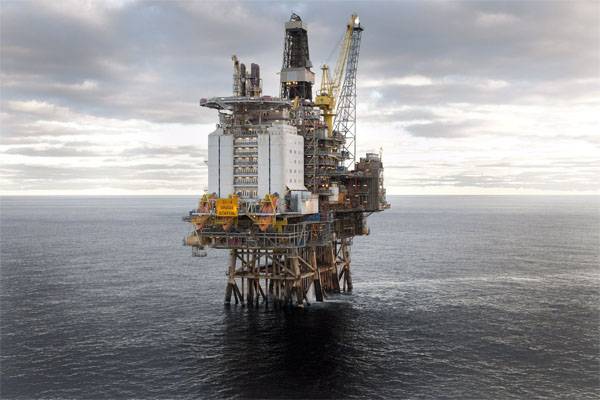 One can imagine how much poison was poured from the organisms of those who, in the US Congress, chewed bubblegum day and night with the aim of giving birth to sanctions that would really ruin the Russian economy, and even make European partners dance under the American pipe.

Poison poured out even more when Reuters published the continuation of his saga about 400 and one relatively honest way of circumventing overseas sanctions measures. The material stated that they decided to take advantage of the Norwegian experience (oh, horror!) And the closest allies of the States are true shavers. Thus, the British company BP is also ready to move away from the use of the word “shale” in the contract, automatically releasing itself from the sanction chains. Moreover, a large British company came out with such an initiative on the government of the United Kingdom. And the government, if somewhere the shadow of an American stick with nails does not flash, there is no reason to refuse BP. After all, nobody really imposed sanctions on “lime tanks”, and even if sanctions are imposed, it is only after the fact that it opens work with Rosneft for the British on “lime” layers. And since we are talking about billions in profits, then the American-British "alliance" is testing itself.

Against this background, the sanctions Gazprom once again gained access to the OPAL gas pipeline a thousand times. It is the largest gas artery in Germany, which supplies gas from the Nord Stream gas pipeline systems to continental Europe. For some time now, OPAL has been virtually silent as access to it has been blocked for Gazprom. And so, on the eve, it turned out that the Russian gas giant again has 40% share of the total gas pipeline capacity. Gas transit through Ukraine was cut off immediately. And then some people in the West remembered that the Opala compressor station in Brandenburg was built by Siemens. Well, what are you going to do ... again Siemens imposed something on the sanctions? ..

And if we take into account that OPAL has a continuation in the form of the Czech gas pipeline Gazel, which goes to Slovakia, we can assume that soon the reverse of the Slovak gas will become somewhat more expensive for Ukraine ...

Now, in the West, they are wondering who exactly opened access to Opal to Gazprom, in effect spitting on the so-called third energy package. However, whoever turned out to be this mysterious discoverer of Opal for Gazprom, the European Commission, in fact, has no reason to complain. The fact is that the Russian gas giant received its share at a public auction. Nobody has simply pulled this auction ... Except for Gazprom ... Everything is economically clean - the third energy package remained not violated ... That is, the sanctions again remained somewhere along the port side.

It remains to wait for new publications about how partners Uncle Sam, demonstrating that the sanctions games they began to bother, will generate new ways to honestly fiddle restrictions in economic contacts with Russia.