Department of State: Washington will continue to attempt to normalize relations with Moscow

August 2 2017
30
The administration of the United States maintains the mood to normalize relations with Russia, despite the decisions of Congress, reports TASS Statement by Secretary Rex Tillerson. 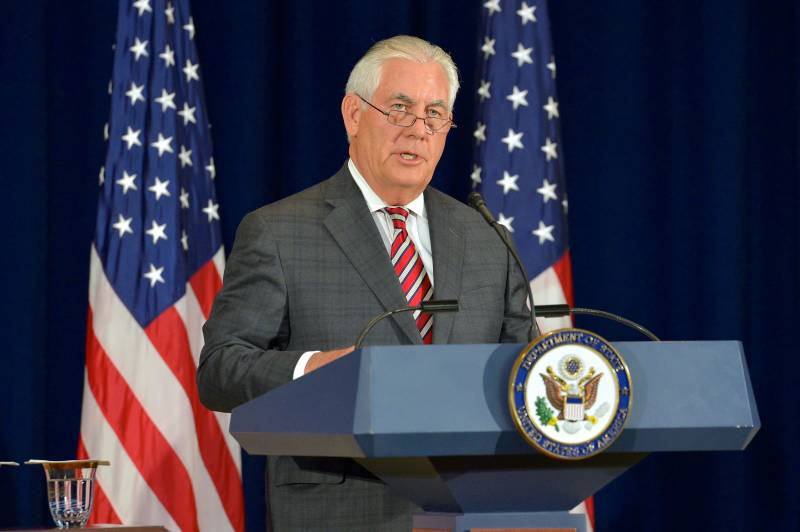 Tillerson confirmed that the President of the United States "without enthusiasm" reacted to the decision of Congress to toughen sanctions against the Russian Federation.

Neither the president nor I are happy about the actions of the Congress aimed at the elaboration of these sanctions. We made it clear that, in our opinion, these actions do not contribute to the (success) of our efforts (aimed at normalizing Russian-American relations). But this is the decision that they (the congressmen) worked out, and they made it by an overwhelming majority (of votes). The president accepts this, and all the signs indicate that he will sign this bill,
said the state secretary.

And then we will simply work with him (the document). (However) we cannot allow him to lead us astray from attempts to restore relations (with Moscow),
He stressed.

Tillerson has habitually linked the prospects for easing sanctions and lifting them to the implementation of the Minsk agreements.

In Ukraine, we were extremely consistent in our signals from Russia. The Minsk agreements must be implemented, otherwise nothing can be done in relation to the situation with sanctions,
he said.

In the very first conversations with the Russians right after we came to power, we made it clear to them that we want to work with them, but they themselves will have to take certain steps to remove some of the current concern,
added on.

In his opinion, at present, Russian-American relations are under threat of degradation:

As I pointed out during my first visit to Moscow and at meetings with President Putin in the Kremlin, as well as upon their completion, relations are at a historically low point after the end of the Cold War, and they may deteriorate. And it seems to me that the question of the events of the last week is whether they are deteriorating or we can maintain some level of stability in these relations and continue to find (...) mutual interests and ways of settling our differences so that they do not turn into open conflict.

At the same time, he noted that “one area of ​​common interest is terrorism”.

We chose a theater in Syria, (...) to test our ability to work together. We share the view that ISIS (IG, a group is prohibited in the Russian Federation) is a threat to our countries. And we are committed to defeating ISIL and other terrorist organizations,
declared state secretary.

According to him, he expects to discuss further possible steps in Russian-American relations at a new personal meeting with Lavrov in the capital of the Philippines next weekend:

I will meet face to face with Foreign Minister Lavrov this weekend on the margins of meetings in Manila (through ASEAN and the East Asian Summit).

Tillerson recalled that he and his Russian counterpart had already talked on the phone in the last few days after Moscow had ordered Washington to reduce the scale of the American diplomatic presence in the Russian Federation:

I would say that our conversations after these actions were professional, there was no aggressiveness. It seems to me that Foreign Minister Lavrov and I understand our roles, we understand our responsibility. I believe that he is as much as I, committed to trying to find ways to return these relations (to normal), to make (Moscow and Washington) closer to each other.

He acknowledged that the decision to reduce the diplomatic mission in Russia will inevitably affect the work of the State Department.