Singer of the sea and Russian glory. To the 200 anniversary of Ivan Konstantinovich Aivazovsky 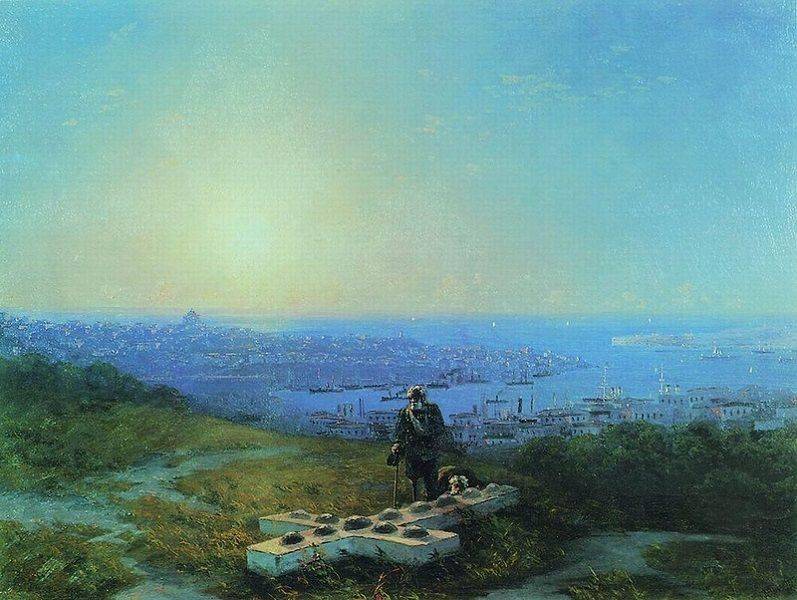 200 years ago, 17 (29) July, the great artist Ivan Konstantinovich Aivazovsky was born. As is the case with all outstanding artists, his work (and this is about 6 thousands of paintings) reflects a variety of topics. But, above all, Aivazovsky is known as a singer of the sea. As a marine painter, and also - a battleista.

The sea is not only landscapes of incredible beauty, pleasing to the eye of anyone who looks into the endless attracting distance. This is also one of the most important sources of military glory of Russia, the arena of numerous battles and great victories of the Russian fleet.

On the canvases of Ivan Konstantinovich - the sea in all its manifestations: either calm, terrible, stormy; that day, the mysterious night; now peaceful, then in flames of a fierce battle ... Armenian by origin, Aivazovsky, became an artist of world importance, who glorified not only the beauty of the Russian shores, but also the valor of the Russian people; capturing heroic pages stories Russia.

The future painter was born in Feodosia, in the family of the Armenian merchant Gevork (Konstantin) Ayvazian, who wrote his surname in the Polish manner: Gayvazovsky. At birth, the boy received the name of Hovhannes (however, he became known to the whole world under the Russian name: Ivan Konstantinovich Aivazovsky: the artist considered himself inextricably linked precisely with Russian culture).

Talent Aivazovsky began to manifest itself from an early age. The boy was greatly impressed by the uprising of the people of Greece (1821-1829): the image of this uprising caught Hovhannes’s eyes, and he not only carefully examined them, but also redrawn them. In addition, he was fond of playing the violin.

I must say that Father Hovhannes (Ivan), despite the fact that he was a merchant, was not a rich man. After the epidemic of plague 1812, he went bankrupt, and the family experienced great financial difficulties. The talented boy often lacked even paper, and then he drew coal on the walls of houses. Once such a picture of his saw Feodosia mayor Alexander Kaznacheev. This man played an important role in the fate of Aivazovsky: thanks to him, the young artist had the opportunity to learn. In particular, the architect Jacob Koch, who helped Ivan in every way, gave him paint and paper. When Kaznacheyev was appointed governor of Tavria and transferred to Simferopol, he took the young man with him and helped him enter the Simferopol gymnasium.

In August 1833, Aivazovsky arrived in St. Petersburg, where he entered the Imperial Academy of Arts (thanks to the same Kaznacheev, he was credited to the public account). He studied first with landscape painter Maxim Vorobiev. After the first success of the young painter, he took the disciples of the French marine painter Philip Tanner. Unfortunately, Tanner was not the most decent teacher: he wanted to use Ivan only as his assistant and forbade him to work independently. Despite this ban, Aivazovsky ventured to present five of his works at the exhibition of the Academy of Arts in 1836. Tanner, who envied the pupil, did not find anything better than to complain to the Tsar, Nicholas I. He ordered to remove the paintings of Aivazovsky from the exhibition. The artist fell into disgrace. However, many influential people stood up for him, including the fabulist poet Ivan Krylov.

Thanks to the intercession, the artist was able to continue his education. Six months after the unpleasant history, he was assigned to the class of battle-painting, where he studied with Alexander Zauerveyd. When the young man had to study for two years, he was sent to this time to his homeland - to the Crimea - to improve his skills.

Aivazovsky painted not only landscapes. He had the opportunity to personally attend military operations in the valley of the river Shah. There he was inspired by the painting “The Landing of the Detachment in the Subashi Valley”, which Nicholas I personally bought. After that, the emperor wanted Ivan Konstantinovich to sing the feats of the Russian fleet, and patronize him. In the 1839 year, returning to the capital, Aivazovsky received not only a certificate, but also a personal nobility. Then numerous trips abroad began: to Italy, Switzerland, France, Holland, England, Spain, Portugal ... Wherever he went, his works were highly valued everywhere and were marked by awards.

In 1844, returning to Russia, 27-year-old Aivazovsky became the painter of the Main Naval Staff. In 1845, he decided to settle in his native Theodosia, having built a house on the embankment of this city. Now it houses the main museum of the artist - the famous art gallery, which is mainly famous for this city.

In 1846, the painter went on an expedition led by F. Litke to the shores of Asia Minor. He was impressed with Constantinople and dedicated several canvases to this city.

When the Crimean War began, Aivazovsky went into the thick of things - to besieged Sevastopol. There he organized exhibitions of his works, trying to maintain the morale of the defenders. Subsequently, the defense of this heroic city will be the plot of his paintings. The artist refused to leave Sevastopol, despite the fact that it was becoming more and more dangerous there. He believed that, as a painter of the Main Naval Staff, should be exactly where the fateful battle is fought. Admiral Kornilov, who wanted to save a talented person’s life, even had to issue a special order for Aivazovsky to leave. As a result, he went to Kharkov, where his spouse and daughters were at that moment. On the way, he learned the tragic news of the death of Kornilov.

“Navarinsky fight”, “Chesmensky fight”, “Sinopsky fight” (on this subject there are two pictures with Aivazovsky - day and night), “Brig“ Mercury ”after the victory over two Turkish ships”, “Vyborg sea battle”, “Ship” Empress Maria "during a storm", "The Siege of Sevastopol", "The Capture of Sevastopol", "Malakhov Kurgan" ... You can write a separate article about each of these canvases. And it’s better to just admire how masterfully the artist depicts not only the greatness of the sea, not only the power and beauty of the ships, but also the heroism of the Russian people fighting the elements and the enemies.

For his native Theodosia, Aivazovsky did a lot - he opened an art school there, took care of the construction of a concert hall, a library, and led archaeological excavations. Later, due to the fact that Theodosians experienced difficulties with water - the artist-philanthropist with his own money built a fountain with drinking water in the city. He also contributed to the construction of the railway Theodosius - Dzhankoy, as well as buildings for the museum of antiquities on Mount Mithridates (unfortunately, during the Great Patriotic War, the Nazis destroyed the museum).

Aivazovsky died on the 83 year of life, in the spring of 1900 of the year, until the last time he was working on the picture “Ship Blast”. So, unfinished, it is located in the Feodosia gallery ...

Unfortunately, the 200 anniversary of the birth of Aivazovsky was not without political speculation. The notorious non-president of Ukraine, Petro Poroshenko, declared that the great marine marine painter and battle-painter was ... a Ukrainian artist. I tried to privatize a great name and use it for my own political purposes. However, nothing will come of this "grabbing". Aivazovsky is a global value, but most of all it is connected with Russia. He was glorified by the Russian fleet, who all there poroshenki and others like them tried to drive out of Sevastopol (somehow, those who accuse Russia of “annexing the Crimea” are silent about this).

How correctly responded to the trick Poroshenko senator Alexei Pushkov, "The only canvas Aivazovsky, which is related to Poroshenko and his legacy, is the "Ninth Wave". And he is already approaching».

And about what country Aivazovsky felt like a patriot, best said he himself: "Every victory of our troops on land or at sea makes me glad as Russian in the soul and gives a thought as an artist to depict it on the canvas "