Rosguard. Some thoughts after reading a good reportage

July 31 2017
137
I am often amazed by the reaction of a part of our readers to any events that mention our special services. When something out of the ordinary happens, we shout about the flaw in these special services. But when it comes to those activities that are designed to improve their work, we unanimously begin to talk about the desire of the leadership to step up the fight with us, about the senseless waste of money, about the elderly and orphans, about bad roads, about villages without gas and other problems. The object of the last surge of emotions of this type was the Rosguard. 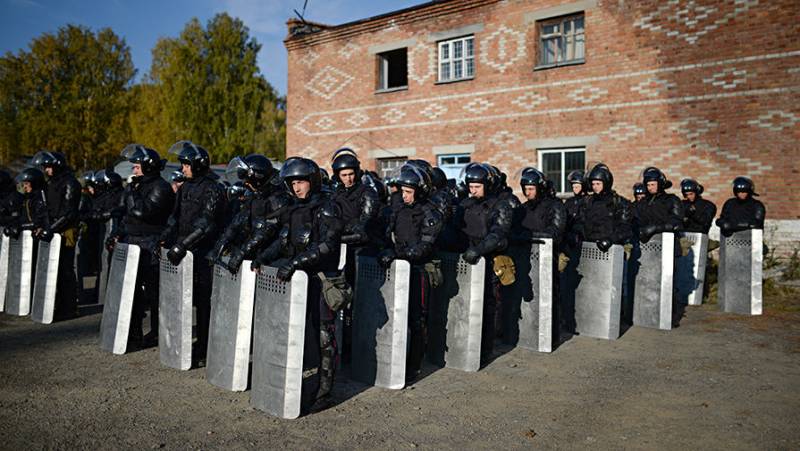 Last week, Lenta.ru published a very informative article on aviation Rosguards, accompanying her with a video report (https://lenta.ru/articles/2017/07/26/aviaguard/). The article is really good. It was this circumstance that became the stumbling block for some of our "fighters for the Motherland" from various "radical outskirts" of the political spectrum. There are many reprints on the Internet, not only in the media, but also in blogs. And, accordingly, a lot of opinions ...

Rosgvardia exists in the Russian Federation for just over a year. Let me remind you that this special service was created on April 5 of the year 2016 on the basis of the Russian Interior Ministry troops. Just over a year, but show me a man who wouldn't know about her. Show me a man who would not have at least some opinion about the Rosguards. Positive, negative, neutral. The only thing I encountered during the preparation of this material is that ... people really do not know the official name of the special service.

Rosgvardiya, and everything. Our fault. More precisely, the media. Yes, and the Rosguards. Therefore, I correct this mistake. The full name of the young secret service is the Federal Service of the National Guard of the Russian Federation.

But the results of work over the past year, many people know! Paradox? Not. Just the results of the work of the Rosguards concern many of us personally. Or through people close to us, through friends and acquaintances. Let me remind you, according to official data, for the 2016 year, the fighters of the Rosguard destroyed 125 militants and eliminated more than 300 camps, caches and shelters. At the same time, according to the data with reference to the temporary information center of the Rosguards, over the past year, SOBR officers conducted about 9 thousands of special operations. In their course 19 hostages were released, more than 7 thousands of violators were detained. Among the detainees - 332 armed, 281 - were wanted. In addition, about 1000 firearms were seized. weaponsOver 61 thousands of ammunition.

The article indicates the presence in the units of the Russian Guard under a fairly respectable aircraft fleet. But most importantly, about the planned procurement of additional aircraft. Why extra? After all, today in the Rosguards 60 various aviation units. From individual troops to the air regiments. And the fleet includes many types of aircraft. Only aircraft 9 types. But there are still helicopters, drones ...

Theoretically, the question is correct. But only theoretically. And practically? Maybe you should look at the map of the Russian Federation? View with a scale bar. From Anadyr to Makhachkala. From Petropavlovsk-on-Kamchatka to Kaliningrad. Our country is huge. And the transfer of units and parts is quite a difficult task. But if for military units there exists (in peacetime) at least some temporary reserve, then for the units of the Rosguards there is no such reserve. Terrorists after the execution of the attack go. And they disappear quickly. This is the problem.

I will now express a rather controversial thought. For some readers. However, like any citizen of the Russian Federation, I have the right to my own judgments and estimates. I believe that the Russian Guard is an anti-terrorist army. Similar to tank and other armies, air defense and missile defense armies. Today, the military component of the Russian Guard is 8 divisions, 21 brigades and 69 regiments. Everything is very different in composition: from the protection of important state facilities to the operational purpose, including artillery, engineer-engineer, training and other units. And she performs today, including combat missions. Participates in hostilities.

And the enemy of the guards is not easy. This is not just a gang with small arms. These are detachments with rather serious weapons. Mobile, having their base. Able to resist lightly armed soldiers. And the locations of such gangs are not simple. Mountains, forests, remote villages and villages. On the "cheers" take them will not work. The lives of trained fighters are, sorry for some cynicism, expensive. Both in moral, and in state, and in material sense.

It is not a secret for anyone that today, no matter how much we resist, there are quite a lot of “problem” foreigners on our territory, as well as Russian citizens. Including having combat experience of participation in terrorist organizations in other countries. It is no secret that such people are well aware of their fate in case of capture. It is no secret that they usually resist to the last.

Some will now say about the civilian population that may suffer from such attacks. Yes maybe. Moreover, even now it is suffering. Just because terrorists often use civilians as hostages. And at home, especially in mountainous areas, they often build very soundly, like mini-fortresses. However, the same helicopter can conduct aimed shooting. Specifically for the detected targets. And just "squeeze" the defenders at the time of the nomination of a detachment of guards. Or destroy the prepared line of defense.

For most, the Rosgvardia Aviation still remains the means of delivering fighters to the place of their next job. By the way, for those interested, in the above article there is not only a description, but also a video of such helicopter work. And this is probably correct. Again, because of the scale of our country. Indeed, other functions are included in the sphere of interests of this special service. The fight against terrorism is only a part, albeit the most visible. But there is also the protection of objects. There is a protection of public order. There is help in the aftermath of disasters of any nature.

In general, I understand perfectly well what caused the interest in this topic from the opposition and the radicals. They have already started the election race. Despite the fact that most people still do not think about the upcoming elections, the struggle for our minds is already underway. And in this fight all means are good. I am sure that there are already comments about Rosgvardiya as an understudy of the FSB (after all, it’s true, some of the functions of both special services are the same). I am sure that experts from the “liberal” camp are already writing about the “new NKVD”.

All this fuss is not particularly interesting for me. Just because the road spoon for dinner. And before the "dinner" still oh how far. Yes, and we are not the same romance, which were at the beginning of 90-x. The famous "vote with your heart" is no longer impressive. We understand that the brain is still in the head. But what Rosgvardia has done over the past year, and what has been done for the current one, is impressive.

Therefore, I have two questions. One on the subject of the article. Why is the realistically fighting structure not armed and equipped with equipment on demand? Everything you need to be given first. Not much needed. Need aviation? Get it. Even to the detriment of the army. Need armored cars? Get it. OPK today can increase production by a certain number of units. With increasing terrorism, which is increasing its military capabilities, more and more opportunities are needed for the forces opposing it.

The federal service of the troops of the National Guard of the Russian Federation must be fully developed and supported. As practice shows, international terrorism today is no longer particularly afraid of poorly armed police forces. Even participants in illegal rallies, meetings, marches are not particularly afraid of the guards and the police in the cordon. And why? I remember the old film "Born of the Revolution." There was an episode that provides an answer to this question. Remember how the new criminal investigation department in St. Petersburg defended the embassy? And the reaction of the attackers on the arrival of the sailors? Imagine that on the spot a policeman will be a pro with "square shoulders" and with the appropriate equipment. Will the boys from the "bulk" opposition go to these guys? I doubt it. And if behind the backs of the guards there will be other special means, like in Europe or the USA?

And the second question concerns specific fighters. However, I do not know exactly, maybe it has already been resolved. I think that readers who are associated with this structure will either correct or confirm. So, some units of guardsmen are involved in real combat operations. It means that they should have a preferential calculation of years of service and other benefits. Are they in the Rosguards? And we do not need to "make surprised faces." Fu, the author, spoke about the material. Yes, he did. Because it is important for a particular soldier and officer. This is important for their loved ones.

And further. In the order of the proposal for the Rosguards. I once became interested in the color of the berets at the Interior Ministry special forces. Many people remember the name of this color - krapovy. But for the first time this color appeared in the Russian Empire to distinguish the ranks of a separate inner guard corps in 1829 year! True, it was the edges, not berets. And the internal guard itself was created by the decrees of Alexander I in 1811. Many of the functions of the internal guard and the Rosguards are the same ... Why be shy about your stories?

Maybe it is worth considering the question of the Rosguards from this point of view? And consider the time of creation is not 5 April 2016, but still 1811? The question, of course, is not particularly relevant today. But in terms of the continuity of generations is important.

Honestly, when writing this article, in the course of working with documents, in conversations with people, much has become clear even for me. And the questions that have been raised here have largely arisen already in the course of thinking on this topic. Perhaps it should have happened. In general, the successes of the Rosguard, even with all the problems of formation and maintenance, are impressive. Well done guardsmen ...

Ctrl Enter
Noticed oshЫbku Highlight text and press. Ctrl + Enter
We are
Underwater, on the ground and in the air: what are the fighters of the RosguardsColor music for Rosguards
Military Reviewin Yandex News
Military Reviewin Google News
137 comments
Information
Dear reader, to leave comments on the publication, you must sign in.