Every year, the Army international games cause a growing interest in the country and abroad. We remember how it started. Three years have passed, and today thousands of servicemen from 3,5 states will demonstrate their professionalism over 28
- said the head of the Russian military department at the opening ceremony of the Games in the Patriot Park, reports RIA News.

He expressed satisfaction with the growing number of states hosting the Games on their territory. 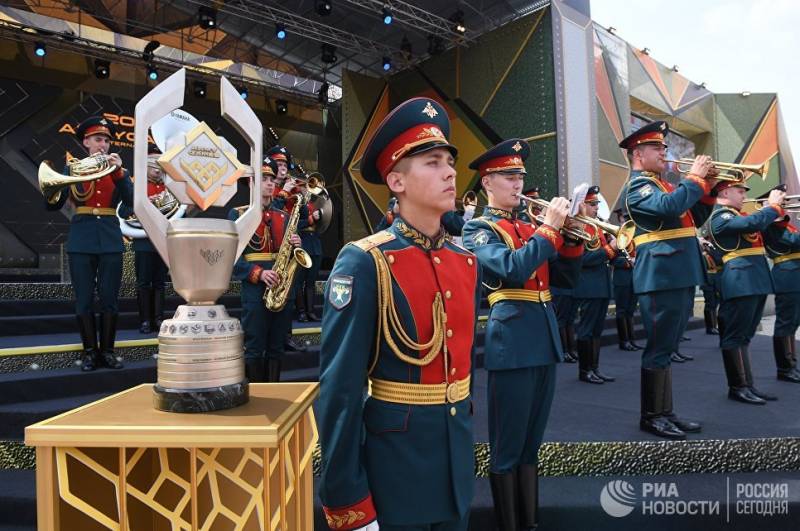 It is pleasant to note that the number of countries that are ready to take the baton of the Games on their territory is increasing. This time, in addition to Russia, they will be held in Azerbaijan, Belarus, Kazakhstan and China.
- he said.

Shoigu noted the expansion of the list of competitive disciplines. At the moment, participants will compete for medals in 28 contests.

The head of the Russian defense ministry expressed confidence that the participants in the Games would show sense of purpose, endurance, strength of mind and firmness of character and that they would withstand all the trials and achieve their goals.

Welcoming remarks to the guests and participants of the competition were addressed by Russian President Vladimir Putin, who, in his speech, expressed confidence that the Army International Games would strengthen the traditions of partnership and mutual assistance, and would promote the development of cooperation between military departments of different countries.

I am confident that the current Army International Games will help share experiences, compare the capabilities of various types of weapons and equipment, but most importantly, they will strengthen the traditions of partnership and mutual assistance, will promote the development of cooperation not only between military departments of different countries, but also our peoples
- says the greeting

According to Putin, the program and geography of the competition is expanding every year, the number of teams from different countries is increasing, demonstrating their military skills on land, at sea, in the air, showing the best qualities needed in military service: training and discipline, ability to act smoothly and clearly, as well as the ability to quickly make decisions, on which in a real combat situation depends not only the success of the operation, but also the lives of comrades.

The President of Russia wished all the participants good luck and new victories, and the audience - bright impressions.

Also, the President of the People’s Republic of China Xi Jinping and the President of Belarus Alexander Lukashenko addressed the participants and guests of the competition with a video message:

Army International Games (ARMI-2017) is one of the brightest brands of military cooperation and a unique platform for the exchange of experience between the military of different countries. This is the fourth Army International Games that have been held since 2014. During these years, the Games have become one of the brightest brands of military exchanges and cooperation in the region, serving as a unique platform for strengthening friendship and interaction between the armed forces of different countries.
- said Xi Jinping

Excellent combat readiness, training and equipment of the armed forces, mutual understanding and military brotherhood of allies and partners are the most reliable guarantee of the security of our countries
- stressed the President of Belarus

May the warriors of our armies continue to meet precisely at such competitions, and their geography expands to the maximum, involving new countries and continents. Such events serve the great goal of maintaining peace and security.
- added Lukashenko.

ARMI-2017 will be held from 29 July to 12 in August simultaneously in five countries: Russia, Azerbaijan, Belarus, Kazakhstan and China at the 21 test site.