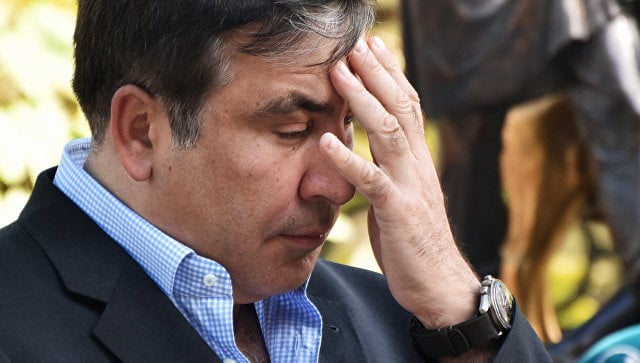 
A party of three Maidans, a lover of ties and the author of a profound utterance: “Be-be-be, no one has ever spoken to me yet,” met Mikhail Saakashvili. Now they talked differently. 26 July, another famous maydanschik - Petro Poroshenko - deprived of the former "friend" of Ukrainian citizenship. Thus, Mishiko actually became a bomjar. "I am a man without a country“,” Said the devil himself.

The formal reason for the deprivation of Saakashvili’s Ukrainian citizenship is that when he applied for this citizenship in 2015, he wrote false information about himself. Namely, he kept silent about the fact that in his homeland criminal prosecution is being conducted against him.

One might think that at the time when the citizenship of this person was granted, the attitude of the Georgian law enforcement agencies towards Saakashvili was a secret behind seven locks. Nothing like this! Ukrainian media trumpeted about it for a long time. Official Tbilisi demanded the extradition of Mishiko, which is why there was even “ice” in relations between Georgia and Ukraine.

Now, suddenly, the "open secret" has been revealed. The famous tie taster, who abdicated Georgian citizenship, lost the acquired citizenship of Ukraine. Now he has to sit in a proven place - in the USA. In the very place where he received his salary when he was in office as the President of Georgia.

Well, how can you do without the next poskakushek? That's frantic Michael, going into exile, called on his supporters to take to the streets and promised Petro Poroshenko a new Maidan. Mini-maydanchik, in fact, took place on July 27 in Kiev. First, the protesters gathered on the spotted ground - Maidan Nezalezhnosti, threatening to “drown him in a gold toilet” by Pyotr Alekseevich. Then the crowd moved onto Bankovaya Street, towards the Poroshenko administration, but the police blocked the way. There was a clash: the protesters were angry at the statement of law enforcement that a repair was under way at Bankova, although there was no repair.

Well, the lies of those who did not allow supporters of stateless persons to be completely worth the lies of Saakashvili himself, who kept silent about the claims made to him by the Georgian authorities. But this is just a minor lie. The political technologies themselves are based on a much bigger lie, with the help of which Mishiko came to power in Georgia, and then the Ukrainian Maidans were organized ...

Nadya Savchenko herself stood up for the disgraced "politbomzh". This is not surprising - both characters are each other worthy. According to her, this decision Poroshenko "will have serious international consequences, because with external aggression the deterioration of relations with the free world will cost Ukraine and Ukrainians a lot". However, the "free world" (in the face of the United States) is still silent in response to the "violation of human rights." The State Department does not comment. I can’t hear the cries about the “Poroshenko’s dictatorship” in connection with the “persecution of a famous fighter for democracy”.

Yes, and the "fighter" is accused in Georgia of absolutely not "democratic" things: persecution of political opponents, crackdown on opposition demonstrations (not to mention corruption). Usually such accusations lead to the fact that the politician falls into international disgrace, but not always. Often it continues to be used when it is profitable (for example, if you need to strengthen the anti-Russian camp). When it begins to interfere - throw out, like a used rubber product.

Apparently, the loud trip of Petro Poroshenko to Georgia, his demarche on the border with South Ossetia, the “sincere” conversation with the current Georgian President Georgi Margvelashvili - all this was not in vain. Although it was said that the parties did not intend to discuss the issue of Saakashvili, but, apparently, such a conversation took place.

Now on the agenda was the question of strengthening the anti-Russian alliance between Georgia and Ukraine. And such a “fighter for democracy”, like Mishiko, can be sacrificed for that. So Saakashvili’s “unexpectedly” lie appeared in a statement about granting Ukrainian citizenship.

Or maybe Mr. Poroshenko was so impressed, having been on the border with South Ossetia, that he suddenly realized that Saakashvili was an international criminal? Well, yes it is unlikely - at Peter Alekseevich himself, his hands in the blood are not even up to his elbow, but to the very shoulders. Rather, Poroshenko could get a different impression. Saakashvili lost his criminal warAs a result, the border between Georgia and South Ossetia was formed. So maybe the head of the junta junta felt in this and for himself a completely clear sign? So I decided to get rid of the ominous character before it was too late.

In any case, the fate of Saakashvili is very indicative: the traitors have another and should not. Even if he succeeds in proving something with the help of his lawyers and restores Ukrainian citizenship, this will only mean a short-term change in the political wind. Meanwhile, one of the deputies has already offered to give Saakashvili status ... non-citizen Of Latvia.