July 26 2017
105
The American company Bell Helicopter has begun ground tests of the forward-looking convertoplane V-280 Valor, being developed for the US Army. According to Aviation Week, the device is currently undergoing tests of on-board equipment, components and assemblies and will soon rise into the air, reports N + 1

The V-280 is being developed as part of an FVL tender as a new army transport aircraft designed to quickly transport fighters and cargo over long distances. According to the requirements of the military, such a device should be capable of vertical takeoff and landing. Also participating in the tender is the Sikorsky / Boeing consortium, which is developing a high-speed helicopter SB> 1 Defiant. 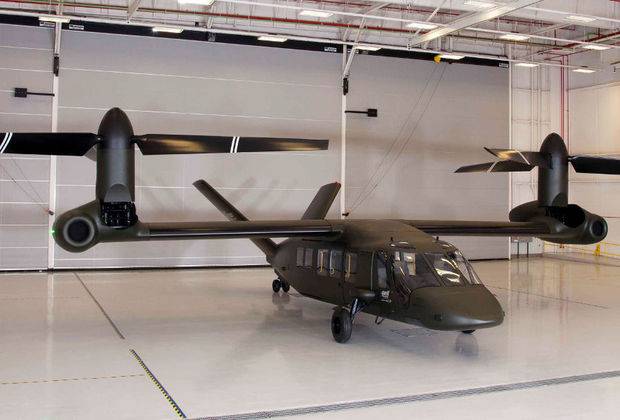 Bell Helicopter presented the draft of the Valor convertiplane in the spring of 2013 of the year. It is expected that this unit will be able to fly at speeds up to 519 kilometers per hour, and its combat radius will be 1,5 thousands of kilometers with a ferry range of 3,9 thousands of kilometers. The V-280 engines will be stationary: when moving from helicopter to airplane mode, only the propellers will be tilted.

The United States today is still the only country that has armed converters - V-22 Osprey, developed and produced by the Bell / Boeing consortium. In July, 2015, the five convertible plans Osprey acquired Japan. The military of this country liked such devices due to maneuverability, speed and undemanding to the landing sites.

Own convertoplanes are currently being developed by the Italian company Leonardo-Finmeccanica. She creates AW609 devices that will be used for passenger and medical shipments. In 2019, several AW609 search and rescue versions will be supplied to the Joint Aviation Command of the United Arab Emirates Armed Forces.