Special representative of the Trump administration "discovered America" ​​in the Donbass

July 26 2017
9
At the weekend, the special representative of the US administration in Ukraine, Kurt Volker, visited the part of the Donbass controlled by the Ukrainian authorities and even gave a press conference in Kramatorsk on Sunday. World media immediately replicated the assessment by Volker of the conflict in Ukraine. “My observation is not a frozen conflict, but a hot war,” the American special representative defined the situation. “There are killed, wounded, the economy and industry have been destroyed.” 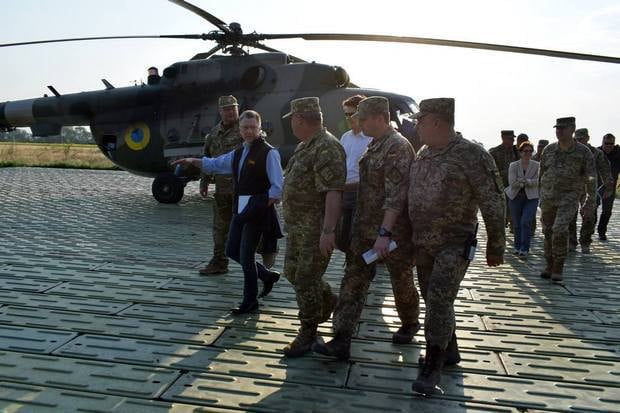 Recognition by a high-ranking American official of a long time obvious fact was hardly surprised by anyone in Russia. Here they know well about the “hot war” in the Donbass, so Volker, as it is said in such cases, “discovered America”. The special representative of the United States had the opportunity to make sure that not only the Minsk truce, but even the widely publicized “grain truce”, announced in the conflict zone at the time of harvest, does not work.

As representatives of the Kiev authorities who accompanied him on the Donbas trip in Kramatorsk reported to Kurt Volker, only a day 19-20 July in the area of ​​Krasnogorovka, Marinka and Novgorod were killed nine Ukrainian servicemen. In total, over May-June-July, units of the Ukrainian Armed Forces and volunteer battalions lost over five hundred people killed and wounded.

They say that Volker was impressed with the data on losses in the ranks of the Ukrainian military. Nothing is known about the reaction of the US Special Representative to the death of Donbas civilians. Meanwhile, the mournful list of people killed by the Ukrainian army as a result of artillery and mortar shelling of settlements continues to grow.

In April, speaking at a meeting of the Valdai International Discussion Club, OSCE Secretary General Lamberto Zannier said that since the beginning of this year, 140 civilians had died in the conflict zone. Later, the OSCE special representative in the tripartite contact group on Ukraine, Martin Saidik, spoke about the alarming dynamics of the death of Donbas civilians.

According to Saidik, civilian casualties have more than doubled over the year. More precisely - at 120 percent. “This is the result of the continued use of heavy weapons and the delays in demining,” Interfax was quoted as saying by the OSCE Special Representative. However, there is another reason for such a rapid increase in civilian casualties.

In late January, units of the Ukrainian armed forces attempted to go on the offensive and take control of the so-called “gray zones”, which are, in fact, the territory of the delimitation of the parties to the conflict. Especially fierce battles took place near Avdiivka. They fought for the industrial zone, near which is located Yasinovatskaya interchange - an important transportation hub of the region.

According to observers, there have been no such serious clashes since August 2015, when the Kiev authorities conducted massive shelling of the DPR settlements. By the way, Martin Saidik also let it slip. He named Avdiivka (along with Yasinovataya and Svetlodarsk) among the three zones where the bulk (85 percent) of all violations of the use of heavy weapons occurred.

However, even these tragic events were only fragments of the bloody civil conflict that the current authorities of Ukraine unleashed in the east of the country. The United Nations keeps its bitter statistics. According to the UN, as a result of the conflict in the Donbas, which counts from 2014, over 33 affected thousands of people, almost a third of them died.

Against the backdrop of these terrible figures, the revelation of the American emissary of the “hot war” in the Donbass is perceived, at least, as yesterday's news. However, even more surprised by the plans of the "peacemaker" from Washington.

More gasoline in the flames of war

This was Kurt Volcker's second trip to Ukraine. In early July, he visited Kiev with Secretary of State Rex Tillerson and even lingered there for three days to get a better understanding of the situation. The current assignment of the special envoy of the US administration (from 21 to 24 in July) was limited to a similar timeframe. Only this time, Volker turned to the practical "restoration of the sovereignty of Ukraine and its territorial integrity" and even matured to public statements.

At first, as we remember, there was his press conference in Kramatorsk. On Monday - an interview for the Air Force. Here, Volker was also not distinguished by new ideas. He told British journalists that Washington is actively considering the possibility of sending Kiev weapon to help fight pro-Russian militants.

According to Kurt Volcker, the supply by the United States of weapons for the Ukrainian army "would help stop Russia, which threatens Ukraine." Exactly a year ago, Senator John McCain, now ill, also articulated. Volker then worked as executive director of the McCain Institute for International Leadership at the University of Arizona.

This institute not only absorbed the name of the “hawk” senator in its pompous name, but also accepted its political attitudes. With them, Kurt Volker returned to high politics. Volker is no stranger here. He managed to work in five US administrations. Engaged in issues of European politics and security. He earned a reputation as an expert in the field of international relations, national security and European and Eurasian affairs, as well as a reputation as a “hawk”.

This quality of Kurt Volcker was fully manifested this April at a hearing in the Senate Foreign Relations Committee. Volker there called on the Donald Trump administration to "resist the challenges of Russia" and even gave examples of "Russian aggression." There was a place for Georgia, Moldova, Ukraine ...

With these political attitudes, Volker moved from Arizona to Washington and took a high place in the controversial administration of President Trump. Today it reminds a team without a coach, where everyone is free to play his game. Because of this confusion and whirlwind, resignations have already begun in the immediate circle of Donald Trump.

While they touched the faces of the second echelon. On Tuesday, CNN, citing sources in the US administration, sounded the information that US Secretary of State Rex Tillerson could retire early. The reason for this is the repeated disagreement between Tillerson and Donald Trump. They also concerned the appointments of the undersecretary of state.

Perhaps Kurt Volker is aware of the topic, as soon as he showed unprecedented independence and, in spite of the opinion of the Secretary of State, he spoke about the delivery of lethal weapons to Kiev. To go this way is to splash gasoline into the flames of war. Sane politicians overseas understand that this step will strengthen the Ukrainian authorities in their thoughts to resolve the conflict in the Donbas solely by force, which will bring new blood and new innocent victims.

Volcker, by the way, knows about such sentiments in Washington. In an interview with the Air Force, he regretted that the weapon might not be sent to Ukraine because of the fear of the American establishment to “annoy Russia”. However, it’s not at all afraid of “annoying” anyone. Even Volker at the Air Force agreed that peace can be established in the east of Ukraine only through a new strategic dialogue with Russia.

This topic is not very popular in today's Washington. Today, they dream of victories, bargains and the priority of American interests over others. So far, the emphasis is on solving problems with the help of force, and not strategic dialogue. With his intention to supply weapons to Kiev, the special representative of the US administration in Ukraine, Kurt Volker, confirmed this very clearly. Then he did not discover America.